About Mohamed A. El-Erian 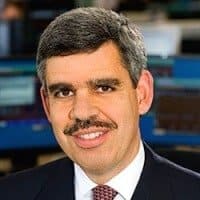 Once again, Greece is at an inflection point. With its cash balances severely stressed, it seems unlikely to be able to pay the cascading debt payments that are falling due over the next few months. So yet another round of contentious and protracted discussions with its creditors is underway – one that may well produce […]

During a recent visit to the United Kingdom, I was struck by the extent to which the question of whether the country should remain in the European Union is dominating the media, boardroom discussions, and dinner conversations. While slogans and sound bites capture most of the attention, deeper issues in play leave the outcome of […]

There is a simple truth beneath the growing human tragedy of Europe’s refugee crisis, and the European Union cannot address the massive influx of exhausted, desperate people in a manner compatible with its values unless governments and citizens acknowledge it. Simply put, the historic challenge confronting Europe also offers historic opportunities. The question is whether […]

From blaming him for the renewed collapse of the Greek economy to accusing him of illegally plotting Greece’s exit from the eurozone, it has become fashionable to disparage Yanis Varoufakis, the country’s former finance minister. While I have never met or spoken to him, I believe that he is getting a bad rap (and increasingly so). […]

Like many readers, I still vividly recall when Nokia was the dominant player in mobile phones, with over 40% of the market, and Apple was just a computer company. I remember when Amazon was known only for books, and when dirty taxis or high-priced limousines where the only alternative to public transport or my own […]