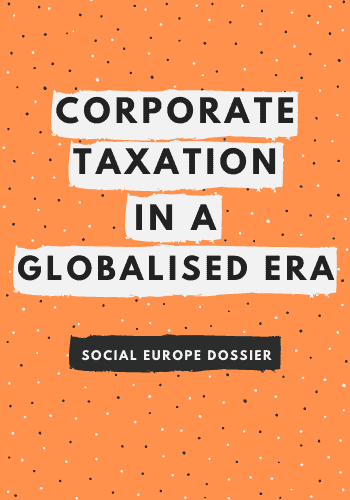 The taxation of business has rapidly risen up the global political agenda. Several factors have lain behind this trend, after decades in which it became widely assumed that footloose capital would simply be deterred by ‘excessive’ corporate taxation, which consequently should fall on much less mobile labour—or simply fall, at the expense of purportedly ‘inefficient’ public services better delivered in any event by corporate contractors.

First, it is now evident that deference to capital in this regard did not just mean this or that state would not suffer disinvestment. On the contrary, a global ‘race to the bottom’ on corporate taxation ensued, severely undermining the world’s tax base—as the need for investment in global public goods, notably a viable ecosystem, became all the more pressing. This was facilitated by opaque multinational accounting systems, which allowed, for instance, transfer pricing and synthetic intellectual-property valuations to ensure that company profits were massively concentrated in low-tax states.

Secondly, the salting away of liquid capital in the world’s secrecy jurisdictions became less hidden from public view, due to the capacities of modern, globally-collaborative, big-data investigative journalism, such as reported in the ‘Panama Papers’ and ‘Lux Leaks’. The huge extent of this wealth capture defied any claim that reduced capital taxation in the end ‘trickled down’ to the world’s poor via investment and job creation.

Indeed, it became apparent, thirdly, that light corporate taxation was creating perverse incentives towards merely rent-seeking behaviour by shareholders and chief executives, as dividend payments and remuneration packages flourished for what came to be called the ‘1 per cent’. Thomas Piketty famously showed in his Capital in the 21st Century how what had been confiscatory rates of tax on capital at the end of the second world war, particularly in Europe, were replaced by a world in which ‘r>g’, with spiralling inequality the inevitable outcome.

This trend was magnified by the increasingly high-risk speculation in derivative products associated with an ever-more financialised capitalism—especially in its Anglo-American variant—in which companies ‘too big to fail’ operated as if entitled to an implicit public subsidy should they bet the house and lose, leading to the emergence of ‘Occupy Wall Street’ and its offshoots.

Finally, the digitalisation of capitalism in the 21st century created at vertiginous speed a small number of Californian mega-corporations, benefiting from such first-mover economies of scale and network effects that they rapidly became not just national but global monopolies, able thereby to extract huge rents while desertifying large parts of the ‘ecosystem’ of small and medium enterprises in sectors from media to bookselling.

This dossier thus looks at the various proposals which have emerged or are emerging to deal with this challenge, whether and how they are viable and, if so, how they can be implemented, on at least a European and preferably a global scale.

You are here: Home / Library / Corporate taxation in a globalised era