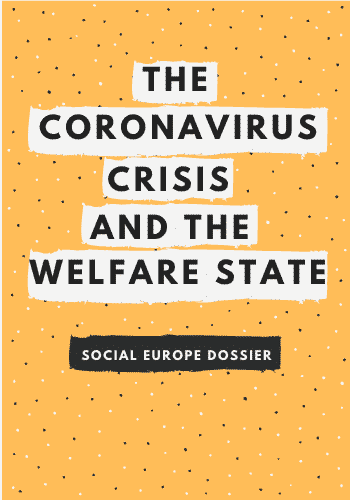 The coronavirus crisis has highlighted the flaws in European welfare states, which can spur their renewal and reinforcement after decades of cuts and privatisation.

It has foregrounded how increasingly threadbare social safety nets and precarious labour markets have left many marginalised and even destitute. This has strengthened the claim of those who have argued that we need a ‘social investment’ welfare state, rather than one focused on the rescue of individuals downstream. Universalism in welfare is also shining through, with social-insurance systems failing labour-market outsiders and market-liberal systems failing more still: Denmark has seen no excess deaths due to the coronavirus whereas the UK has suffered one of the highest excess-deaths ratio in the world.

The pandemic has further spotlighted the gender assumptions behind all welfare-state discussions. The fact that the home has been far from a safe haven during the crisis for women experiencing intimate-partner violence has only been one of the ways the interaction of the public and the private spheres has been made manifest. And with so many on short hours or ‘furloughed’, how non-socialised domestic labour is shared becomes a live issue.

This Social Europe Dossier addresses what a 21st-century welfare state should look like for all of Europe. Underpinning all these considerations is a vision of a welfare state which provides equal autonomy for all to pursue their life goals, in solidarity with others. That means developing a new progressive narrative which can consolidate a social coalition behind the new vision, in the way ‘the people’s home’ allowed Swedes to picture in their minds the national welfare state of their (then) future.

How can EU member states arrive at one such ideal form, given their different starting points, and how can the union offer a lead in getting there? Social policy has conventionally been seen as a matter for the member states but the European Pillar of Social Rights has at least provided a rhetorical commitment to a social floor for the whole of the union, through which none should fall.

You are here: Home / Library / The coronavirus crisis and the welfare state