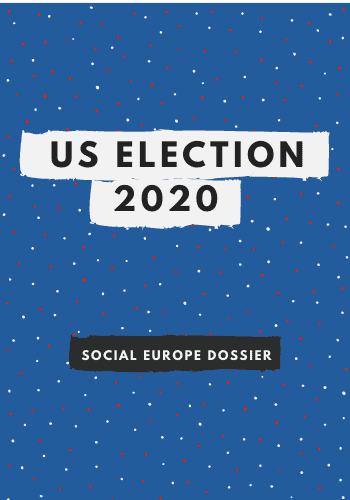 The three postwar decades of peace and prosperity in western Europe and north America—as they appear now—were built on a relationship between progressives on the two sides of the Atlantic Ocean. The era was defined by commitment to full (male) employment, with Keynesian demand management; falling inequality, with progressive taxation funding the delivery of public goods; and a liberal international order, based on the multilateralism of the Bretton Woods agreement.

Yet four decades ago a conservative transatlantic alliance, between the then president of the United States and the prime minister of the United Kingdom, took a scythe to that order, in favour of market fundamentalism, major tax cuts for the wealthy, spiralling inequality and the atrophy of public institutions. This deregulated world became increasingly crisis-prone and chaotic, fostering the global mistrust and rise of nationalistic populism in which Donald Trump could be elected president in 2016.

In co-operation with the Washington, DC office of the Friedrich Ebert Stiftung, Social Europe explored the 2020 United States elections, the potential for a reinvigorated transatlantic relationship and a political turning point for the USA in the wake of compounding domestic crises, continuing fights for social justice and the dubious policy legacy of the Trump administration. The 2020 elections and the environment in which ballots were cast was not simply a referendum on the Trump administration but also a stress test for American democracy, while a global pandemic stripped away any remaining pretences surrounding the American economy, healthcare system and rudimentary social state.

The series aimed to examine different facets of the elections: from the electoral and governing alliances between moderates and progressives required to win and then govern from 2021 to the question of how workers and union members would vote. It looked at the issues of race and politics in the American context and combating strategies of voter suppression endemic in the US political system. In considering the issue of climate change as part of a just transition, part of a vision of a Green New Deal, the series also addressed global issues—including the transatlantic relationship, the future of social democracy in the transatlantic space and a reinvigorated international order.

In the wake of the November polls, the series concluded with analysis of the prospects for a Biden presidency, the challenges of Democrats’ weak performances at state level and the tumultuous events of January 6th 2021.