Since the onset of the euro-crisis, the old debate pertaining to the supra-national stabilisers in the euro-area has gained new relevance. While economic textbooks have long stipulated that countries forming a monetary union need an alternative mechanism for dealing with asymmetric shocks and even the early feasibility studies on Economic and Monetary Union EMU had demanded a supranational transfer scheme (MacDougall 1977), EMU came into existence in the late 1990s without such a scheme.

By now, most observers agree that the euro-crisis was (with the exception of Greece) not the result of irresponsible fiscal policies, but the consequence of problems in the banking systems which resulted partly from national boom-and-bust-cycles. Hence, for a more sustainable and better-functioning monetary union, a growing body of literature now asks for mechanisms to dampen booms and bolster recessions.

One of the widely debated proposals is the introduction of a European basic unemployment insurance which will replace part of the existing national schemes.[1] Under the administration of such a system, a certain share of contributions to the unemployment insurance would be paid to a European fund instead of the national systems. Unemployed individuals in participating member states would also then be entitled to receive benefits from the European system.

The European system would be designed in such a way that an individual is required to be insured under the system for a certain number of months prior to the stint of unemployment in order for the basic unemployment insurance to be administered. Benefits would be defined as a certain share of past earnings, up to a certain limit defined as a share of a country’s median income. These replacement payments would be limited to a relatively short time frame, e.g. one year. 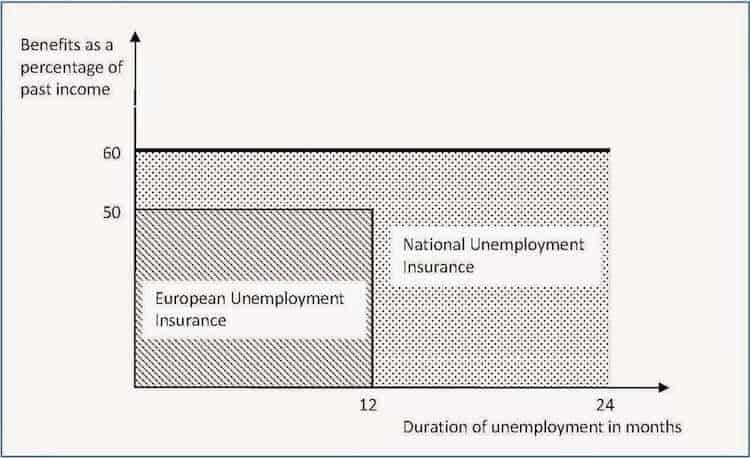 This set-up would assure a number of critical points. First, it would make sure that the scheme’s generosity is automatically adjusted to a country’s level of GDP per capita. As the unemployed in poorer countries can be expected to earn lower wages, their replacement payments would also be lower in the case of unemployment and the converse would apply. As the maximum benefit level is tied to median income in a country, maximum benefits in rich countries would be higher than in poor countries.

Second, it would allow member states to keep a large degree of discretion over the level of social protection in their own country. If a country desires a higher level of protection than is provided by the European unemployment insurance (e.g. as we have now in France, the Netherlands or Germany), it could easily do so by topping up the European benefits. The only constraint is that a single country cannot cut the generosity of unemployment benefits below that of the European insurance.

Fourth, while some countries would make net payments to other countries, for the euro-area as a whole, the introduction of the system would leave the fiscal burden for employees and business overly unchanged. As the system just replaces part of already existing national systems, both with regards to payouts and contributions, the overall costs would remain unchanged and moreover, the contributions towards unemployment insurance could be expected to remain constant.

As regards to membership, ideally, the European unemployment scheme would be introduced at least for all euro-area countries. However, it could also just be introduced for a sub-group of the euro-area or for a larger group, including countries which have a fixed exchange rate towards the euro and hence could need some additional macroeconomic stabilisation as well.

The proposed unemployment insurance would clearly contribute to macroeconomic stabilisation among the participating countries. In a downturn, the net amount a country is paying into the system would decrease as the first contributions from this country will be utilised for the purpose of contracting employment, and second, payouts would increase with rising unemployment. This would support purchasing power in a country and hence stabilise GDP. In a boom; increasing employment would lead to higher net payments into the system, first by higher contributions and second, by lower payouts. This would drain purchasing power from the country in question and limit overheating of the national economy.

While in principle such stabilisation could also be provided by a purely national system which is allowed to borrow in financial markets during a downturn, experience from the recent years tells us that this is not necessarily sufficient. First, we have learnt that a downturn can be so severe and the related deterioration of a country’s fiscal position so stark that countries are effectively cut off from financial markets and are forced to cut expenditure pro-cyclically. Second, as euro-area countries are now subject to strict fiscal rules, room for new borrowing (even in a recession) is limited.

Clearly, this scheme would not support the most vulnerable in the labour market such as the long-term unemployed, but it is not intended to do so: It is a macroeconomic tool, not a social policy tool. Thus, indirectly, it also helps the long-term unemployed and the young: If it stabilises output and employment overall, it makes it also easier for the most vulnerable to find new employment.

By now there are a number of studies which try to gauge the stabilisation impact of such a proposal. Most studies agree that such a scheme would not always have a strong stabilising impact on the business cycle, but would have been highly effective in bolstering the downturn in some of the hardest-hit crisis countries over the past years, had it been in place at the onset of the global economic and financial crisis of 2008/9. For example, in Spain, the downturn of 2008/9 could have been reduced by more than 25 percent, depending on certain assumptions. Depending on assumptions, average annual transfers through this system would be between €20 and roughly €50 billion and could be financed by a payroll tax between 0.7 and 1.7 percent.

Of course, there are a number of contentious issues. Active and passive labour market policies differ strongly between the member states and it is an open question in how far they are compatible with such a basic European unemployment insurance. There also might be moral hazard issues: If the larger part of unemployment benefits is covered by the European level, national unemployment administrations might become reluctant to use activation policies for the unemployed. Moreover, there might be a danger that the national level tries to “play” the system, e.g. by putting unemployed into temporary employment to make the again eligible for the European benefits.

Yet, in contrast to other fiscal transfer schemes proposed by other authors based on, for example, the national output gaps such as Enderlein et al. (2013), the European unemployment insurance has some clear advantages: The logic is easily understandable to the wider public and unemployment figures are not subject to revisions. Moreover, the transfers would be to individuals having earned entitlements on the payments, not by national governments, bringing it closer to the people. Thus, while the proposals in their current form are far from ready for implementation, the debate about them will go on

[1] The following paragraphs draw heavily on Dullien (2014a).

MacDougall, D. (1977), Report on the study group on the role of public finance in European integration, chaired by Sir Donald MacDougall. Economic and Financial Series No. A13, Brussels: Commission of the European Communities.

This column was first published by the Global Labor Column.