Media reports indicate that the stand-off between the new Greek government and its creditors is going to the wire. At stake is Greece’s continued membership of the euro area. Much has been written on the lack of progress and understanding between the two sides. In many cases reports are based on little more than gossip, often launched, one can safely surmise, with an explicit view to influencing the outcome of the negotiations. Seemingly every conceivable argument has been dragged into the debate, no matter how far back in history.

What is needed is a focus on mutually beneficial solutions. And as a precursor to that policymakers urgently need to get a proper sense of perspective, and this with regard to three dimensions in particular. First, the risks of Greek exit. Second, the size of financial transactions at stake. And third the different time horizons of the different policies under discussion.

The risks attached to Grexit are incalculable. They are subject to what economists call “fundamental uncertainty”: we cannot draw up a remotely plausible schedule of costs and their likely probabilities as we can only guess how “Grexit” would play out. What is fairly certain is that the short-run costs for the already battered Greek population would be substantial. The remainder of the euro area might now be in a stronger position to initially weather the immediate economic and financial fall-out of exit and default (although this is by no means certain).

The fact remains that the nature of the monetary union will have fundamentally changed. With exit and default established as policy options, every incipient crisis will immediately lead to a wave of destabilising speculation. With a devalued currency and restored monetary autonomy it is conceivable that Greece, after a further economic contraction, enjoys a strong recovery. This, too, would strengthen the centrifugal forces in the remainder of EMU. Under these circumstances nobody would countenance painful adjustment and austerity followed by default and exit. The rational thing for an indebted member state to do in future would be to exit early. For these reasons there is an unquantifiable but certainly very substantial risk that Grexit would be merely a prelude to the unravelling of the currency union as a whole. (On top of these considerations come a range of geopolitical issues relating to Russia and the Balkans that I will not dwell on here.)

The question is: what could possibly justify – if we assume a reasonably high degree of rationality on the part of the actors involved – taking such risks, either on the Greek side or that of its European “partners”? The implication must surely be that the cost of reaching agreement is extremely high. Except that on any rational basis it is not.

Consider. At immediate stake is the disbursement of aid totalling EUR 7.2 billion. This support had already been agreed, but is being withheld because the new Greek government has rejected adhering to the conditions of the agreement. Almost certainly additional funds will be required subsequently. However, past debt rescheduling agreements mean that Greece’s repayment schedule is very light after a spike in the next few months. Moreover, it needs to be recalled that, prior to the recent exacerbation of Greece’s economic problems, which was caused by the political stand-off, the country was posting a small primary surplus and had returned to modest economic growth. Given extremely low interest rates, the basic conditions would therefore be in place for a steady reduction in debt-GDP ratios.

For the sake of argument, let us almost treble the immediate lending volume so that we are talking about a round number: EUR 20 billion. That is a very large number, right? No it is not. The claim that it is reveals the disastrous failure of politicians and the media to get a sense of perspective. First of all it ought to be obvious that it pales into insignificance compared with the risks identified above. It is akin to a householder refusing to pay, say, EUR 200 in insurance premiums although s/he knows their EUR 350,000 domicile is at high risk of being hit by a tornado.

Secondly, we need to evaluate the loan requirement against the background of what is happening in parallel to the Greek stand-off. In a desperate attempt to avoid deflation and kick-start recovery, the European Central Bank is purchasing EUR 60 billion worth of government securities every month. It intends to do so for a period of at least 18 months. In other words, what would be necessary to tide Greece over for the next few months and put in place the minimal conditions for economic recovery is being “spent” by the ECB every ten days. (By the way Greek bonds are excluded from such central bank purchases.) Or the EUR20 billion represents less than 2% of the envisaged volume of QE. 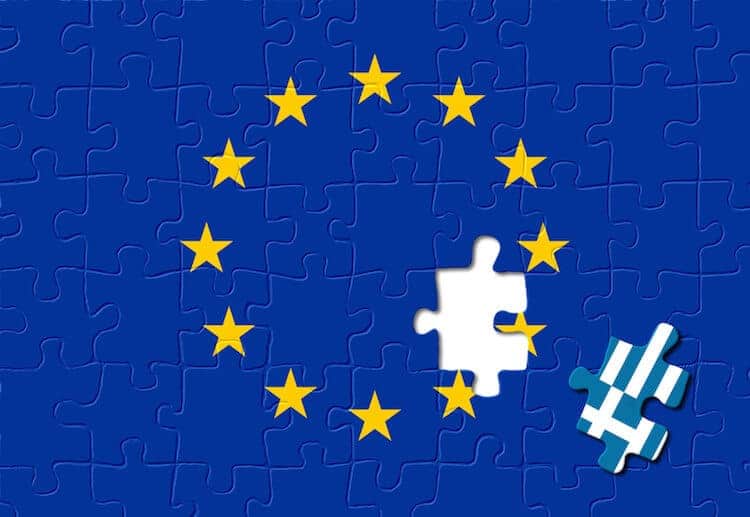 The Greek situation needs to be put into perspective according to Andrew Watt.

More generally, the euro area as a whole and the periphery in particular are in dire need of higher nominal spending and investment. Meanwhile solvent sovereign governments can borrow long-term in real terms for nothing. Indeed investors are even paying to park their money with safe-harbour governments. Under such conditions it is a no-brainer – at least in macroeconomic terms – to provide funding to support spending and investment in Greece and indeed elsewhere in the euro area. Yet politicians and the media are claiming that providing further support for the Greek government and the people who elected it constitutes an unbearable burden. This is cognitive dissonance on a massive scale – or if not it is something more sinister and nefarious.

The last element on which a sense of perspective urgently needs to be gained relates to the differing time scales of bailouts, so-called structural reforms and their (posited) economic benefits. Greece has long-standing supply-side weaknesses. And it has a short-term liquidity problem. (Contrary to what is widely claimed it does not have a fundamental insolvency problem, provided something like normal economic conditions can be re-attained, which requires actions by other actors and not just Greece.) Economic reforms, if they are to be effective, need to be carefully designed. They need time to be implemented and, above all, they need time to make their effects felt. A considerable literature suggests, plausibly, that in depressed economic conditions, even reforms that make sense long-term can have negative short-run effects (because they weaken demand). Somewhat similar considerations apply to the issue of privatisations (which may make sense long-term, but not as a fire-sale). Lastly, in recent years – and again contrary to much media commentary – Greece has undoubtedly carried out many so-called structural reforms (see also here).

Given all this, the seemingly common-sense deal “money for reforms” is actually very hard to implement in practice and can be highly problematic. In purely economic terms at least, the whole furore about “lists” of reforms makes little sense as a way to ensure fiscal sustainability. Such demands are driven by political, not economic considerations. The way to achieve sustainability in the timescale we are considering – namely weeks and months – is by removing the Damocles Sword of default and exit and boosting aggregate demand. This is not hard to understand: it is exactly the same enlightened-self-interest thinking that underpinned the post-1945 Marshall plan.

On structural reforms themselves, sensibly, Greece has turned to the ILO and the OECD to seek advice on a reform program that is longer-term in orientation and, hopefully, less driven by ideological preconceptions about effective supply-side structures than at least some of the measures imposed in the last few years. A very good starting point would be the 200-page ILO report “Productive Jobs for Greece”, which goes out of its way to emphasise the medium-to-longer-run nature of the reform process and the need for action by European partners, not just within Greece itself.

Critical decisions need to be taken by policymakers in Greece and the EU in the coming days and weeks. It is vital that these decisions are based on a realistic assessment of the various costs/risks and benefits of the different courses of action. Currently, alas, the debate appears to be dominated by a poisonous mix of moralising, grandstanding, macroeconomic illiteracy and (self-)deception. This will have to change very quickly, otherwise we are, entirely unnecessarily, in entirely uncharted waters. The history books will not be kind to those responsible. Think for a moment about how history regards those responsible for international negotiations after the First and after the Second World War. What is needed is simply a deal that gets Greece back on its feet again. The costs of such a deal are minimal, the benefits huge, not just for Greek citizens but for those of all EMU countries.