Ireland is often regarded as a success story for Eurozone austerity, compared to the total failure of Greece. That can lead to nonsense like this: instead of whingeing, the Greeks should buckle under and get on with it as Ireland has done. An alternative narrative is to explain the different experience of the two economies by looking at structural factors, as in these two examples.

Whether you can describe Irish unemployment rising from 12% in 2009 to 14.7% in 2012 as a success is of course moot. But Ireland does give us a clear example of how austerity is supposed to impact an open monetary union member, according to standard theory. A permanent reduction in government spending or higher taxes will increase unemployment, which will reduce wages and prices. This will improve competitiveness, leading to higher external demand for Ireland’s products (and less imports) which will eventually replace the lost demand due to austerity. However, because wages and prices are ‘sticky’, this adjustment will not happen quickly.

The fact that Ireland is now growing strongly and unemployment is falling reflects this process. The OECD estimates that growth in 2014 was nearly 5%, and this was greatly helped by a 12% increase in the volume of exports. In this sense Ireland’s response to austerity has been textbook. The interesting question is why Greece has been so different. Here is growth in the two economies (all data comes from the OECD’s Economic Outlook). 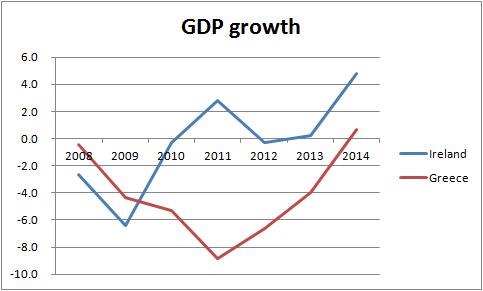 Of course the 2009 recession affected everyone, but from 2010 until 2014 the Irish experience was bad, but for Greece it was a disaster.

The most important reason for the difference is straightforward: there has been a lot more austerity in Greece. Here is one summary measure: the underlying government primary surplus. 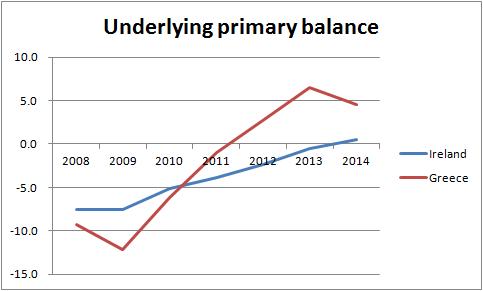 Looking at this measure the fiscal contraction between 2009 and 2013 in Greece has been 2.7 times greater than in Ireland. This measure is not ideal because the impact of tax changes can be smoothed, but looking at changes to government consumption gives a similar picture.

In both cases we have had what economists call ‘internal devaluation’, which is the improvement in competitiveness that I described earlier. Here is what has happened to wages. 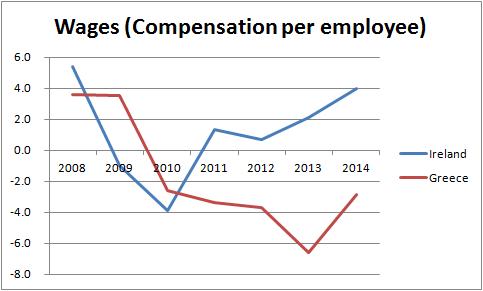 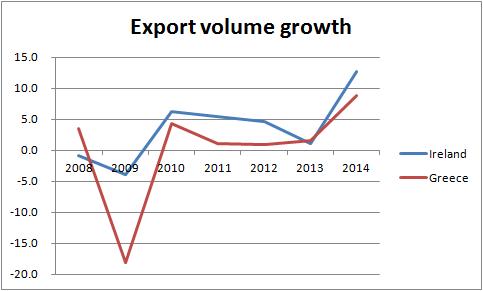 The pattern is similar, but if anything the improvement in exports has been greater in Ireland than Greece.

Is this where stories of structural weaknesses in Greece come in? In one sense yes. Greece certainly exports less than you might expect given the usual (‘gravity’) models that economists use to explain such things, as this European Commission study shows. The study also argues that you can explain this finding by institutional weaknesses in Greece’s economy. That in turn is one factor behind a very important difference between Ireland and Greece. Ireland is much more open, which means that any percentage increase in exports will have a much bigger impact on GDP and employment than in Greece. (It also receives much more foreign direct investment.)  In technical terms, if the slope of the Phillips curve is similar in both countries, Greece’s adjustment was always going to be more difficult, because it is a much less open economy.

However it is not clear why these structural differences should make Greek exports less responsive to any change in wages. What appears to explain this puzzle is that competitiveness in Greece has improved much less than in Ireland, even though the fall in wages has been greater. Theodore Pelagidis at Brookings has an explanation: other non-labour costs have gone up to offset these lower labour costs, particularly energy prices. He writes:

part of the adjustment program Greece had proceeded to significantly increase excise taxes on energy used in productive activities…..The resulting evolution of exports in energy intensive sectors like steel and textiles is most revealing. In spite of the large fall in wages, the rapid increase in energy costs meant that exports of these commodities, price takers on the international market, plummeted…..These two sectors largely account for the stagnation of Greek non-fuel exports.

To what extent these increases in energy taxes were sanctioned by the Troika is unclear. However one of the measures imposed as part of the latest agreement is an increase in VAT for the tourist industry, which of course will also hit competitiveness in that industry. In both these cases, austerity measures have and will actively hinder the way the economy adjusts to fiscal consolidation.

To sum up, the main reason Greece has suffered so much more than Ireland is that the amount of austerity imposed on Greece has been much greater. Any recession is also likely to be greater because Greece is a less open economy, so a larger internal devaluation is required to offset the impact of austerity. One final factor is that large cuts in wages have not been translated into improvements in competitiveness, in part because of the way austerity was implemented.