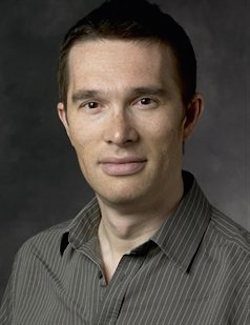 The fall in productivity in the UK following the Great Recession was particularly bad, whereas the hit to jobs was less severe. This column discusses recent research exploring this puzzle. Although the mystery has not been fully solved, an important part of the explanation lies in the flexibility of wages combined with very low investment.

With some economic recovery having finally got underway, the UK is still feeling the repercussions of the so-called ‘Great Recession’. National output, as measured by GDP, fell by over 7% from its peak in January 2008 – the biggest fall since the inter-war years – and only returned to its pre-crisis level in April 2014 (NIESR 2014). This has been the slowest recovery in this century (see Figure 1).

Figure 1. The profile of recession and recovery 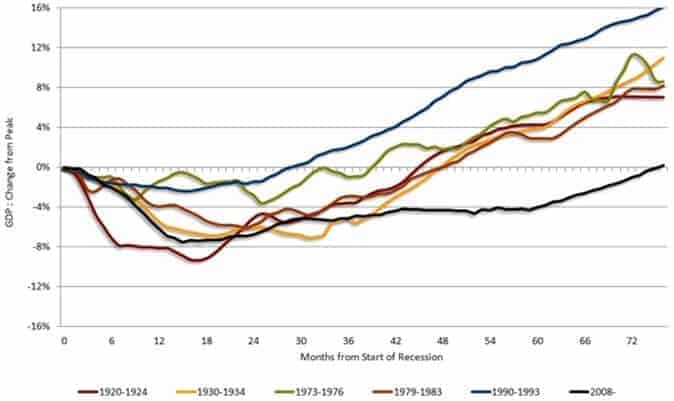 Based on the experience from past recessions, we would have expected unemployment to have soared into double digit territory. In fact, the labour market has held up surprisingly well. Unemployment peaked at 8.3%, which – although unacceptably high – is lower than the unemployment during the 1980s and 1990s recessions, even though these took less of a toll on output.

The flip-side of the unemployment picture is the so-called ‘productivity puzzle’. Labour productivity as measured by output per hour worked has collapsed: It is about 4% lower than it was pre-recession and according to the Bank of England, 16% below what would have been expected if past trends had continued (ONS 2014, BBC June 2014).

Productivity does tend to fall or stagnate initially in recessions, primarily due to ‘labour hoarding’ — firms are reluctant to fire skilled workers that they may have to re-hire again later. But it is unusual for this to have lasted so long. And while many countries have experienced a hit to productivity and jobs, the fall in productivity in the UK was particularly bad, whereas the hit to jobs was less severe.

It’s all about the labour market

Between the second quarter of 2008 and the third quarter of 2013, average hourly wages in the UK fell 8.5% in real terms – that is, after taking (CPI) inflation into account (Hardie et al. 2014). The experience of almost a decade of real wage stagnation is unprecedented in the UK. In most other major European countries and the US, real wages have already regained their pre-recession levels.

One potential explanation that is often given for falling or stagnant real wages in the UK is the relatively high net migration rates that followed since the expansion of the EU in 2004. But net migration has fallen since 2008 and in any case, there is little evidence that immigration depressed wages or jobs for British workers over the past decade. The fact that other countries with high net migration have not seen similar wage falls also makes this an implausible explanation for the changes seen in the UK.

What is even more surprising is that average wages have fallen despite a shift in the composition of the workforce towards more skilled workers (who tend to be higher paid). This means that the same workers must now be doing the same or similar jobs for lower wages. Blundell et al. (2014) find that among workers who stayed in the same job between 2010 and 2011, one third saw their wages fall or stay the same, and another third saw their wages rise by less than the rate of inflation (thus experiencing a real wage freeze or cut). Moreover, these changes occurred across all demographic groups, in all industries and occupations, and for both high- and low-paid workers. Wage inequality and income inequality have fallen slightly during the Great Recession.

The effects on productivity and jobs

Lower real wages seem to have helped reduce lay-offs because they have made it cheaper for firms to hang on to their workers even in the face of falling demand. But low wages also made it relatively cheaper for firms to take on more workers rather than invest in new capital or technologies.

This trend is reinforced because the cost of investment has also increased for many firms. Although the Bank of England has kept the base interest rate near zero, and has tried to get this passed on by printing money (quantitative easing), the actual cost of capital seems to have increased.

The Bank estimates that the cost of capital has increased by two percentage points (from 8%) for large firms, with the challenges even greater for smaller firms. This is at least partly a result of the tougher standards introduced to ensure that banks hold sufficient levels of capital to cover risky lending, which helps to explain why investment in the UK has fallen by about 25% from 2008 levels and remained low until the beginning of 2013 (Pessoa and Van Reenen 2014). Investment has started to recover in 2013, and in 2014 it was about 81% of the 2008 levels (ONS 2014b).

The upshot of this is that the price of labour (wages) has fallen and the price of capital has increased, so firms have had incentives to substitute cheaper workers for more expensive machinery and buildings. And while this means employment is much higher than we would have otherwise have expected, it means that productivity has been depressed as a result of less investment per worker.

In our recent study at the Centre for Economic Performance (CEP), we argue that once this is taken into account, productivity changes in the UK since 2008 are not so different to the picture in the 1980s and 1990s recessions (Pessoa and Van Reenen 2014).

Why are workers willing to accept lower real wages?

But why have so many workers been willing to accept lower wages? One possibility is that the recession and slow recovery may have led people to revise down their expectations of future income, meaning that they are willing to work for longer, or accept lower wages to stay in work.

It has long been established that rising unemployment exerts downward pressure on wages. Gregg et al. (2014) find that the sensitivity of real wages to rises in unemployment has increased since the early 2000s. In fact, it has more or less doubled, such that an increase in unemployment from 4.5% to 8%, roughly what the UK has experienced over the last few years, is estimated to reduce wages by 10% now, compared with about 5% in the 1990s recession.

Their study also explores the sensitivity of wage movements to deviations in regional level unemployment from the nationwide picture and finds similar results. This suggests that wages are now more sensitive to local unemployment conditions, and they are not just driven by the nationwide economic cycle.

So the combination of slower trend growth in wages, associated with extremely poor productivity performance, with increased downward pressure from unemployment, means that the economic pain in this recession is felt in terms of falling real wages rather than fewer jobs. Part of the explanation may lie in the fact that the loss of income from unemployment has risen over time, as unemployment benefits – which in the UK are not linked to previous salaries, as they are in most countries – have risen more slowly than wages.

Meanwhile, administrative pressure on benefit claimants to take low-waged work rather than hold out for a better paid job has steadily increased. This means that workers may be more likely to trade lower wages to keep their jobs now, compared to previous recessions. Moreover, trade unions are far weaker and less prevalent than they were in previous recessions when they were more able to keep wages rising even in the face of low demand. Firms are then using plentiful and relatively cheap workers to meet demand (rather than investing in new machinery etc.), producing the outcomes of falling real wages, poor productivity, and modest increases in unemployment.

In the long run, productivity growth is the most important driver of material wellbeing, so it is worrying that UK levels of GDP per hour have fallen so much. But the flip-side of this is positive in the short run. Unemployment is lower than we would have expected for such a big fall in output.

Much of the explanation for this seems to lie in the increased real wage flexibility and lower investment seen in the UK in recent years. The key issue is whether real wages, investment, and hence – productivity – recover when the economy not only returns to robust growth, but also recovers the ground lost through this extended period of economic stagnation. If real wages do not recover, it would signal a lost decade, against the backdrop of otherwise continually rising living standards that the UK has experienced since 1945.

This column was first published on Voxeu.org