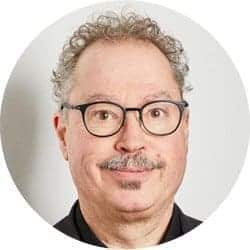 Like many other advanced economies around the world, the Eurozone is experiencing a productivity slowdown. Data from the ECB show that labour productivity growth has practically halved over the last 20 years. Some economists have suggested that low productivity growth is a sign of “secular stagnation”, a state in which further increases in productivity will be negligible – caused by a slowdown of population growth and sluggish technological progress. And some have concluded that since productivity and broad wage increases are linked, stagnating productivity threatens the prospects for reducing income inequality. 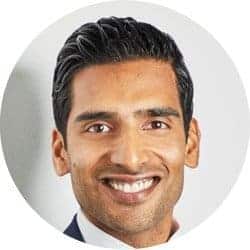 Yet, a deeper look into economies around the world uncovers a striking phenomenon: some firms are unscathed by the productivity misery. They constitute a frontier segment of firms that manage to achieve remarkably high productivity growth and show no sign of slowing down. In fact, OECD research finds that the gap between these elite firms and the rest is widening (see figure below). In services, the top 5 percent of firms – the frontier – increased productivity by more than 40 percent between 2001 and 2013, whereas the remaining 95 percent managed about 10 percent. Novel research suggests that this trend can also drive income inequality: employees in the top firms are likely to benefit from stronger wage growth than those working for the average firm – a mechanism that some now refer to as “rent-sharing”. 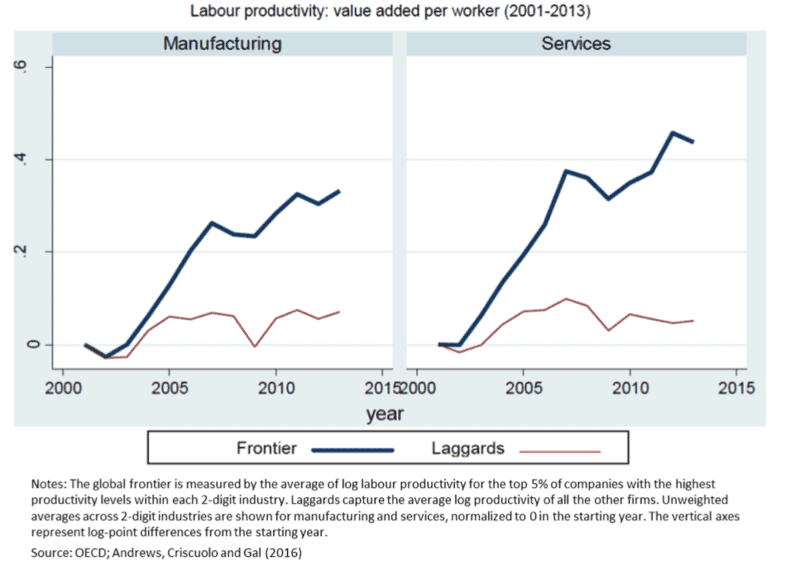 There is further evidence that growing disparities between firms drive inequality. In many industries, so-called “superstar” firms are claiming larger shares of a market for themselves. These firms are highly innovative and productive – think tech giants like Apple and Google, or Walmart and Starbucks in the offline world. They pay high wages, which are, however, lower than their productivity growth would imply. Thus, wages make up a small share of the large value added of superstar firms. As a result, the growing industry-wide weight of these firms drives down the labour share of income, the slice of the “economic pie” that goes to employees. Its counterpart, the capital share, grows at a higher rate – and since capital tends to be concentrated at the top of the income distribution, a lower labour share is likely to result in higher income inequality. 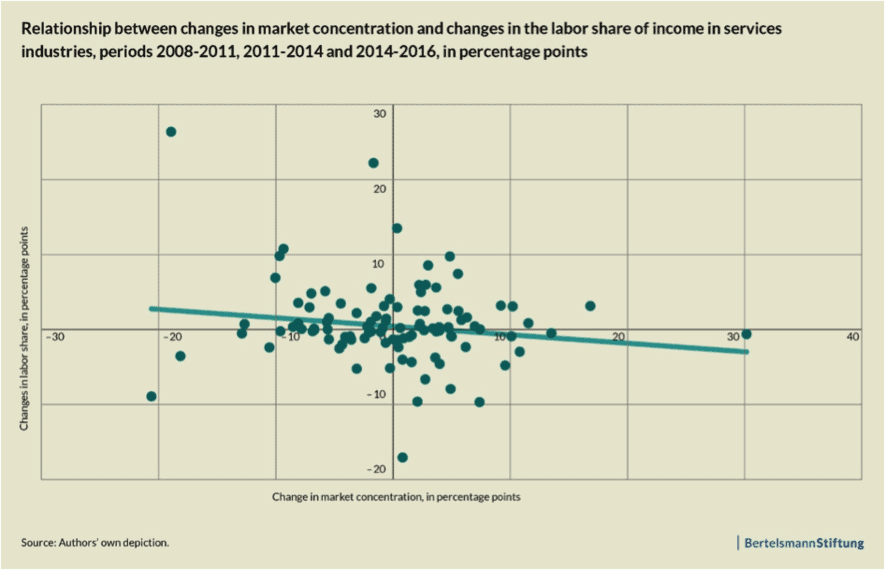 New research at Bertelsmann Stiftung suggests that superstar firms emerge as many markets increasingly become “winner-takes-all” and competition between firms weakens. The study looks at industry-level microdata from Germany and shows that sales in many service industries became more concentrated over the last decade. Importantly, where market concentration increases, the industry-wide labour share of income falls – a relationship that holds for services, which are shown in the figure below. Each data point represents the combined change in market concentration and labour share within a service industry over a specific period of time (e.g., from 2008 to 2011). We underpin the general pattern on the graph using a more sophisticated statistical analysis that yields the same result: when competition weakens, the labour share goes down.

We also run a back-of-the-envelope calculation to estimate what the decline in the labour share means for affected employees. All other things being equal, we find that increasingly concentrated markets in Germany have cost employees potential wage increases amounting to a total of 11 billion euro between 2008 and 2016. The figure below depicts foregone wage increases for employees in select industries. For instance, an employee in the warehousing industry has had to face foregone wage increases of about 1,600 euro between 2008 and 2011 – which translates into a loss of approximately 5 percent of her/his total gross salary in 2008. There also exist industries with falling concentration rates, which has led to particularly strong wage increases. For example, employees in financial services enjoyed wage increases that were about 2,800 euro higher than those expected in 2008. 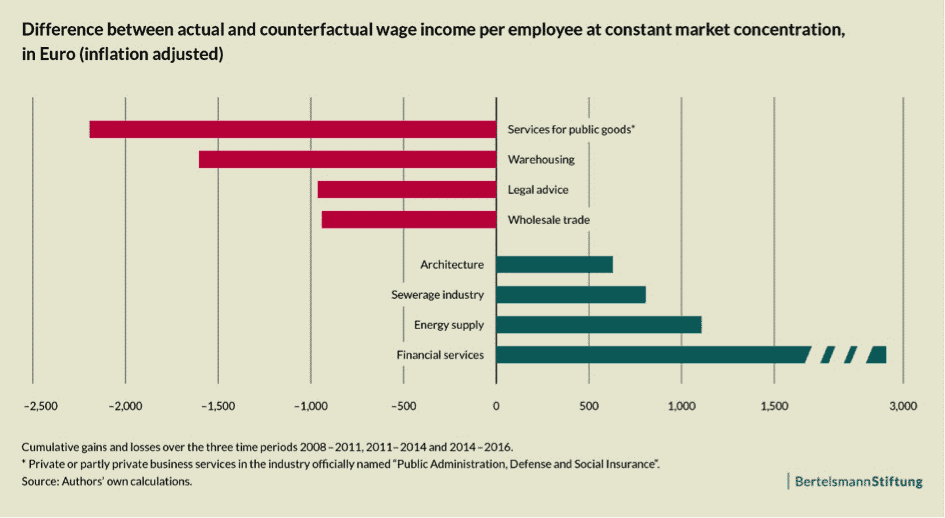 So how do frontier or superstar firms arise in the first place? One likely factor is digitalization. Firms with a competitive advantage have always existed, but digitalization allows customers across value chains to identify a superstar service or product more easily – think online price comparison services on the internet. In fact, we find that the stronger digitalization picked up in an industry, the higher the decline in the industry-wide labour share. Crucially, the data suggest that such elite firms do not become dominant due to “unfair play”. Instead, industries in which sales get more concentrated tend to show higher average productivity, pointing at frontier firms being truly more efficient and innovative than the rest.

What can policymakers at the EU level do? Efforts are being discussed about moving towards more innovation through knowledge diffusion, education and permanent individual and corporate upskilling. But these policies must be targeted at the average firm: Superstars easily adopt cutting-edge innovations, but innovations do not trickle down to less productive firms. This calls for innovation policy being more inclusive so that laggard firms can catch up. This could also benefit regional development, which appears to be becoming more important: A recent study by the McKinsey Global Institute suggests that superstar cities are emerging across Europe, potentially exacerbating regional disparities. The successor of the EU’s Horizon2020 program for research and innovation will become one of the largest schemes of its kind and should focus on broad innovation and productivity growth across EU regions. Effectively clustering firms, universities and governments across regions and value chains can contribute to achieving this goal.

Adequate new regulation is also important. Superstars can become so dominant that small, innovative firms are deterred from entering an industry, hampering innovation in the economy. Thus, regulation must care for competition, low entry barriers and infancy support for start-ups – in other words, regulation must become a “common good” of a level playing field in an ever more digitalized EU economy. Moreover, policy makers are grappling with the taxation of digital behemoths and disruptive business models. Novel approaches to efficient taxation of data exist and must be discussed. Finally, the decline of the labour share may continue. It will be crucial for many in the workforce that trade unions press for wages growing in line with productivity.