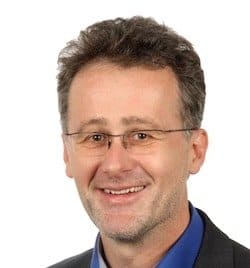 Of course, it is not easy to strike a fair balance when qualifying the Swiss referendum of 9 February 2014: Is it all about xenophobia of rather rich Swiss people? Or are there “real problems” to be faced?

It is all too obvious that the true political motivation of the right wing parties across Europe is deeply rooted in xenophobia. But was this the only reason of the positive outcome of the SVP initiative? I have my doubts.

Of course, there is an economic divide running through Europe with rich countries like Germany, Austria and Switzerland on the one hand and poor countries like Bulgaria and Romania on the other. The GDP per capita in Switzerland with some 41,000 € (in PPP) is more than three times higher than in Romania (12, 900 €); poverty rates differ accordingly. What could be the real meaning of European solidarity if not transfers and investment going to the poor countries which are financed by rich countries? But is migration the right solidarity mechanism?

So what could be the real reasons for the outcome of the Swiss referendum beyond and above vague fears of foreigners?

In 2011, 27.3% of the Swiss population had a migration background, in Germany and the US the proportion is about half (some 13%), in Austria 16% (Source: OECD Migration Outlook). Recently, net migration rates in Switzerland were around 9% of population, in Germany around 2% in Austria and United Kingdom some 4% (see figure below). In Switzerland, the net inflow (immigration minus emigration) was some 66,000 in 2011, the gross immigration amounted to 148,800. 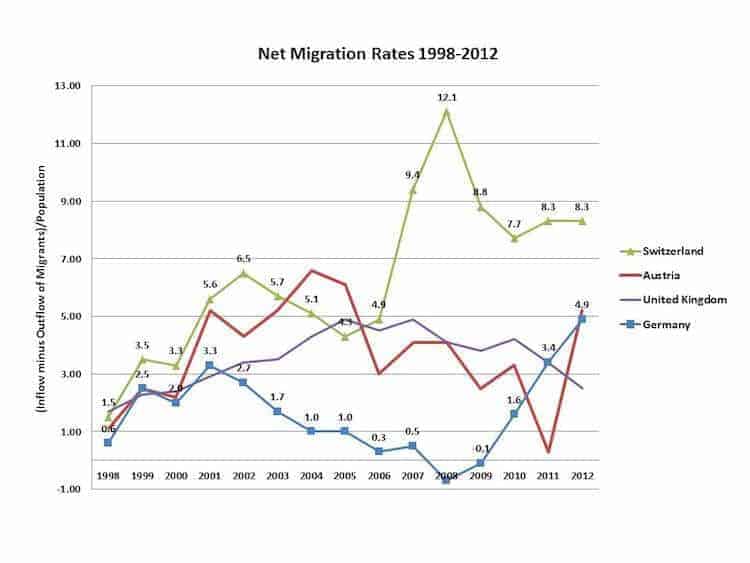 Who benefits from migration? The rather simple answer to this question is: In the receiving countries, the employers and the migrants will take the advantage. For the employees, additional labour supply, coming from abroad or not (!), has a dampening effect on wages; and the risk of becoming unemployed will increase; competitive pressure increases irrespective of the qualification level of immigrants: if highly skilled enter the country, the wages of highly skilled residence will be squeezed;  Reichensteiner, Rieger, and Ambrosetti rightly point out to these effects in their comment on the people´s initiative (Reichensteiner, Rieger, Ambrosetti).

And the sending countries have to face sometimes huge “brain drain” effects, as is the case in Romania e.g. for doctors. The concept of “return migration” is not successful in particular when the economic situation in the sending country does not improve in a satisfactory way. The population in Romania shrank by some 11% since 1998, in Switzerland it increased by 13% – this development does not seem to be sustainable!

Does immigration lead to additional employment for native people through complementary effects or do the immigrants take the jobs of the nationals because of their low wages (substitution effects)? The assumption that all immigration leads to extra employment for natives is extremely unrealistic. Only in case of strong economic growth, complementary effects will prevail. The recent figures show non-negligible substitution effects: In Switzerland, since 2010 three-quarters of employment growth was due to recruiting foreign workers. And the situation in other countries is similar. Although these are stock figures (which hide large gross flows into and out of the labour market) it is extremely unlikely that no substitution is at work.

Are skill shortages and demographic forecasts relevant? Yes and no!  As there are no strong signs of wage pressures (probably the only real measure for skills needs) in sectors with occupational shortages and as future demographic forecasts are notoriously misleading, it is more propaganda than reality to stress these aspects – as the EU-Commission is doing on a permanent basis. Above that, immigration can solve demographic problems only to some extent – given the fact that very large immigration waves for many years are highly unrealistic politically!

To sum up: If European solidarity is a necessary condition for integration, why not finance this kind of “Marshall-Plan” by strongly increasing property taxes and marginal income taxes for the rich? Migration is a bad instrument for doing the job because low income employees have to carry an extra burden through additional competition from immigrants with low wages. This investment plan financed by rich people might even have positive political effects on forthcoming elections for European Parliament.

Johannes Schweighofer is a senior economist at the Austrian Ministry of Labour and Social Affairs. His main responsibilities are international labour market policies (EU, OECD, ILO) and research. He is a long-standing member of the EU-Employment Committee and the OECD Working Party on Employment. Recently, he has published articles on labour market effects of immigration, youth employment and the effectiveness of labour market programmes. He writes in a strictly personal capacity.