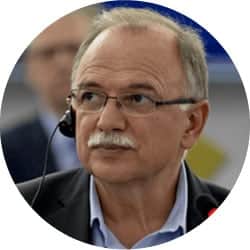 In January 2015 Syriza came to power with the aim of tackling austerity, bringing back social justice and growth, building on a challenging but necessary reform package, addressing sky-rocketing unemployment and poverty, fighting corruption. The task seemed impossible, but what we have witnessed so far is a government that fights against the odds every single day to keep its people and the economy alive.

The tough deal signed last summer between the Greek government and the institutions entailed additional fiscal measures, but also a series of reforms that previous governments partly agreed to in the past years but never implemented. The Greek government is now implementing a full-scale reform package that extends from the re-organization of the media landscape, based on rules of transparency, the insertion of a merit-based system in the public administration, health reform and free access to relevant services for more than 1.5m citizens deprived of health coverage, vulnerable groups, and refugees as far as the protection of the banking system, pension reform, legislation on the refugee issue and the speeding up of the fight against corruption, tax evasion and clientelism.

Corruption Scandals and the Challenging Reforms

We can hardly find a country and a government that has managed to deal with so many issues and tasks in such a short period of time. One of the major problems of the Greek political system is the deep-rooted links between a corrupted political elite, the political parties that governed Greece for the past 30 years, a number of media magnates and a group of bankers and political advisors that have created an extensive chain of anomie and bribery. The government is trying to dismantle this pathogenic chain via the new media law, the promotion of the role of justice, the proper use of Falciani and Borjans lists in order to deal with tax evasion and increase government income receipts.

In a similarly challenging field, the Greek government is introducing a reform that includes the required regulations that will render the pension system viable and self-sustaining in the long run. Given that billions of euro have been lost during recent decades in different scandals and cases of mismanagement, the aim is to secure that all people should have access to a minimum pension and that new generations will be entitled to receive a pension. Under the current, appalling conditions, it is highly probable that not only pensioners could see their primary pension at risk, but also younger taxpayers would find access to a state pension denied.

The Conclusion of the First Review of the Greek Program

For more than one month Greece and the European institutions have found common ground, but the IMF seems reluctant to agree and, moreover, it pushes for additional austerity measures to exhaust any will for compromise and suffocate Greek society and economy.

Considering the balance of power among the negotiating parties and the clear intention of all other sides to conclude the review, it’s up to the IMF to decide whether it will remain or not as a technical advisor in the programme after the successful conclusion of the first review. Nonetheless, it has to be noted that after five years of austerity programs in Greece, the European institutions have gained the necessary know-how and capacity to deal with such programs operationally, a fact that further weakens the IMF’s irrational stance and gives space for the European partners and Greece to move on without the Fund.

The Greek government has consistently implemented the bailout requirements since last July. It is now time for the institutions to proceed to the successful conclusion of the first review, thereby opening a new chapter for the Greek government: the fight to significantly reduce unemployment and trigger investments in the domestic economy. The European Commission’s growth forecast is positive for Greece, beginning from the second half of 2016, a fact that needs to be coupled with a proper strategy to bring in investments. Greece has great potential, a dynamic human capital and competitive areas that can flourish under conditions of political and economic stability. The Greek government is determined to move on in this direction, and investors should show trust in Greece now more than ever.