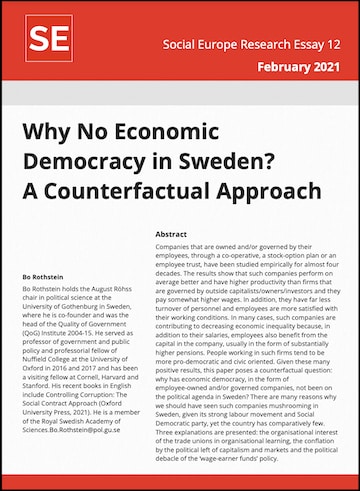 Companies that are owned and/or governed by their employees, through a co-operative, a stock-option plan or an employee trust, have been studied empirically for almost four decades. The results show that such companies perform on average better and have higher productivity than firms that are governed by outside capitalists/owners/investors and they pay somewhat higher wages. In addition, they have far less turnover of personnel and employees are more satisfied with their working conditions. In many cases, such companies are contributing to decreasing economic inequality because, in addition to their salaries, employees also benefit from the capital in the company, usually in the form of substantially higher pensions.

People working in such firms tend to be more pro-democratic and civic oriented. Given these many positive results, this paper poses a counterfactual question: why has economic democracy, in the form of employee-owned and/or governed companies, not been on the political agenda in Sweden? There are many reasons why we should have seen such companies mushrooming in Sweden, given its strong labour movement and Social Democratic party, yet the country has comparatively few. Three explanations are presented: the organisational interest of the trade unions in organisational learning, the conflation by the political left of capitalism and markets and the political debacle of the ‘wage-earner funds’ policy.

Bo Rothstein holds the August Röhss chair in political science at the University of Gothenburg in Sweden, where he is co-founder and was the head of the Quality of Government (QoG) Institute 2004-15. He served as professor of government and public policy and professorial fellow of Nuffield College at the University of Oxford in 2016 and 2017 and has been a visiting fellow at Cornell, Harvard and Stanford. His recent books in English include Controlling Corruption: The Social Contract Approach (Oxford University Press, 2021). He is a member of the Royal Swedish Academy of Sciences.

Sören Holmberg is senior professor in political science at the University of Gothenburg, with a research focus on quality of government and electoral democracy. He has been guest scholar at Harvard University, the Brookings Institution and the University of Michigan.

You are here: Home / Library / RE No. 12: Why No Economic Democracy in Sweden?