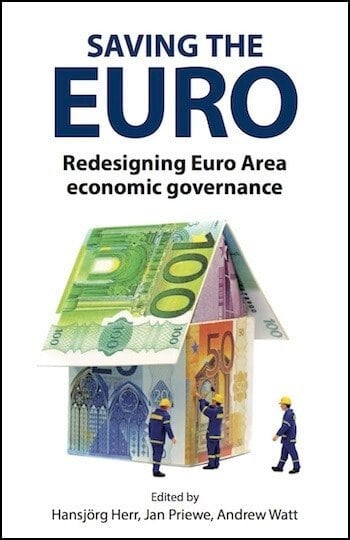 With growth picking up in many countries the “Euro crisis” is now over, apart from the matter of Greece. That’s the view of many observers and analysts, it seems. Euro Area reforms, especially Banking Union, are sufficient by themselves to stabilise the common currency. Reform of the zone’s institutional design, they suggest, can wait. The authors of this book pursue a deeper analysis of the underlying problems still at work and come up with more far-reaching reform proposals and consider their implementation more urgent.

Many members of the Euro Area experienced almost a lost decade of economic output. Key factors behind the current upswing are the new monetary policy of the European Central Bank, the low value of the Euro with an unsustainable current account surplus, and the milder, more accommodative social policy interpretation by the European Commission of the overly strict legal rules. To some extent, this upswing is no more than recuperation from the deep decline post-2008. These temporary beneficial factors mask deep structural problems in the Euro Area’s institutional design.

The authors of this book urge a re-design of the Euro Area that is capable of solving the problems at their roots. A key issue is overcoming the implicit neoliberal bias in the Maastricht Treaty of 1991, pursuing the then prevailing Zeitgeist, especially in Germany, and re-embracing Keynesian economic philosophy. Breaking up the Euro would merely step back into the problems we had twenty years ago. Reforms discussed here include monetary and social policy, wages policies, measures to curb trade imbalances and – in general – deepen integration towards a political union. Without a democratic common government, adapted to the diversity of nations in Europe, a common currency cannot thrive. The long-run future of the Euro and Euro Area will inevitably remain bleak if timidity and narrow-minded thinking along beaten tracks prevail.