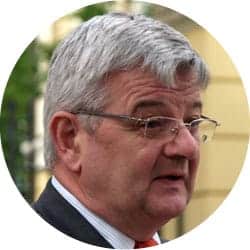 There are only a few months left until the United Kingdom formally exits the European Union. So far, the debate about Brexit has been framed mainly in economic terms. Should the UK crash out of the bloc without a mutual exit agreement, the damage will likely be significant. And, as matters stand, such an agreement is far from assured.

A “hard Brexit” would mean that at 11:00 P.M. (GMT) on March 29, 2019, the UK’s membership in all EU treaties – such as the customs union and single market – and international trade agreements concluded by the EU would end. Great Britain would become merely a third party, with far-reaching consequences for EU trade – not least chaos at the UK border.

But Brexit will of course have far-reaching political consequences, too. In terms of its day-to-day affairs, the EU is largely perceived as a common market and customs union. But at its core, it is a political project based on a specific idea about the European system of states. This idea – not the economics of the matter – is what Brexit is really about. And it is why the UK’s decision to leave the EU – with or without an exit agreement – will have a profound impact on the twenty-first-century European order.

The slim majority of Britons who voted for “Leave” in the 2016 referendum weren’t concerned with economic wealth, but with reclaiming full political sovereignty. They define sovereignty not in terms of objective facts about Britain’s present or future, but in terms of Britain’s past as a global power during the nineteenth century. Never mind that the UK is now a medium-size European power with little to no chance of ever becoming a global player again – be it inside or outside the EU.

If the rest of the continent were to follow the British example and opt for the nineteenth over the twenty-first century, the EU would disintegrate. Each country would be forced back into a cumbersome system of sovereign states struggling for supremacy and constantly checking one another’s ambitions.

Under such conditions, European countries would lack any real power, and thus would be retired from the world stage for good. Europe, torn between Transatlanticism and Eurasianism, would become easy prey for the non-European major powers of the twenty-first century. In a worst-case scenario, Europe might even become an arena for the larger powers’ fights. Europeans would no longer determine their own future; their fate would be decided elsewhere.

The old, declining European order of the nineteenth century originally emerged out of the Thirty Years’ War (1618-1648). The medieval system that preceded it, based on a universal church and empire, perished during the Reformation. After a series of religious wars and the establishment of strong territorial powers, it was replaced by the “Westphalian system” of sovereign states.

During the next few centuries, Europe ruled the world, and Britain itself was the dominant European power. Yet the Westphalian system was destroyed by the two world wars of the first half of the twentieth century – both of which were in fact European wars for world domination. When the guns fell silent in 1945, the Europeans – even the victorious European allies – had effectively lost their sovereignty. The Westphalian system was replaced by the Cold War bipolar order, wherein sovereignty rested with the two non-European nuclear powers: the United States and the Soviet Union.

The EU was conceived as an attempt to regain European sovereignty peacefully, by pooling the national interests of European states. The goal of this effort has always been to prevent a relapse into the old system of power rivalries, reciprocal alliances, and hegemonic head butting. And the key to success has been a continental system based on economic, political, and legal integration.

Brexit has thrown the material implications of this level of integration into sharp relief. Over the course of the UK’s negotiations with the EU, an old problem has re-emerged: the Irish question. Once the Republic of Ireland and the UK both belonged to the EU, the impetus for Irish reunification disappeared, and the decades-long civil war between Catholics and Protestants in Northern Ireland could be put to rest. The practical realities of EU integration meant that it no longer mattered which country Northern Ireland belonged to. But with Brexit throwing history into reverse, the spectres of the past are threatening to return.

Europeans should watch the Irish issue closely, because there is even more potential for a return of such conflicts on the continent. A new world order is emerging, and it will be centered around the Pacific, not the Atlantic. Europe has one – and only one – chance to manage this historic transition. The old European nation-states will be no match for the new competition unless they are united. And even then, achieving European sovereignty will require a massive and concentrated effort of political will and ingenuity.

Yearning for a glorious past is the last thing that will help Europeans confront the challenge they face. The past, by its very nature, is over. With or without the UK, Europe must see to its future.