In the wake of the formal invoking of Article 50 by Prime Minister Theresa May, no one knows with certainty the impact on the UK economy of leaving the European Union. Claims of imminent damage and possible disaster should be treated at best as informed speculation and at worst as more of the dysfunctional fear campaign that proved such an ineffective argument for “remain”.

Much of the anxiety comes from the initial negotiating postures by the British government and its more vocal continental counterparts, magnified by the media’s proclivity to seize on any prospect of extreme outcome. Among the more obviously diversionary are that the Spanish government might reassert claims to Gibraltar (taken seriously by the Guardian), and alleged British government hostility toward non-UK nationals (also hyped by the Guardian). In this anxiety-inducing context calls for calm are both rare and largely ignored (see for example, Larry Elliot’s discussion of trade outcomes).

Because of the near-universal predictions of difficult negotiations leading to a severely negative Brexit economic impact, criticism of the May government’s fiscal policy has almost disappeared from the media. Yet public attention in both Britain and on the Continent should also focus on the issue of whether government fiscal policy is helping or hurting?

Assessing fiscal policy begins with the obvious generalization that supply conditions set the constraints on economic growth in the long term, while in the short run the demand for goods and services determines the rate of economic expansion. When current production exceeds demand, the economy contracts or stagnates, and it expands when demand depletes inventories, stimulating greater employment and output.

Brexit worries come from an anticipated fall in exports relative to imports owing to loss of EU trade advantages, plus a possible decline in private investment caused by reduced business optimism. The third component of private demand, consumption expenditure, would tend to move with the other two, since exports and investments are the major drivers of household income.

Economies have a fourth source of demand, public expenditure. Brexit commentary has treated public sector effects as negative because of an anticipated revenue shortfall derived from lower growth, using a favourite but inappropriate “black hole” metaphor (cosmic black holes are not empty spaces – quite the contrary, they are unimaginably dense). This emphasis on revenue effects reflects the almost universal endorsement by the media of the balanced budget ideology: a fiscal deficit is ipso facto a serious problem.

If we go beyond the dubious economics of balanced budgets, we can ask a constructive question – how might fiscal policy contribute to stabilizing the UK economy should Brexit effects prove substantially negative? The question has an obvious answer and it is not ex-chancellor Osborne’s roof mending on sunny days (i.e. generating a budget surplus). Should exports fall or investment decline, or both, a counter-balancing fiscal expansion would be the appropriate action. As a transitional measure, public expenditure replaces private.

The behaviour of the two Conservative chancellors since May 2010 suggests that using fiscal policy to aid the stabilization of the economy is beyond their conceptual grasp, as it similarly appears to be among the eurozone finance ministers (“Eurogroup”). Even before the 23 June referendum, Jeremy Smith among others argued that fears of a “Brexit slowdown” obscure the much more obvious drag on the UK economy, fiscal austerity.

The numbers overwhelmingly support Smith’s “austerity slowdown” hypothesis, as the chart below demonstrates. The vertical axis measures the growth in central government revenue and expenditure since May 2010 when Chancellor George Osborne’s austerity ideology became policy. By January 2017 pubic revenue had increased by £166 billion, compared to £67bn for expenditure.

These numbers imply that over almost seven years Conservative chancellors took a net £100bn out of the economy, an extraction I label as “fiscal drag”. Far from fostering a stronger and more stable economy, Mr Osborne weakened it, relying with little success on private demand not only to recover its own momentum after the Great Recession of 2008, but to cover the public sector’s drag as well. 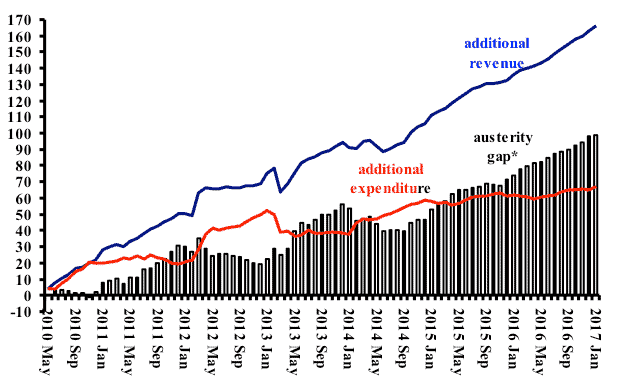 *Change in revenue minus change in expenditure.

A second chart again shows the seriousness of the burden that private sector demand had to overcome. During the 27 quarters from 2010Q1 through 2016Q4 the net public sector contribution to the overall demand for goods and services was negative in 21 of these. Three of the six quarters with positive net demand came consecutively in 2012, when Mr Osborne briefly reversed his austerity regime because the UK was economy returning to recession.

For the two quarters prior to these consecutive stimuli the growth rates were minus 0.1 and +0.2. Similarly, the two quarters of fiscal stimulus in 2014 followed a calendar year during which growth had hovered near recessionary rates (going negative in the second quarter of 2013). Circumstantial evidence indicates that Mr Osborne was well aware of public expenditure’s potential for rejuvenating growth, but remained loath to realize that potential except to prevent electoral disaster. 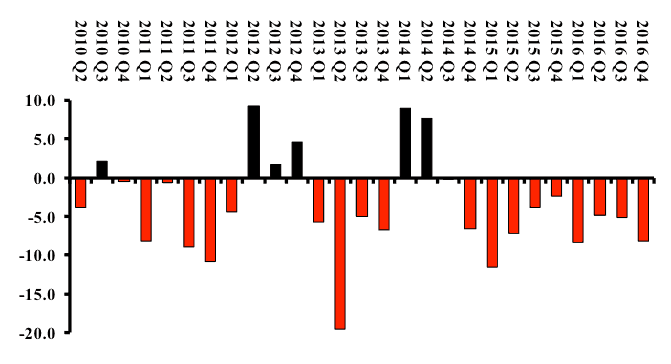 (change in expenditure minus change in revenue, £bns)

While not disastrous, the Osborne growth record qualifies as deeply unsatisfactory. During his six years as chancellor the average annual rate was 1.9%, compared to 2.8% for the six years prior to the Great Recession. Despite initial indications to the contrary, his successor follows in the great austerian’s footsteps, with a negative fiscal effect during the third quarter of 2016, followed by an even stronger contractionary effect in the fourth (-5.1 and -8.2 billion pounds, respectively).

While signals are mixed, a prudent person should not dismiss the possibility of a substantially negative Brexit effect on the UK economy. However, it is unlikely to be as great as the contractionary impact of government fiscal policy over the last six seven years.

Blaming Brexit for the low growth that is more likely to come from UK government policy carries a clear health warning for Eurozone citizens. The European mirror image of the Brexit hit to the UK economy would be instability and slowdown in EU economies. If the Brexit excuse allows the May government to escape criticism of its macro policies, the obfuscating message will not be lost on the advocates of austerity and balanced budgets in mainland Europe.