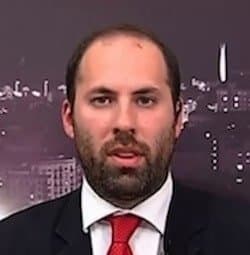 Two years have passed since Mario Draghi promised to do “whatever it takes” to save the euro. The bond markets have calmed down but the crisis of the euro zone has not yet abated. Isolated pieces of positive information do not automatically imply a sustained recovery let alone justify triumphalism.

While improving marginally, the rate of unemployment remains exceptionally high in historical terms. And continued growth cannot be taken for granted; even AAA countries like Germany, the Netherlands, and Finland have recently experienced quarters of negative growth. Ominously, various countries with large debt burdens (e.g. Greece, Italy, Spain, Portugal) are either in or on the verge of a deflationary situation.

The chart below shows the evolution of real GDP per capita in Europe since 2007. 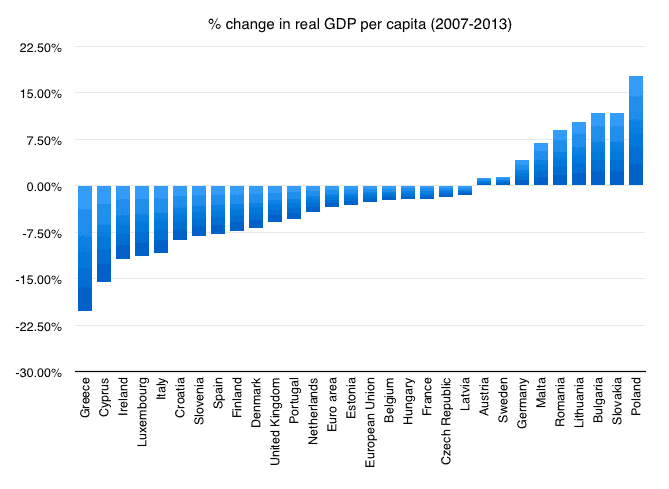 As can be seen, the vast majority of countries are worse off in real per capita terms since the beginning of the crisis. Germany is the most notable exception in the euro zone.

This exercise can also be repeated for the period since the creation of the euro. 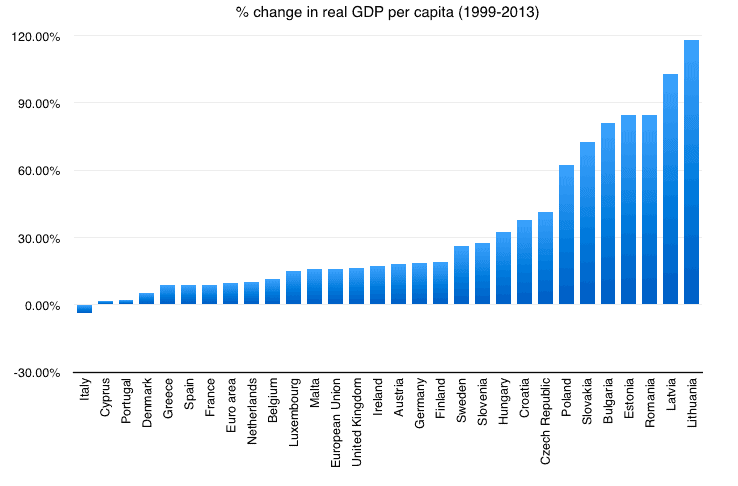 Here a clear divergence can be seen, with the countries to the east of the Iron Curtain displaying a much better performance. But for the euro area since its creation, the experience has now primarily been one of stagnation. If the institutional framework does not change, we should expect more of the same.

Another way to think about this is to look at how far we can go back to find a year when real GDP per capita was higher in a given country than in 2013:

For certain cases (most notably Italy) it is not just a question of a lost decade but already a question of lost decades. The danger exists that Perry Anderson’s pessimistic thesis holds: “Italy is not an anomaly within Europe. It is much closer to a concentrate of it.”

A very grim variant of rentier capitalism has been installed, combining a lack of dynamism and accumulation with an ever greater concentration of wealth. It is easy for “r” to be greater than “g” when “g” is 0. Prioritizing debt repayments over a broad-based increase in well-being is, by definition, an anti-growth strategy.

In the meantime, the longer the euro zone is permitted to lurch into deflation, the more urgent a programme of continental debt restructuring becomes. The triumph of the rentier will lead to the euthanasia of the euro zone economy and the continued fall in general living standards that this entails.