Many international economic institutions share the idea that collective bargaining should take place at the level of individual companies. For example, the OECD, as far back as its 1994 Jobs Strategy, pushed for more firm level bargaining by insisting that the instrument of administrative extension of collective agreements to all firms within a given sector should be phased out. For its part, the IMF rarely misses out on the opportunity to weaken sector level bargaining systems when a country is requesting its financial assistance.

Recently, however, the very same institutions that were active in promoting company-level bargaining are now publishing research that contradicts the idea that such negotiations necessarily improve labour market performance. The most recent analysis can be found in the 2018 OECD’s Employment Outlook of 4 July.

The OECD classifies countries into five different systems of collective bargaining, thereby also allowing the position of each country in this classification to fluctuate over the 1980-2015 period. This classification forms the basis for an econometric estimation of the impact that different systems of collective bargaining exercise on labour market performance, with factors such as the state of the business cycle, workforce characteristics, and the use of temporary contracts being controlled for.

Results are expressed relative to the system of full decentralisation. The latter is defined as a model where bargaining is essentially confined to the firm level with no or very little coordination from higher level organisations or government influence. 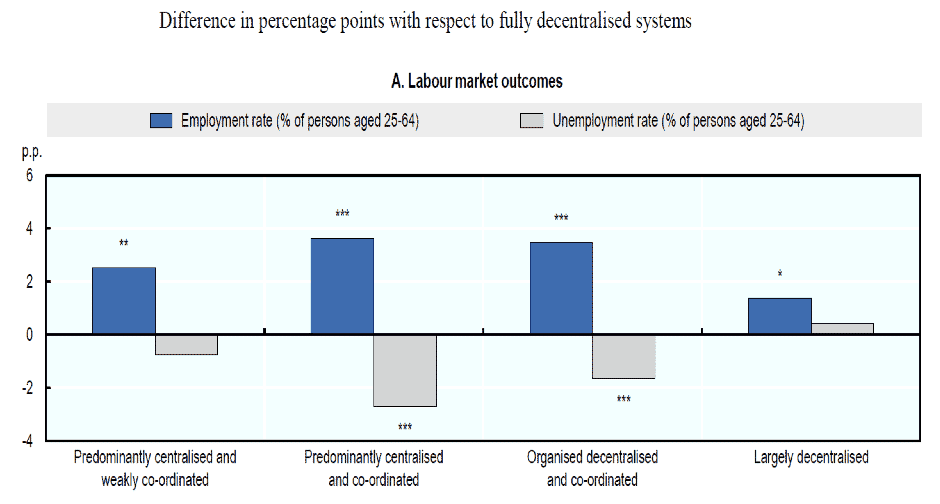 Company-level bargaining and the ‘Insider-Outsider’ divide

Trade unions are often accused of protecting those workers that already have jobs (‘insiders’) at the expense of more vulnerable workers who find it difficult to access the labour market (‘outsiders’).This new OECD research also contradicts this theory. Compared to fully decentralised bargaining, unemployment rates for groups such as youth, women and the low-skilled are significantly lower in coordinated and/or centralised bargaining systems (see next graph).

A previous Employment Outlook was also unable to demonstrate that company-level bargaining would save jobs in the event that economies are hit by a negative demand shock. Instead, the conclusion was that firms covered by centralised and multi-level collective bargaining agreements experienced a better employment performance in the four years from the 2009 crisis compared to firms with no collective bargaining agreement (see next graph). As argued by the OECD, short-time working schemes, where the government financially steps in to offset the impact on workers of reduced working hours and weekly pay, are driving this phenomenon of labour market resilience. And the presence of robust national and/or sectoral employer and trade union organisations, makes a policy dialogue to set up or implement such short-time working schemes much more straightforward. 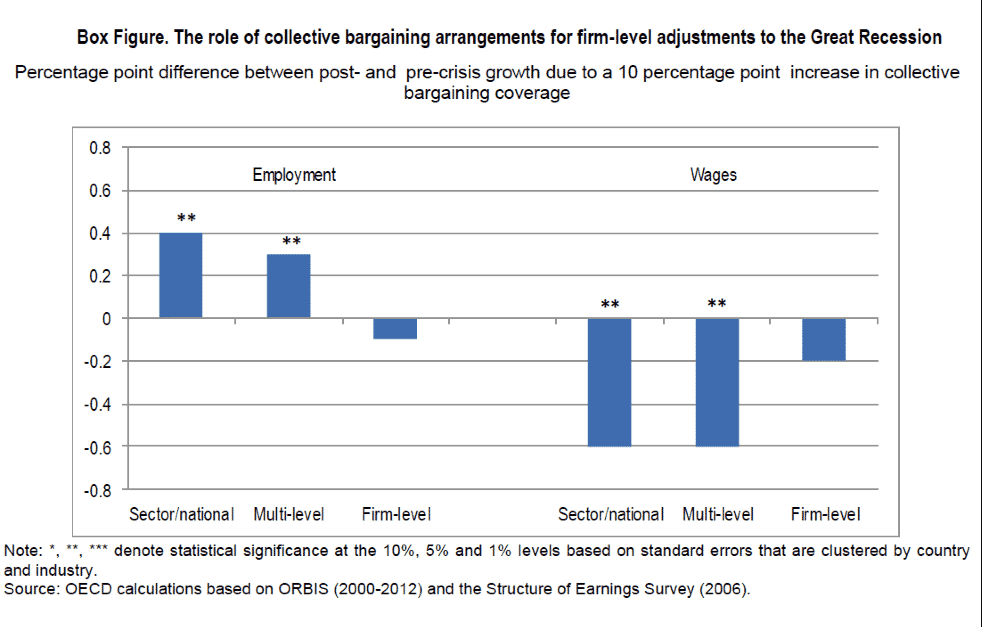 These findings need to be taken seriously. Especially where collective bargaining is concerned, one can no longer argue that higher inequalities are the inevitable price to pay for improved labour market performance as it is multi-employer and coordinated bargaining, not firm-level bargaining, that contributes to both stronger employment outcomes as well as lower wage inequalities.

Even more importantly, policy makers should, at the very least, stop advancing proposals that risk weakening or hollowing out systems of multi-employer bargaining. Here, unfortunately, there appears to exist a lot of ingenuity (and this includes the OECD itself, see here and here for comments), in particular when it comes to subjecting the administrative extension of sector agreements to all sorts of conditions such as threshold criteria, public interest tests that limit extension, allowing exemptions, derogations and opt-outs, different wage and working conditions according to size, region or age of companies. Such proposals weaken the role of common wage standards for the sector, thereby risking unbalancing current bargaining systems, reducing collective bargaining coverage, thus also weakening the capacity to coordinate. In other words, they would do exactly that which, according to the OECD research described above, is to be avoided: devolution of the bargaining system into uncoordinated, pure firm-level bargaining or, even worse, no bargaining at all.