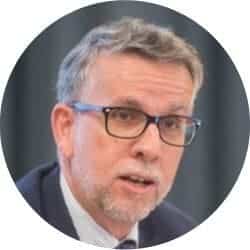 In his recent State of the Union address, European Commission President Jean-Claude Juncker laid out his vision for the EU over the next 12 months. The need to build a Europe that protects and empowers its citizens was at the very core of the address, focusing on the common values that we share in Europe, what unites a farmer in Lithuania with a single mother in Zagreb.

One such common value is that of equal participation in society and equality of opportunity; that we should have the same possibility to improve our lives and make progress in our careers regardless of our gender, ethnicity, religion, sexual orientation, of whether we have a disability or where we come from in the Union. And yet, Eurofound’s recent research has highlighted that issues such as the polarisation and the segmentation of European labour markets persist.

Our latest report, The gender employment gap: Challenges and solutions, shows that the gap between male and female participation in the labour market remains wide. Despite a notable increase in women’s labour market participation in recent years, the female employment rate is still more than 10 percentage points lower. This is in addition to research showing that women are more likely to work part-time in Europe, and that a clear gender segregation of occupations and workplaces persists, as shown in the figures of the European Working Conditions Survey.

There are clear ethical and political implications resulting from this inequity. There is also a significant financial cost to Europe. The gender employment gap is equivalent to an overall (gross) loss to the economy estimated at around €370 billion, or 2.8% of the EU’s annual GDP, comprising the forgone earnings and missed welfare contributions of non-working women to society, as well as the public finance cost, comprising individual welfare transfers and social benefits. This figure does not include the contribution in caring and other domestic activities made by women outside the labour market, which has not been properly estimated at EU level. Arguably, the cost of a lower participation of women would be, at least partially, offset with the savings for (mostly care) services not provided by governments. At the end of the day, this reflects the broader question about the model we want for society – one based on the division of tasks based on gender, or one based on equal opportunities and equal participation aligned with the EU values. 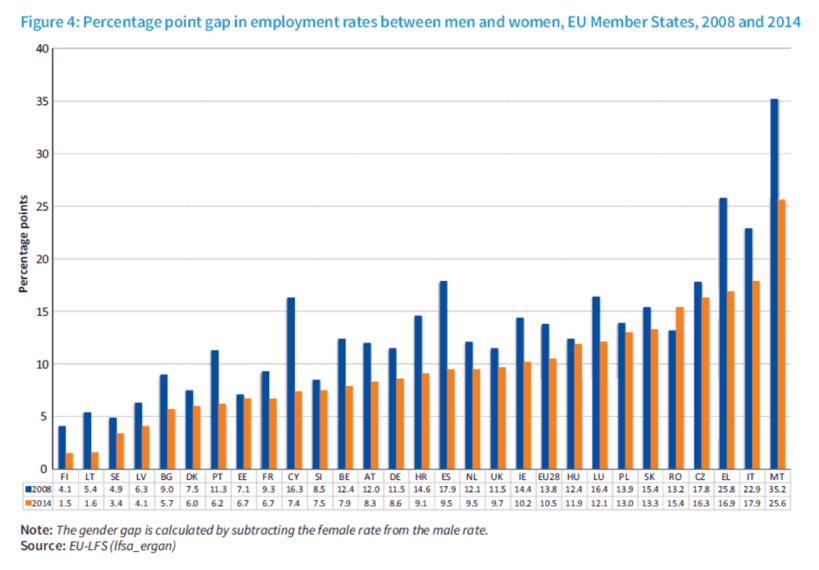 Examining the recent evolution of the labour market, the good news is that there has been a convergence between female and male employment rates since 2008. However, this has been largely driven by a relative worsening of the male employment rate and the decline of previously male-dominated industries such as construction. The fall in employment in these industries, partly influenced by the process of digitalisation and automation, has lessened the gap from a statistical point of view. In any case, examining scenarios for the coming years, it is clear that the EU will not meet its target on female participation. If progress were to continue at this rate it could take up to 30 years in many Member States to achieve EU targets.

Empowerment can be driven through a myriad of social and economic policies, as well as business practices that can impact directly (and positively) on the gender employment gap. The report summarises a number of these, including the availability and affordability of childcare, the accessibility of, and social practices relating to, parental and adult care leave, as well as the provision of flexible working arrangements. In particular, in many Member States, an integrated approach to family policies could drive up the labour market participation rate of women by 14% during the next 30 years.

The findings show that Member States that have been successful in reducing the gender employment gap in Europe have implemented several of these policies to reduce barriers to employment. At the same time, they have emphasised the importance of employers recognising employees’ need to reconcile care responsibilities with work more generally – an approach from which the workforce as a whole, women and men, as well as employers, can benefit.

The gender employment gap is hardly a new issue; gender equality was a significant challenge when it was established as a priority with the Directive on equal treatment between men and women in employment 40 years ago, and it has been always part of the EU strategy. But this does not make it any less pressing, to be put on the back-burner until after Brexit or until the migrant crisis has been dealt with. Nor is the gender employment gap a ‘women’s issue’ or an issue for one European Parliament or national parliament committee in isolation. It is an issue of importance for all stakeholders, from SMEs to the European Commission, because, as President Juncker said: ‘solidarity is the glue that keeps our Union together.’