Prior to the release of growth statistics in the middle of August there was widespread expectation that a sustained eurozone recovery would at last be verified. However, the numbers showed a result familiar to long suffering commuters all over Europe – “we regret that this service is delayed”. This is far from the first such disappointment and prospects for improvement in the near future are not robust.

A glance at the performance of the four largest eurozone economies, the French, German, Italian and Spanish, suggests that a recovery may be in process. Closer inspection casts this interpretation of the statistics into doubt. The German economy shows the strongest recovery, which hardly qualifies for that adjective.

As for the French economy, German GDP returned to its pre-crisis peak in the first quarter of 2011. Four years and a quarter later (2015 Q2) it increased by five percentage points. This annualized growth rate of 1.1% resembles “stagnation” more than recovery. And this performance is the best for the four. The French economy returned to its peak as quickly as did the German, though from a less severe contraction. In the subsequent four years annualized growth weighs in at a microscopic 0.5%.

Much is written about the alleged recovery of the Spanish economy, and “alleged” is the operative word. The most favorable assessment of Spanish economic performance comes by comparing the lowest point (2011 Q2) to the latest statistic (2015 Q2), which yields a respectable annualized rate of 2.1%. Less flattering is to point out that by the latest statistics Spanish GDP remains 4% below its peak, which is the same as four years ago (2011 Q1).

In the case of Italy not even Candide would find recovery there. In the second quarter of this year Italian GDP remained stagnant at 9.1% below its peak, and a meager 0.5% above its trough three quarters before. The simple reality is that for at least the last four years the major countries of the eurozone have been stagnant.

By comparison the long delayed recovery of the UK economy seems impressive, now like the German economy 5% above its peak level in 2008. As for Germany, this modest increase should impress no one, implying since mid-2010 (when the Conservative-dominated coalition came to government) sluggish annualized growth of 1.8%. The US achievement of a 9% increase over its peak in 2008 claims first place against very weak competition. 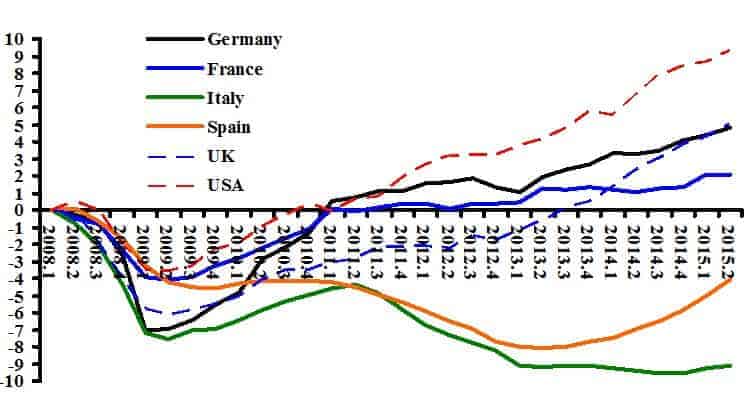 Prospects For The Near Future

Might this eurozone under-achievement change to robust recovery in the foreseeable future? I find little to inspire optimism. With its inflexible commitment to fiscal austerity the German government has ruled out EU-level policies that would make regional demand the driver of expansion. Member governments find themselves constrained in doing so by direct pressure, their own ideologies and/or the EU fiscal rules (for example, the “Six Pack“).

In the absence of a fiscal stimulus, growth generating increases in demand must come from domestic consumption, in-country private investment or an increase in net exports. Autonomous increases in consumer demand are unlikely, or if this were to occur it would imply a rise in household indebtedness. Numerous studies suggest that increases in household debt relative to income can itself be a source of future financial instability.

Prospects are quite bleak for an increase in EU exports sufficient to stimulate recovery and make it sustainable. The two major sources of increased export demand would be the United States and so-called emerging market countries, with China dominant within the latter group. The United States is an unlikely candidate, with import demand growing at barely 3% per year since 2010 (Economic Report of the President 2015, Table B-5).

Even less likely are the “emergers”. The country with the largest import demand in South America, Brazil, is in the throes of an economic slowdown if not outright recession, severely aggravated by political instability. While the Indian economy continues to boom, its contribution the global economy is far less than the Chinese economy, from where alarming news seems to seems to come daily. From a driver of global growth, the Chinese economy is now predicted by a major corporate money fund to be a threat to “tip the world into recession”.

The same forces that undermine optimism for eurozone growth apply to Britain and the United States. With UK exports unlikely to increase substantially with the eurozone stagnating and the Chinese grow rate declining. Private investment has recovered to its pre-crisis level, but one of the principle drivers of new investment in manufacturing, the level of capacity utilization, has remained unchanged for the last three years.

These potential problems prompted the Bank of England to lower its growth forecasts. The usually reliable Conference Board reports a downgrade of US growth forecasts to just over 2% for 2016.

The strategy for eurozone and EU-recovery coming out of Berlin and EU institutions (especially the ECB) is very low inflation, wage restraint and “structural reforms” (reductions in labor rights and bargaining) to increase export competitiveness. When global trade growth is sluggish this strategy for export competitiveness becomes tantamount to mercantilism, because substantial increases in exports by one country or region require declines elsewhere. This represents the road to currency wars, trade restrictions and conflict as governments seek to foster their parochial economic interests.

There is another route to sustained recovery. Keynes famously proposed a set of rules for the international economy that would require governments of countries with current account surpluses to adjust rather than the deficit countries adjusting. Within Europe this would change fundamentally the growth strategy, requiring a substantial fiscal expansion by the German government.

We find no major country in the world better placed to embark on an active fiscal policy. The two standard constraints on fiscal expansion, the budget balance and the trade account, are not binding for Germany. In 2014 the trade surplus hit a record high of €215 billion and the public sector recorded an overall fiscal surplus.

In a world of rational economic policies the European Union would lead global recovery thanks to a bold macro policy by a farsighted German government. This would signal the assertion of Europe as a cooperative global economic power and win approval throughout the world economy, not least from the United States.

Needless to say, this will not happen. Instead, eurozone politicians under German leadership will continue their preoccupation with parochial concerns based on non-binding constraints and “problems” that do not require solving. Delays to recovery of the eurozone will continue. Unlike for delayed and cancelled trains and planes the passengers on the euro stopping service will not receive compensation.