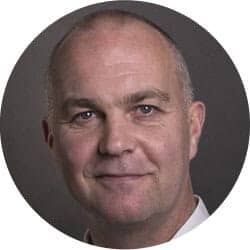 The EU has finally recovered all the net employment losses sustained since the global financial crisis. It has been a long and painful process. But there is at last growing evidence of positive momentum in EU labour markets, if not quite ‘animal spirits’. Many of those member states most affected by the global downturn have recorded significant employment growth in the last three years – including Spain (+9%), Ireland (+8%) and Greece (+5%).

While overall employment numbers are back to where they were, and continuing to increase, the structure of employment in the EU has changed in a number of ways. There are some trends that are long-term, pervasive and well-documented – for example, the increasing services share of employment, occupational upgrading and the growth of female employment. Some, however, are less well-known. The latest European Jobs Monitor report draws attention to three emerging and less remarked labour market developments.

First of all, in contrast to the pre-crisis employment expansion or even the crisis years (2008-13), employment growth since 2013 has been only modestly skewed towards well-paid jobs. Recent growth has been increasingly robust in low-paid and mid-paid jobs, resulting in a consumption-led recovery where employment in sectors such as food/beverages, accommodation and personal services in particular have benefited from increased demand. Of course, jobs in these sectors are generally less well-paid and have limited potential to contribute to overall productivity increases. Their growth may be one part of the explanation for the “productivity paradox” – declining levels of productivity growth and stagnant pay despite the array of technological advances such as driverless transport, automated factories, telemedicine, online education (MOOCs,) etc. – with which we are all increasingly familiar. 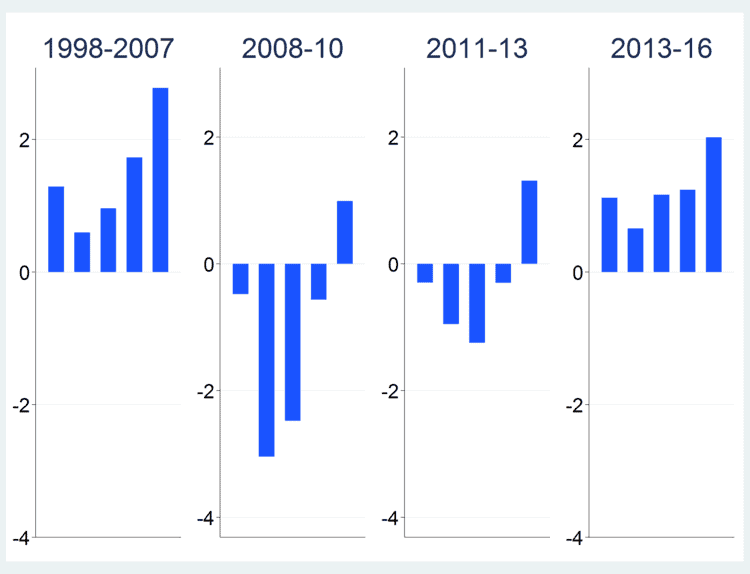 Second, while services account for the lion’s share of new jobs, there has also been a notable rebound in EU manufacturing employment. Over 1.5 million net new jobs have been created in industry since 2013 and the rate of employment increase has been only marginally lower than that for services (1.4 percent per annum versus 1.6 percent, EU). Sectors such as auto, machinery and equipment manufacture in particular have benefitted. 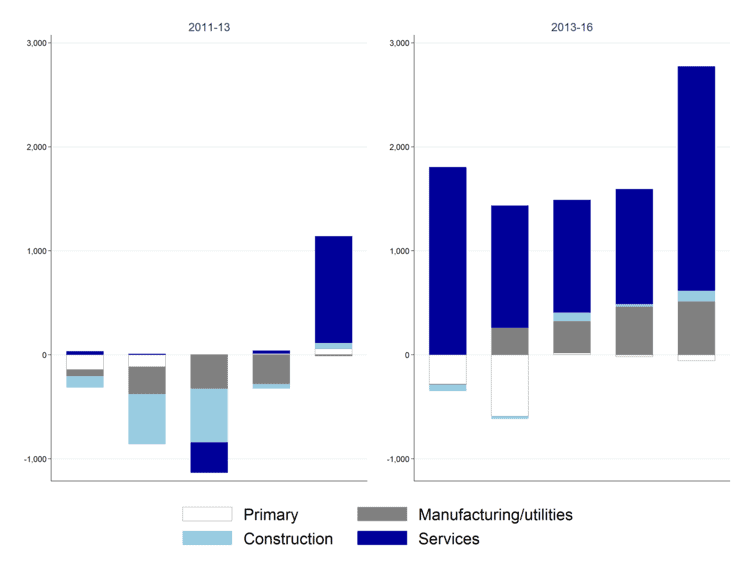 Two further dimensions of this increase in manufacturing employment are worth signalling:

And, of course, the recent increases need to be seen in the context of a long-run decline in manufacturing’s share of employment – down from 31 percent as recently as 1995 (EU15) to just over 14 percent in 2016, as well as the sharp contraction experienced during 2008-13 when over 5m jobs were lost in EU manufacturing. Nonetheless, as recent Eurostat data on the auto industry demonstrates, European manufacturing is globally competitive, with significant recent employment dividends.

Third, there has been some closing of the gender employment gap, both quantitatively and qualitatively. Women have accounted for greater employment growth than men since 2011 (4.1m versus 2.7m). More surprisingly perhaps, in a departure from established patterns, men are accounting for a much larger share of part-time employment growth. In fact, since 2011, new female jobs are more likely to have been full-time, while the majority of net new male employment has been in part-time employment, generally lower-paid and often involuntary. Male part-timers are much more likely than female part-timers, for example, to indicate that they are working part-time only because they cannot find an equivalent full-time job.

For men, part-time employment growth has been notable in many jobs which to date have been mainly female-employing such as retail sales assistants and personal service workers in the food/beverages sector. One potential explanation is that male workers who lost their jobs in the manufacturing and construction sectors during the crisis have subsequently taken up lower-paying service jobs, including jobs in the ‘gig’ economy. At the other end of the wage distribution, there have been increasing numbers of part-time professionals in the health and education sectors and, in line with the overall gender share of employment in these sectors, these have been primarily female jobs. 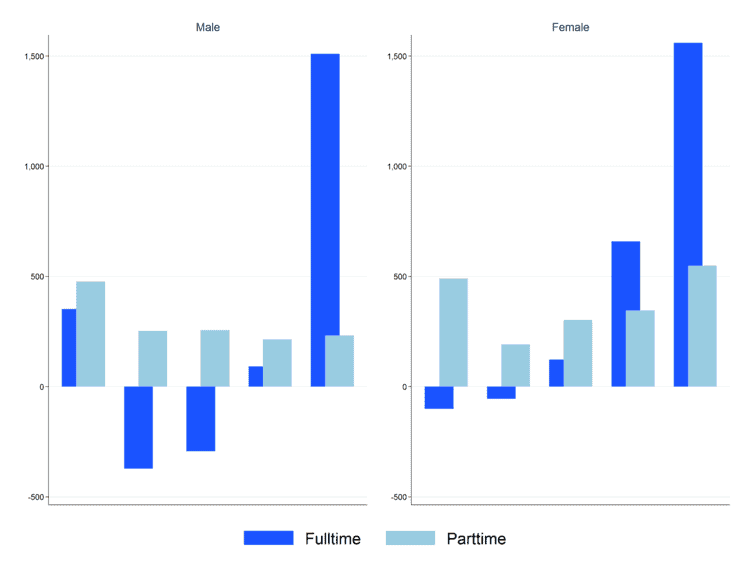 In summary, the jobs recovery in Europe has been marked by the return of positive employment growth in the middle and at the bottom of the wage distribution – even if over a longer timeframe higher paid jobs continue to grow faster than others. A bounce in (generally good quality) manufacturing employment has contributed to this positive dynamic. Meanwhile, part-time employment, strongly associated with wage penalties and other job quality deficits, appears to be ‘normalising’, at least for some professional women, while offering some possibility of last-resort labour market attachment for a growing number of men.

This blog post is based on research carried out by the author jointly with Enrique Fernandez-Macias and other researchers for Eurofound in the European Jobs Monitor [EJM] project. The EJM tracks structural change in European labour markets – in terms of employment shifts by occupation and sector – and also provides a qualitative assessment of these shifts using different proxies of job quality, notably average hourly wage. The 2017 EJM report can be downloaded here.

John Hurley is a senior research manager in the employment unit at Eurofound, where he has authored or co-authored more than 20 reports. His main research interests are in comparative labour-market analysis, restructuring and the changing world of work.