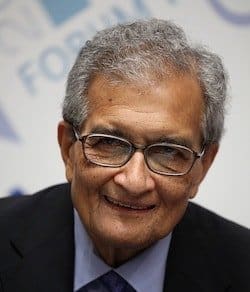 Thomas Piketty and other academics have documented the growth in income and wealth inequality in many countries around the world, however the repercussions of widening inequality are perhaps less well understood. What are your thoughts on the consequences of inequality?

These are good questions. Inequality has to be viewed not only in terms of its consequences, but also as something that we have reason to disapprove of in its own right. So you have to go beyond the consequences. There’s an increase in inequality in many countries in the world and we should be worried about that.

You’ve mentioned Piketty’s work, and I know that there’s a debate over this subject, with Chris Giles at the Financial Times raising a number of questions about it. These are eminently discussable questions, but in any study of this kind you have to use diverse sources of data, and it is inescapable that you have to establish certain linkages on which it is possible to have debates. Despite the elements of arbitrariness in the linkages, are the conclusions drawn from them fairly robust? I believe they are. I think that Piketty’s conclusions mostly stand. There are one or two exceptions, including the fact that these conclusions probably apply a little less to the United Kingdom than to many of the other countries which he discusses – they certainly apply to the United States very well. So I think that the summary story that inequality has been growing quite sharply in recent decades, and in recent years in particular, is true. We therefore have reason to worry as to whether this is acceptable socially, and also what the consequences are.

Now coming to the consequences, these very much depend on what kind of inequality we’re discussing. If you compare for example China with India, the inequality level judged in terms of income distribution is no less in China than in India – according to some measures it is even higher in China. But the fact that despite the inequality in China there is close to 100 per cent literacy and nearly 100 per cent health coverage – at least of some kind — in a way that doesn’t exist in India – means that inequality has had a more severe effect in India than it has in China. On the other hand, if you were to leave economics to one side and look at the distribution of political power, then of course there you could identify some advantages on the Indian side: namely that because of democracy and multi-party politics, people have more opportunity to express their views and to choose among many different parties than they have in China. So you really have to look at the nature of the inequality we’re examining to be able to assess what its consequences should be.

You have criticised Narendra Modi, the recently elected Indian Prime Minister, and his party for their Hindu-nationalist outlook. Did Modi’s decision to quickly invite the President of Pakistan, Nawaz Sharif, to his inauguration surprise you?

Was it a good move? Yes indeed, it was a very good move. Second, did it surprise me? No, it didn’t surprise me because it’s an intelligent move of a kind that Modi should be able to think of. Even though I’m critical of his tendency to favour the majority Hindu community compared with minorities, and I am critical of the fact that, at least in the past, he has tended to neglect – judging by the record of Gujarat – education and healthcare and has concentrated only on physical infrastructure, I’ve never thought that Mr Modi isn’t a very intelligent man and capable of being pragmatic.

The third point concerns a more difficult issue and is, in some sense, a more profound point to consider. When India was partitioned, it was the Congress Party (and the Indian secularists) who claimed that there was no difference between Hindus and Muslims – that there wasn’t going to be a Hindu country and a Muslim country. The claim of the great leader of the Muslim League, Muhammad Ali Jinnah, was to say that there would be a Muslim Pakistan and there should be a Hindu India. So if India moves to become more of a Hindu India now, then that would be something which is quite acceptable to the Pakistan tradition of ‘we are Muslim Pakistan, you are Hindu India’. Modi fits into that pattern much more easily.

So in some ways, at that level of the Indo-Pakistan relationship, there isn’t any great problem in thinking of India as a Hindu India coming to terms with a Muslim Pakistan on an equitable basis. In the past, of course, the Indian position has always been that they are not on a symmetric footing: that India is a secular country in a way that Pakistan has not tried to be. In Pakistan a dominant self-perception is that of being a Muslim nation in a way that India’s perception is not that of being a Hindu nation. This is something that even Modi cannot change, and if he’s pragmatic (and he can be expected to be that), he wouldn’t try to change that.

Regarding the Indian relationship with Pakistan, I don’t expect a great tension there. However, India becoming more militaristically inclined may be a problem because that is certainly more of a BJP line. After all, it was they who blasted the nuclear bomb in 1998 even though India had already done testing before in the mid-70s. There was no particular need for India to do new detonations in 1998, but it gave Pakistan a good excuse to have their own – first time – blasts (not just on paper) citing India’s new round of actual testing.

I hope this time, the BJP will be more careful with the relationship between India and Pakistan. The mere fact of a new view of a “Hindu India” meeting Muslim Pakistan is not going to be a problem in itself in terms of Indo-Pakistani relations.

The real issue concerns what happens inside India. It is not easy to make India – with its multi-religious mix, its secular constitution – into just “a Hindu country.” There is a Supreme Court, a secular constitution, a media, a general public. Even though Modi and the BJP were very successful at the 2014 Indian general election, achieving victory with over 50 per cent of the seats, they only received 31 per cent of the vote. The majority of Indians are not clamouring to live in a majoritarian Hindu country. That’s a very serious diagnosis to bear in mind.

Amartya Sen is Thomas W. Lamont University Professor, and Professor of Economics and Philosophy, at Harvard University. He was awarded the Nobel Prize in Economics in 1998 for his contributions to the study of fundamental problems in welfare economics. His most recent book is An Uncertain Glory: India and Its Contradictions, co-authored with Jean Dreze. Professor Sen is an Honorary Fellow of the London School of Economics and Political Science.