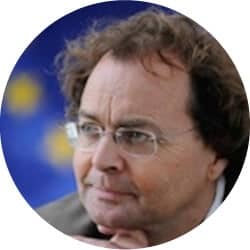 Now that the CSU and CDU have come up with a formula to limit the number of eligible refugees, Jamaica negotiations between CDU/CSU, Free Democrats and the Green Party have started in earnest. This is bad news for those who want to make progress in completing the institutional architecture of the eurozone and make the common currency more crisis-resistant. Jamaica will breathe new dynamics into the reform debate of the eurozone. However, it will be largely negative dynamics.

The source of this disturbance is the Free Democratic Party (FDP) which is prepared to follow a radicalized Schäuble strategy.  The FDP manifesto is clear: in order to avoid permanent wrong incentives, ‘we want to continuously reduce the lending capacity of the ESM (European Stability Mechanism) until it comes to a long—term end‘. Of course, this statement is not meant as a serious economic policy statement that aims to improve the eurozone’s institutional setup. First, , it is an expression of an ideological fixation which plays with a deep-seated narrative in German politics. In this sense such a policy proposal is not unique to the FDP but can be found in many segments of German political opinion: it is the German taxpayer who paid for the fiscal profligacy of the eurozone’s southern periphery, and this must come to an end. And it is the Free Democrats who see it as their task to do just that.

To avoid any future bailouts, the FDP goes one step further and demands a European liquidation law that deals with insolvent countries and opens up an exit path out of the Eurozone without having to leave the EU. The target culprit is Greece but then it can be any eurozone member that runs into trouble and hence is shown the door. Back to a no-bail-out world is the motto. Of course, this is very much the concept favored for quite a while by Schäuble but then put on the backburner because he could neither get the support of the SPD nor of Chancellor Angela Merkel. The FDP is resurrecting his plan (without him).

Of course, Schäuble, the politic pro that he is, did not lose any time in securing backing for his tough line by leaking the ‘non-paper’ ‚Paving the Way to a Stability Union’ of his experts in the Finance Ministry which reflects the FDP program 1:1. Chances are that this may soon become official German policy. When it comes to the eurozone, the difference with the proposals of the AfD is extremely slight. And so is the difference to the current policy stance of CDU/CSU, both of which are very much in favor of stamping German interests on the eurozone’s architecture. Programmatically, the Greens have different views on eurozone reforms but for them getting into power may override all else. In the past, the Green Party did not try to differ from the mainstream pack when it came to crisis management in the eurozone. Seen in this light, the FDP is only spelling out what a majority of parliamentarians thinks and what three of the four Jamaica parties favor.

From an economic point of view all this sounds crazy and suicidal. First, the EMS was a success in its own right. Providing liquidity credits in combination with harsh austerity conditions was the project, and today the economies that sought refuge under the umbrella are back on private sector financial markets. To be clear: The EMS was never intended to enact rescues in a socially balanced and economic progressive way so the sheer fact that economies could regain access to the private financial sector is sufficient to declare success on its own terms.  Second, the overwhelming majority of international economists agree that the eurozone is an incomplete monetary union, and that it is this incompleteness that is responsible for the way the crises played out. To demand making the eurozone even more incomplete is nothing else than a cry for the next crisis, with reduced crisis-management capacity.

Rather then preserve the eurozone’s incomplete institutional architecture, or make it even more incomplete, what is needed is to firmly strengthen that institutional set up. The Sorbonne speech of President Emmanuel Macron laid out principles and policies for such a project.  And yet, with the outcome of the ferderal elections, any (already slim) chance for a common Franco-German reform project is gone. It seems that the eurozone has no forward-looking supporter: The only potential candidate, the Green Party, will have to fight hard to defend its core policy items, mainly climate and immigration. It would be a big surprise if it risked its government participation by fighting for a more complete eurozone.

The question, though, is why the block of CDU/CSU/FDP takes such a harsh stance? The best answer is given by Schäuble in his long interview with the Financial Times where he again and again stated that the rules-oriented austerity policy was a huge success. And indeed, this view is deeply entrenched in German public discourse, and even more so in Germany’s economic branch. In the US, the recession lasted about a year and a half – from December 2007 to June 2009.  By way of contrast, the eurozone recession started technically in January 2008, ending April 2009 only to turn into a long recession from Q3 2011 until Q3 2013. The eurozone thereby on average lost substantial amounts of income in comparison to the US, largely because of different fiscal policy stances. Moreover, without the intervention of Draghi and the policy change of the ECB (QE), the outcome would have even been worse. The attempt to declare the crisis strategy of Schäuble & Co a success story has no empirical base whatever German public discourse asserts.

The good thing is that Germany alone can’t change the euro area’s institutional setup. The bad thing is that the EMS is not part of the treaty but has been set up outside the EU framework and thus change can come quickly. Moreover, a not inconsiderable block of the ‚German austerity camp‘ inside the eurozone has shifted national interests to the forefront. Austria will follow swift what we can already see in Finland, Belgium, the Netherlands and, partially, in Italy. Rather than securing the common good by offering mutual assistance, relevant political groupings of those countries are more interested in minimizing national responsibilities and contributions. Voters seem to appreciate such policies. Economic nationalism comes in various flavors, and in the eurozone it is the rejection of common responsibilities. As a consequence, an adequate reform of the eurozone will have to wait, and the next crisis will become a next huge challenge.