In 1914, as he was leading his men at the Battle of the Marne General Foch, the best of all the French fighting generals told his chiefs in Paris: ‘My centre is giving way. My right is retreating. The situation is excellent. I am attacking.’

And indeed in one of the greatest manoeuvres ever seen on the European battlefield, Foch’s hastily reorganized armies stopped the overwhelming German advance on Paris and turned to dust Berlin’s hopes for a swift crushing capitulation of France such as was obtained in 1870 or later in1940.

100 years later another gritty stubborn French leader has decided that his country needs the shock of telling some harsh truths if France is again to rise to the challenge of staunching the defeatism about inevitable decline that pervades most French public debate.

In a remarkable speech, using language never heard before from a socialist in France, the prime minister, Manuel Valls gave a simple message to his fellow citizens and to the governing elites of Paris : ‘Reform or die.’ To be sure these are only words but in France la parole counts and Valls has now burnt all his bridges back to the safety blanket of traditional French statism.

French socialists like to think their ideology of government is located in a mushy Marxism. It isn’t. It is statism pure and simple. General de Gaulle nationalized more banks and industries in 1945 than the Labour government did in Britain. De Gaulle did not do so to implement leftist theory. It was l’état, l’état and always more state that lay at the heart of his profoundly conservative ideology. The first socialist President of France, Francois Mitterrand, donned the statist mantle of General de Gaulle and pretended it was French socialism.

Now a new generation French leader has dared to say that the statist Gaullist-Mitterrand tradition won’t work in the 21st century. Worse, unless French citizens accept they need to change no amount of statism will save France. Choosing an obscure south west French assembly of socialists, Prime Minister Valls told them that permanent reformism was now the only way forward for France.

‘The left can die’ he had already said as he urged his deputies in the National Assembly to accept painful reforms. Suggesting a more Nordic or German approach he denounced a France ‘trapped in partisan politics’ in contrast to the historic compromises that have allowed northern European social democrats to mix economic growth with social justice measures.

He told his leftist critics in his own party that reforms ‘can throw people off balance, upset old habits, and get rid of what has been taken for granted.’  The left he said has to ‘throw away the recipe book from the past and re-invent itself. Our political culture likes the idea of the all-or-nothing “revolution”. But we need reforms, real reforms based on dialogue,’ Valls declared. He told the left to back business ‘Supporting entrepeneurs (yes there is a French word for them), supporting production is part of what being left means.’ 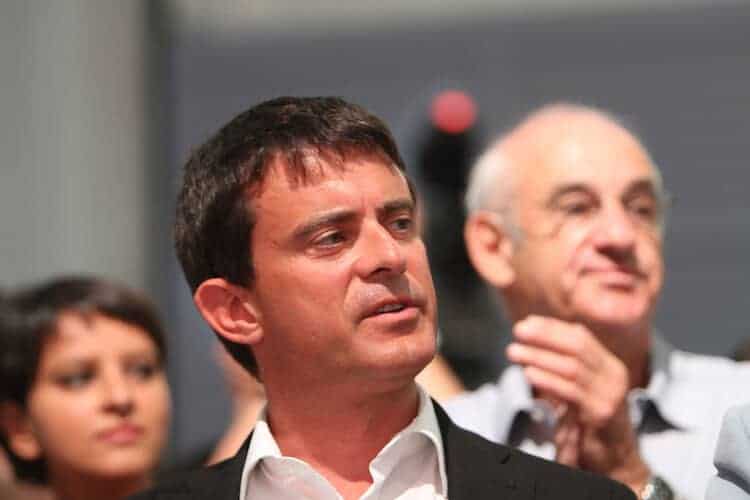 Valls like Foch is taking a risk as too many of the current French metrics look bad. At times France get a unjustified bad press. Right now Britain is the EU’s economic poster boy yet Britain runs a government deficit of 5.8 per cent, twice as high as the Eurozone’s official target of 3 per cent and much higher than France’s 4.3 per cent.

Valls is linking up with Mario Renzi to say that the Berlin imposed austerity ideology does not make sense. Germany’s top 500 companies report falling order books as the rest of Europe cannot buy what Germans make. West of the Rhine and south of the Alps the Germans, via faithfull messenger boys in Brussels, reduce public and private spending, borrowing and investment.

Britain’s Tory government is about the Keynsian show in Europe. Since Prime Minister Cameron came to power in 2010 government debt increased from 78.4 per cent of GDP to 90.6 per cent of GDP.  The Bank of England prints money unleashing a giant housing bubble but London reckons – rightly –  it is better to have economic movement and energy than Berlin’s orthodox stasis.

Valls like Italy’s new political star, Matteo Renzi, another reformist social democrat, is cutting taxes on the low paid and holding down public spending to allow private businesses especially in the digital econmy where France is an EU leader to grow.

It is all in stark contrast to the last president of France, Nicolas Sarkozy. Although he claimed to be an ambassador of transatlantic neo-liberal ideas during his five years in office public spending increased by 15 per cent and government debt went from 64 to 85 per cent of GDP. Sarkozy binned sensible reforms proposed by Jacques Attali and other French modernisers. He instituted 20 new taxes and increased the level of public employees. As Gaspard Koenig of the Paris think-tank Génération Libre noted recently in the Financial Times, ‘by the end Sarkozy was calling for the reintroduction of French protectionism and national border controls.’ Sarkozy thus was a failed statist in the tradition of de Gaulle and Mitterrand but without their flair or vision on global issues or European construction.

There is no guarantee that Valls can win. He faces Marine Le Pen and arguably the most stupid left in Europe since the old French communist party, so reactionary it used to embarrass even the Kremlin, faded away. And like Ferdinand Foch he can only offer a long slogging war as reformism never delivers instant results.

There are many French would-be reformists who are not frightened to call themselves social democrats or even liberal socialists. Bu they have never had one of their own at the heart, indeed the top of French power.  Valls has nailed his colours to the idea of reformism. If he goes down, so does France.

Denis MacShane was a Labour MP (1994-2012) and served as UK minister of Europe. He writes regularly on European politics and Brexit.