The 1992 Treaty of Maastricht that lay the basis for the euro committed signing governments to several economic targets. Subsequent treaties and protocols made these targets stricter. The targets suffer from serious technical mis-specification. The problems of the criteria have their basis in a fundamental flaw that must be recognized and corrected to prevent further economic degeneration of the euro zone and the wider EU.

While allegedly having universal application across countries and over time, the targets refer to the special case of a growing economy at full employment (full capacity). The treatment of this special case as the general case comes from ideology, the narrow neoliberal version of neoclassical economics.

The Maastricht rules were inspired by belief that the private economy self-adjusts to full potential. Policy mistakes by governments prevent that outcome. It is to prevent mismanagement by governments that the Maastricht rules specify maximum and minimum targets for the public budget balance, inflation and public debt. For example, governments are instructed to not have public sector deficits of more than three percent of GDP. This is an asymmetrical rule – no upper time is specified, with the obvious implication that a surplus can never be too large.

By their nature asymmetric economic rules are contrary to rational policy. They come from neoliberal ideology: 1) government policies and their outcomes explain poor performance of the private sector; 2) rules and regulations should focus on constraining not facilitating public policy; and 3) some public policy outcomes are per se bad, requiring no justification for their prohibition.

Asymmetry derivative from ideology is basic problem with the Maastricht rules. They deny the need for counter-cyclical government interventions. For that reason alone they should be fundamentally revised. In addition, if a set of policy rules is required, at least one important thing is missing, a guideline for the balance on the external account of member states.

I have argued that that trade imbalances in the EU promoted the so-called debt crisis of the early 2010’s. Even those who disagree must concede that these imbalances have been seriously problematical. In 2010 the German current account surplus was 5.5% of GDP, now up to 8.3%.  Persistent current account surpluses of that magnitude are de facto mercantilism. As George Irvin suggested the EU needs sanctions for countries exceeding a surplus guideline, as Keynes recommended at Bretton Woods.

The existing rules suffer from serious deficiencies. Perhaps the most notorious of the rules is the infamous 3% for the public sector deficit, stated in the Treaty as follows (full text here):

The ratio of the annual government deficit to gross domestic product (GDP) must not exceed 3% at the end of the preceding fiscal year. If not, it is at least required to reach a level close to 3%. Only exceptional and temporary excesses would be granted for exceptional cases.

The Treaty defines “annual government deficit” as total revenue minus total expenditure. If the purpose of the rule is to ensure “sound” fiscal policy, the policy literature on public finance shows that this is the wrong measure. In its guidelines for sound fiscal policy the IMF states that the appropriate measure is the primary deficit, overall deficit minus interest on the public debt.

Citing the IMF supports what is obvious. The management of the public budget involves adjusting expenditures and revenues. Interest payments consist of legal obligations; reducing them implies debt default. The Maastricht Treaty has specified a technically wrong measure of fiscal policy that includes a component that cannot be adjusted. If the primary deficit were the guideline, the recent objections by the governments of France, Italy and Spain would be unnecessary.

The inflation guideline is also technically flawed. The European Central Bank aims for a target rate of 2% of a measure named the Harmonized Index of Consumer Prices. The measure is seriously flawed because it includes prices of internationally traded commodities over which the ECB has no significant influence.

More serious is that 2% is a technically absurd target. Twenty years ago the Boskin Commission estimated that new products and quality change account for between 0.8 and 1.6 percentage points in the US cost of living index, taking 1.1 as “best estimate”. In a world of globalized markets the EU statistic is unlikely to be very different. Therefore, an inflation target of 2% de facto aims for an effective rate of less than 1%.

The benefits of a capitalist economy come from its dynamism, the continuous reallocation of resources in response to technical change and shifts in consumer preferences. This allocation occurs through price adjustment. For example, workers move between sectors in response to wage changes. Some wage inflation and therefore price inflation are inherent in the efficient operation of a market economy. The 2% inflation target is in practice deflationary, achieved by suppressing the price adjustments essential to economic growth.

Finally, there is the most obviously flawed Maastricht rule, that the public debt should not exceed 60% of GDP. A specific ratio is irrational. The concern should be sustainability, not absolute size. Rather than setting an arbitrary maximum, the designers of the Maastricht Treaty should have read the IMF manual on public debt, which provides a simply calculated formula to measure sustainability.

As foolish as the 60% rule is, the number has more credibility than the debt measure to which it refers. As hard as it may be to believe, the measure is specified by Treaty as the gross debt, not the net debt. The latter, used by the UK Treasury and in many other countries, subtracts public sector liquid assets, such as foreign exchange holdings by the central bank.

The chart below shows the substantial difference between the gross and net debt. At the end of 2015 fifteen of 21 EU countries were above the Maastricht gross debt rule. Using the net debt, actual liabilities, that number falls to nine, and four countries had negative debt. The most absurd cases are Finland and Slovenia, over the mark for the Maastricht calculation, but on the correct measure at minus 50% (Finland) and plus 21% (Slovenia). Both countries applied growth-depressing austerity programmes, in part justified as necessary for a debt problem that never existed. 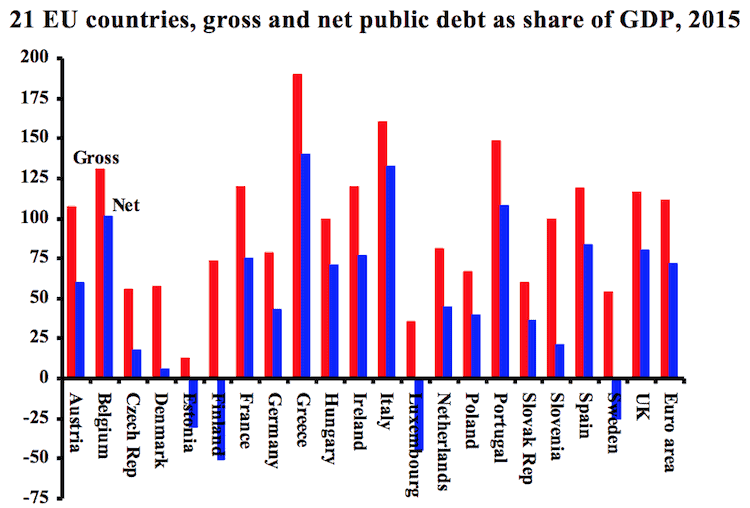 If the economic policy coming out of Brussels and Berlin had pretension to economic justification the Maastricht rules and the so-called Six Pack would collapse under the weight of ridicule. To the contrary, they remain central to the dysfunctional policies that hold most EU countries and especially the euro zone in continual stagnation.

In this period of aggressive attacks on the European Union the progressive defence of the continental system by necessity stresses the need for reform of governance and economic policy. Central to that reform is revision of the Maastricht Treaty and supporting treaties and protocols.

Progressives must embark on the tedious and time-consuming task of specifying in detail the necessary changes. Staggering on with economic guidelines designed for continuous full employment will take us from one disaster to another, with the disintegration of the Union at the end.