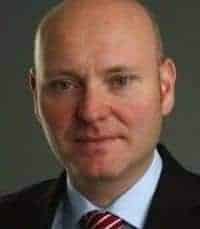 In the debate on the Greek crisis, no cliché was too tawdry to be used and no claim too stupid or false to be made by large sections of the media and politics. Time and again, we read or heard how the “lazy Greeks” or “bankrupt Greeks” really ought to start cutting spending now.

The fact that the Greek government has had to implement a brutal austerity policy over the years since 2010, with spending cuts and income increases exceeding 20% of GDP (depending on the type of measurement), was deliberately overlooked. It should be immediately clear that austerity is directly linked to the disastrous economic crisis in Greece just as it is directly linked to the crisis in the Euro area as a whole (see two recent IMK publications).

IMF chief economist Olivier Blanchard conceded some time ago that fiscal multipliers, i.e. the negative effects of austerity, had been greatly underestimated. In the meantime, the prevailing view among international experts has become that the restrictive fiscal policy in crisis-hit European states – Greece in particular – has greatly contributed to the severity and duration of the recession there.

This consensus was recently contradicted by no less a person than Edmund S. Phelps, the US winner of the Nobel Prize in Economics, concerning Greece of all countries. In an article for Project Syndicate entitled “What Greece Needs to Prosper” published on 6 August, Phelps contradicts the “demand school” (Phelps’s term) that claims that austerity policy in Greece led to a demand deficiency and thus an acute depression. His central argument is empirical. To quote:

But this claim misreads history and exaggerates the power of government spending. Much of the decline in employment in Greece occurred prior to the sharp cuts in spending between 2012 and 2014 – owing, no doubt, to sinking confidence in the government. Greek government spending per quarter climbed to a plateau of around €13.5 billion ($14.8 billion) in 2009-2012, before falling to roughly €9.6 billion in 2014-2015. Yet the number of job holders reached its high of 4.5 million in 2006-2009, and had fallen to 3.6 million by 2012.

If Phelps is right in his assertion, the broadly accepted explanation for the Greek crisis (that it was caused by restrictive economic policy) would be severely undermined. How could austerity have caused a crisis that (almost) reached its peak more than three years before the policy was adopted?

This needs clarification; a look at the data works wonders (as it so often does). First of all, Figure 1 shows the development of employment, specifically the number of persons in civilian employment, according to the EU Commission’s Ameco database (as of May 2015), on an annualised average. The trend asserted by Phelps can be reproduced approximately: after a rise in the number of job holders to a little over 4.5m in 2008, the figure declined slightly in 2009 and then fell dramatically to below 3.8m by 2012.

Figure 1 also attempts to reconstruct Phelps’s claims regarding “government spending” as specified in the article. It rose to €13.5bn by 2010 and then levelled off at this plateau until 2012. From 2013 onwards, it began to plummet, until it reached just €9.6bn in the first quarter of 2015, as stated by Phelps (in a further paragraph). (See below for more information on the trend’s reconstruction.) If this corresponds to the facts, then the spending cuts would indeed have been enforced too late to serve as an explanation for the drop in employment which began in 2009. 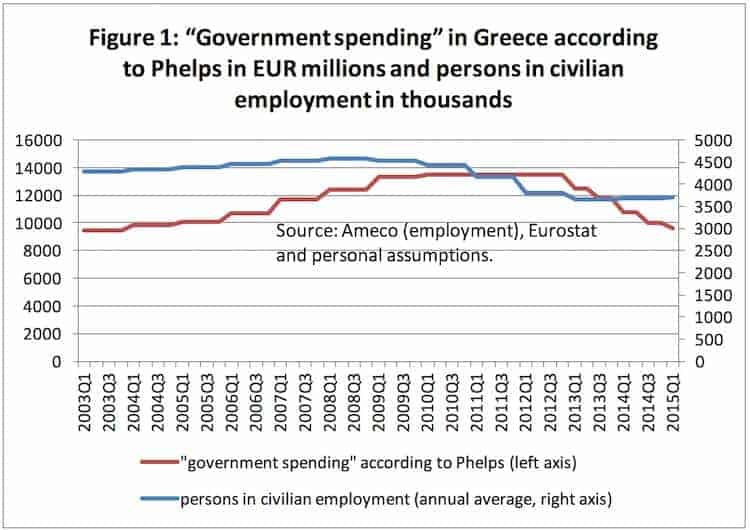 Government Consumption And Government Spending Are Not The Same Thing

What does Phelps actually mean by “government spending”? He cannot mean government spending as per the European system of accounting, because that was still at €88.4bn in 2014 according to Ameco. Even if that were artificially divided up into quarters in order to adopt the quarterly representation used by Phelps, it would result in €22.1bn or more than double the amount asserted by Phelps of almost €10bn.

The use of quarterly data indicates that Phelps did not in fact use the whole of government spending as a basis, but rather government consumption, i.e. state purchases of goods and services, which is usually published in the form of quarterly figures. Indeed, Eurostat (dated 20 August 2015) states real government consumption, neither seasonally adjusted nor working day adjusted, (reference year: 2010) for the first quarter of 2015 was €9.6bn for Greece — the exact figure quoted by Phelps.

But even if Phelps’s analysis only applied to government consumption (a mention of this would have been useful!), it would still help to shatter the prevailing explanation for the crisis: if almost half of government spending until 2012 was not subject to any real cuts, the degree of austerity may have been much smaller than previously assumed. This would also correspond to prevailing preconceptions: the Greeks have not questioned their government consumption, i.e. their “inefficient, inflated” public employment sector for a long time and may therefore have “delayed the necessary reforms for much too long”. 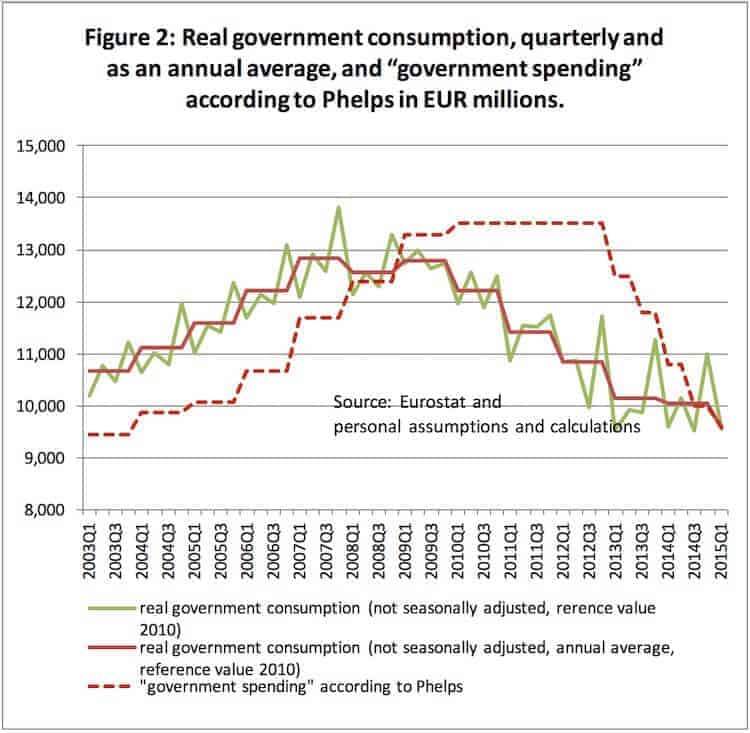 In fact, the problem is that Phelps’s analysis is quite simply wrong: his portrayal of the development of government consumption, as reproduced in Figure 1, does not correspond to reality — or to quote Phelps, “misreads history”!

Therefore, Figure 2 shows the actual and annual average data for real government consumption (neither seasonally adjusted nor working day adjusted) and compares it with the reconstructed values from Figure 1, which Phelps asserted in his commentary (Eurostat, dated 20 August). This shows that real government consumption suffered a small drop as early as 2008, recovered in 2009, and then plummeted in 2010 – around three years earlier than claimed by Phelps.

The Correlation Between Government Consumption And Employment Is Clear 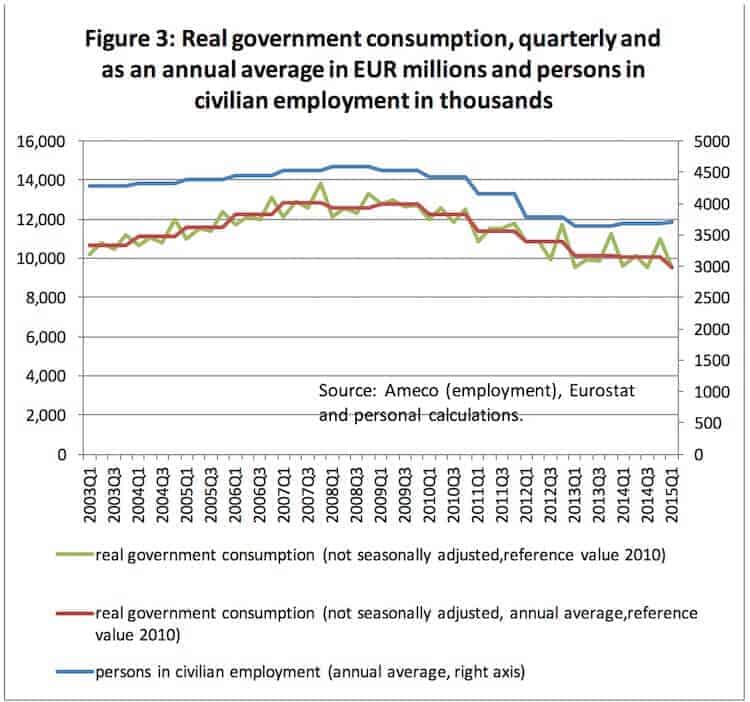 How could this data error have arisen? Only Edmund Phelps himself can answer that, but it appears that the time axis slipped by about three years or 12 quarters in the relevant period until 2012 (see Figure 2). When reconstructing the data in Figure 1, I moved the time axis by exactly three years for that reason, so that the values for 2003 correspond to those of 2000 in reality. In addition, I had to raise the plateau a little, as the annual average values actually remained below €13bn rather than rise to €13.5bn.

Another factor supporting the theory that moving the time axis was the cause of the confusion is that Phelps wrote: “€9.6bn in the first quarter of this year is, in fact, higher than it was as recently as 2003.” In reality, spending in 2003 was still over €10bn. You have to go back three years to 2000 to find annual average values that are below €9.6bn.

Whatever the reason, Edmund Phelps’ denial of austerity in Greece is simply wrong. Therefore the history of austerity policy and its impact in Greece does not have to be reinterpreted let alone rewritten.

This article was published in German for the first time in a slightly different version on the Arbeit & Wirtschaft blog on 3 September after a German-language commentary by Edmund Phelps was published in Handelsblatt on 20 August 2015.