Mainstream economists excel in scaremongering about the dismal effects any policy that tries to correct market forces may have on economic performance. By arguing that such a policy will destroy jobs, things are even turned upside down. Because of the presumed job losses, social policy suddenly becomes anything but social while liberal economic policy is actually the best social policy you can get.

Nowhere can this be seen more clearly than in the discussion on minimum wages. Indeed, the standard argument is that a minimum wage will automatically destroy those jobs that are less productive, thereby barring workers, in particular low skilled workers, from a job. In other words, the main effect of minimum wages is to create ‘outsiders’ for whom the higher minimum wage is of no benefit since they are out of a job altogether.

This, at least, is the narrative developed by the mainstream. What about the reality? Here, the experience of Germany with the introduction in January 2015 of a national minimum wage of €8.50 an hour is highly instructive.

As expected, the plan to introduce a minimum wage was met with alarmist warnings from mainstream economist headquarters. For example, in their joint spring 2014 forecast, the German economic institutes warned of 200.000 jobs being destroyed and of a visible and immediate increase in unemployment from January 2015 onwards. However, what happened is the exact opposite. Unemployment in Germany has not increased but continues to go down instead. It fell by 250.000 from over 3m in January to 2.7m in July 2015 (latest available data).

Moreover, comparing this year’s trend with the previous year shows that unemployment has actually been falling at a faster pace after the minimum wage was introduced. As can be seen from the graph below, the number of unemployed has fallen at a rate between 3.3% and 4.3% each month between January 2015 and July 2015 (compared with the number of unemployed in the same month of the previous year). Over the course of 2014, unemployment was also falling but at a much slower pace, between minus 0.1 and minus 1.5%. 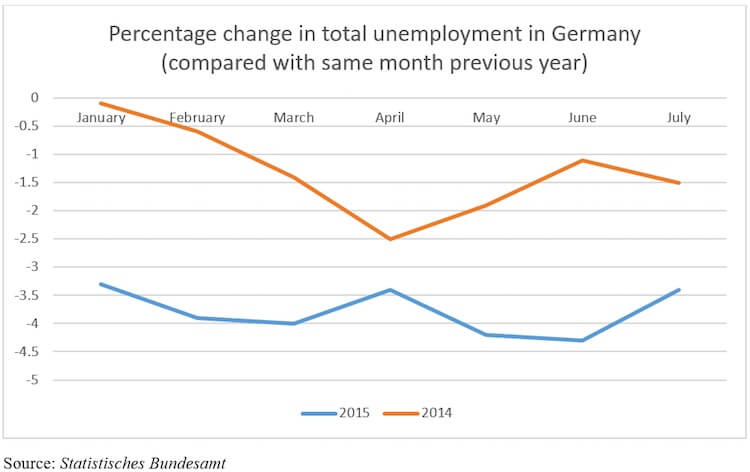 At the same time, the Bundesbank also points to the important (and beneficial!) shifts that are going on behind the aggregate numbers. While the notorious German mini jobs paying a maximum of €400 a month are being largely scrapped, there is at the same time an equally large creation of regular jobs paying normal social security contributions. In April and May alone, no less than 125.000 additional jobs covered by normal social security were created. This phenomenon is particularly manifest in those sectors where half of all German low-wage workers are employed (retail, hotels, transport and other services). According to the Bundesbank, in these sectors alone the number of regular employment contracts increased by 60,000 over and above the usual increase observed in recent years (!).

In other words, the effect of the minimum wage in Germany is not to destroy jobs but to force employers to offer “regular” jobs, jobs that are covered by social security and pay this €8.50 an hour wage. It confirms what trade unions have been saying for many years: Labour market flexibility does not create new jobs. Instead, flexibility mainly drives the good jobs out of the labour market by allowing employers to transform existing and regular jobs into precarious and/or badly paid jobs.

Equally positive is the minimum wage’s impact on the wages of particular groups of workers. Workers in eastern Germany with the lowest level of education or training saw their wages rise by a robust 6% to 9% in the first quarter of 2015 whereas the increase for managerial and highly qualified staff in the same region was limited to 3%. The graphs below (respectively western and eastern Germany) provide more detail on those sectors where the minimum wage has had the greatest impact. Some spectacular increases can be observed with those in specific sectors far exceeding the average wage increase. 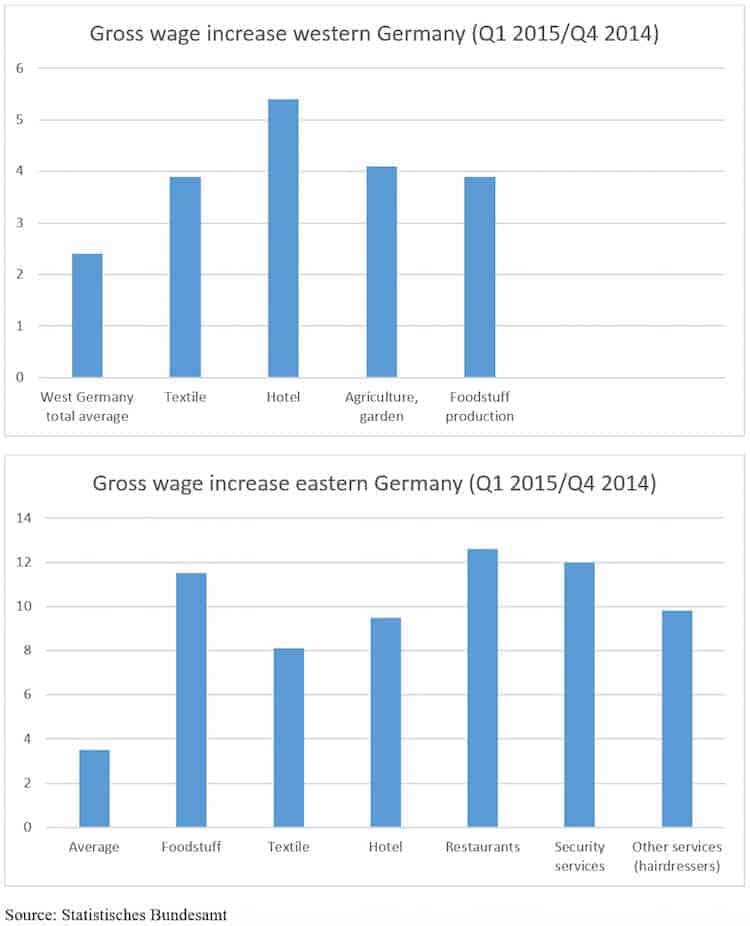 Overall, the Bundesbank estimates that the introduction of the minimum wage has increased average wages in Germany by 0.5%, possibly even by 1%.  In fact, it also notes that, thanks to the minimum wage, ‘wage drift’ has turned positive again: Actually paid wages have increased a bit faster than collectively bargained wages in the first half of 2015 and this after zero or even slightly negative wage drift in the two previous years.

What About The Effect On The Business Cycle?

The Bundesbank would of course not be the Bundesbank if it didn’t add some form of caveat. This comes in the form of the argument that negative job effects are not visible because the minimum wage has been introduced at the same time as Germany is benefiting from an economic upswing. In other words, according to this argument, it is the process of growth that is driving job creation, thereby providing a distorted picture of the impact of the minimum wage on jobs.

It is certainly correct to say that Germany is experiencing a more pronounced economic recovery than many other euro area countries. However, German growth dynamics should not be overstated either. In fact, comparing it in the first half of 2015 with the same period in 2014 shows that the expansion of economic activity in both years was rather modest and also almost identical. In cumulative terms, it was 0.6% over the first half of 2014 and 0.7% in 2015. That is scarcely a big difference. 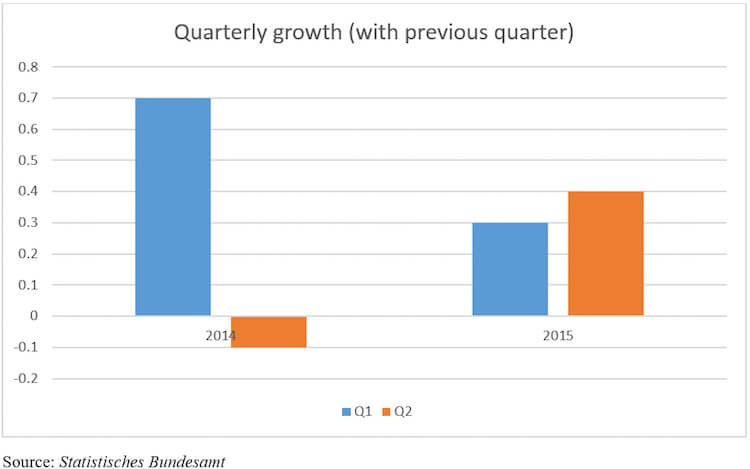 If, with economic activity expanding in 2015 at a similar pace as before, unemployment goes down faster and this despite the introduction of a minimum wage, then the Bundesbank argument of “a rising tide lifts all boats and blurs the picture” is decidedly beside the point.

When reading the stream of documents coming out of the European Semester process, one is struck by how much the Commission’s analysis is dominated by mainstream economic thinking when it argues time after time that wages should be in line with productivity at the level of individual companies and individual workers. Such a view creates a profound bias against minimum wages, as can be seen again from the latest batch of country specific analyses and recommendations where France, Slovenia, Croatia and Belgium receive clear warnings on the effect of minimum wages on job performance.

Such warnings, however, look rather silly after the experience of Germany. The introduction of a rather high minimum wage (€8.50  represents 50% of the median German wage!) resulted in higher wages in general, in substantially higher wages for the lowest paid, in mini jobs being replaced by regular jobs while job creation continues and the trend fall in unemployment even accelerates. Mainstream economic analysis is definitely wrong. The Commission should wake up and smell the coffee.