On September 17, the Federal Reserve postponed again the decision – ‘announced’ many times in advance – to raise interest rates toward “normal” levels after eight years of expansive monetary policy at zero. During this period, the growth of the monetary base has driven long‐term rates to historic lows and thus enabled a recovery to pre‐crisis levels of investment and employment.

Some doubts have been cast on the real nature of this expansionary phase, since the unemployment rate has been partially reduced thanks to a large cut in the active labour force and not to any increase in real jobs. Anyway, the general consensus is to consider the Fed’s recent policy as a great success.

In this context, a progressive tightening of monetary policy was entirely due, but first the Chinese government and then the International Monetary Fund and the World Bank put pressure on Ms Janet Yellen and the board of the US Central Bank governors with a severity that became impossible to ignore.

Markets didn’t react well, although the worst fears in the event of a rate rise were that the predictable strengthening of the US dollar would badly hurt emerging economies exposed to dollar‐denominated debt, notably China. Negative consequences were also feared for the still insecure European recovery. Some have suggested a “disappointment” among market participants due to the Fed’s loss of credibility:  it had been very active in generating pre-meeting public expectations but then, when the moment came, stuck to its previous position. This view of the facts is not supported by the data: the reality is that the markets had been expecting for weeks that the Fed would leave rates unchanged.

Let’s try for a better understanding of what’s going on here. Traders analyze the performance of financial derivatives (futures) on the “Federal Funds rate”, i.e. the rates set by the Fed for interbank loans in a day’s time (overnight), in order to predict the future course of interest rates and in particular the probability or otherwise that the Fed may modify rates; these are useful information sources for setting appropriate trading strategies. The Fed itself is aware of these market expectations and takes it into account during its decision‐making process.

In August 2015, the market estimated a low probability of a rate rise (in the range 20%‐30%). Ex‐post it is possible to understand why. After the debacle in the financial markets caused by the undocking of the yuan (renminbi) from the dollar there was, in fact, a dangerous reduction in the foreign exchange reserves of the Bank of China as it tried to defend the exchange rate by selling assets in dollars, euro and yen on international markets and buying yuan. This process led to the liquidation of almost $150bn, of which $100bn would appear to be US government securities (Treasuries). If one thinks that Quantitative Easing (QE) is a purchase of government bonds by a central bank, this selling represents a real “QE on the contrary” (Quantitative Tightening), i.e. a reduction of liquidity in circulation that threatens not only the real US but also the global economies.

In fact, a rate hike by the Fed would already impose a reduction in liquidity: funds would be attracted to the central bank and this would slow lending to the real economy as well as further reducing the threat of inflation. It is a move that can be addressed only by healthy economies, such as that of the US, although inflation (excluding energy) is still hovering dangerously close to zero. However, in the delicate moment that China and the emerging economies are traversing, even a little touch upwards in US rates (or just the expectation of a rise) would cause a strengthening of the dollar, a weakening of the yuan and a sudden worsening of conditions in emerging economies. Moreover, if the Chinese government would continue to defend the exchange rate it would increase the “QE on the contrary”, subtracting more liquidity from markets and threatening to send the global economy into recession, with widespread and very severe consequences on employment.

This is why even a small increase of 0.25% in the Fed’s Target Rate matters much more than it would seem. Markets were fairly sure that the Fed would not have risked such a cascade effect and the Fed knew that markets knew. The present situation is no different: even in October the Fed funds indicate an even lower probability of tweaking interest rates – at around 10%. (Others disagree with this eventuality.)

Hence, it’s not surprising that the markets are performing below par. To understand this, we need to look more towards the long term. The probabilities that the Fed will execute an interest rate hike from December onwards have sunk steeply in the last few days. Despite this, on 25 September, Yellen reiterated that monetary tightening had only been postponed for a few months; markets trusted her only in the very short term but just a few days later – missing any official confirmation of her view – expectations have been quickly adjusted downward for all future dates of FOMC (Fed open market committee) meetings. 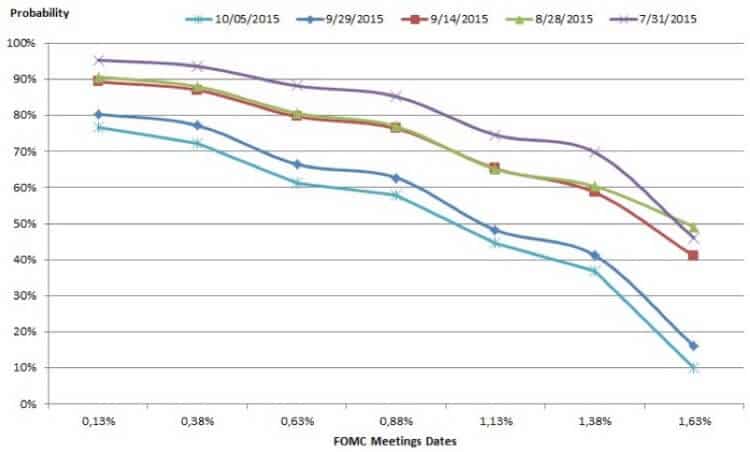 In a nutshell, the argument that the Fed is only postponing the cycle of rates normalization should be tested against the challenges that the global economic slowdown (sparked by the problems of emerging countries and other weak macro‐regions, including the Eurozone) is provoking. The conditions of the jobs market and the looming deflationary scenario will likely limit the FED options for the foreseeable future.

Marcello Minenna is head of the quantitative analysis unit in Consob (the Italian Securities and Exchange Commission). He has taught quantitative finance at Bocconi University and at the London Graduate School of Mathematical Finance. He is a regular writer for the Wall Street Journal and Corriere della Sera and is a member of an advisory group which supports the economic analysis of the biggest Italian trade union, CGIL.