I have not written much on Brexit because I do not have a strong or particularly well-informed view of it. My personal hope is that Britain will choose to remain in the EU – but that is as much because of a belief that without Britain the EU will likely become less democratic and more wrong-headed as it is because of the likely economic costs of Brexit.

Yes, I do think exit poses significant economic risk to Britain (and possibly to the world economy), though I believe there are very large margins of uncertainty around the quantitative prognostications presented by the U.K. Treasury and many British economists. But there are also serious questions posed about the nature of democracy and self-government in the EU as presently constituted.

Ambrose Evans-Pritchard (AEP) has now written a remarkable piece that makes the political case for Brexit. AEP makes clear that he has little in common with the jingoistic and nativist tone of the Brexit campaign. The distortions and lies promoted by the Brexiteers aside, the referendum does raise a serious question about how Britain will be governed:

“Stripped of distractions, it comes down to an elemental choice: whether to restore the full self-government of this nation, or to continue living under a higher supranational regime, ruled by a European Council that we do not elect in any meaningful sense, and that the British people can never remove, even when it persists in error.

We are deciding whether to be guided by a Commission with quasi-executive powers that operates more like the priesthood of the 13th Century papacy than a modern civil service; and whether to submit to a European Court (ECJ) that claims sweeping supremacy, with no right of appeal.

It is whether you think the nation states of Europe are the only authentic fora of democracy, be it in this country, or Sweden, or the Netherlands, or France ….”

The trouble is that the EU is more of a technocracy than a democracy (AEP calls it a nomenklatura). An obvious alternative to Brexit would be to construct a full-fledged European democracy. AEP mentions Yanis Varoufakis, a Brexit opponent, who has argued for something like “a United States of Europe with a genuine parliament holding an elected president to account.” But as AEP says,

“I do not think this is remotely possible, or would be desirable if it were, but it is not on offer anyway. Six years into the eurozone crisis there is not a flicker of fiscal union: no eurobonds, no Hamiltonian redemption fund, no pooling of debt, and no budget transfers. The banking union belies its name. Germany and the creditor states have dug in their heels.”

All of this is of course what I tried to highlight with my “political trilemma of the global economy,” reproduced below. 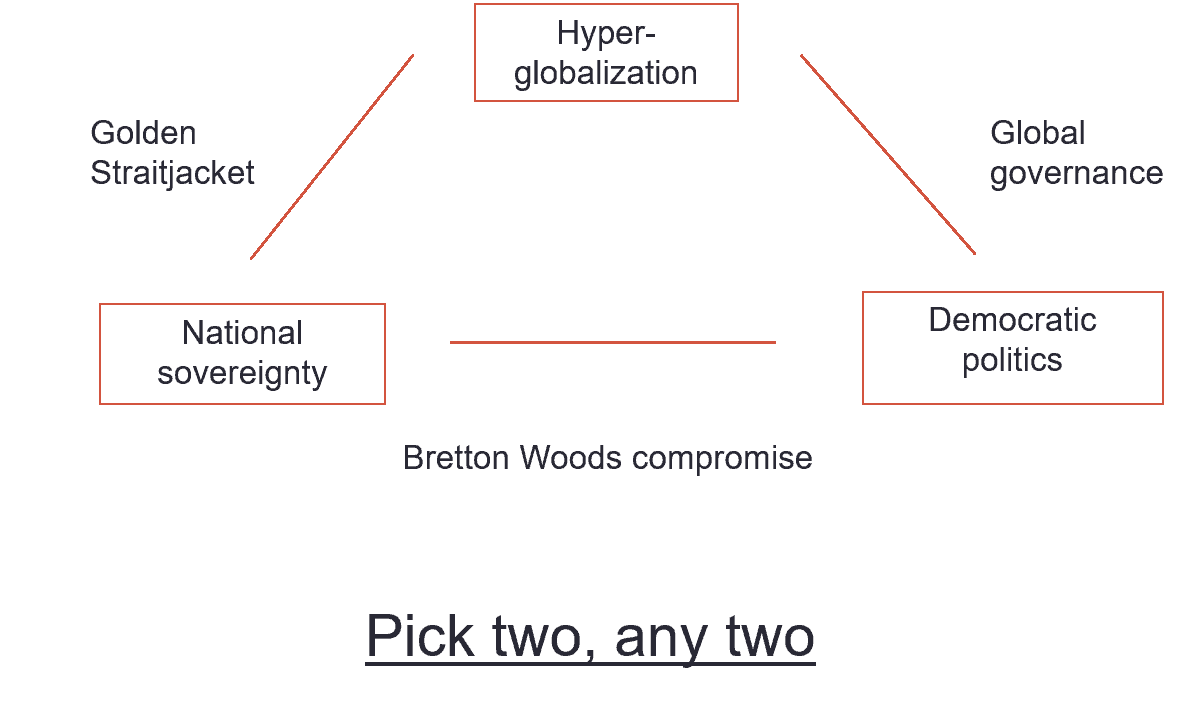 The trilemma suggests democracy is compatible with deep economic integration only if democracy is appropriately transnationalized as well – the solution that Varoufakis favors. AEP, by contrast, believes a democratic and accountable European super-state is neither feasible, nor even desirable.

Note that the tension that arises between democracy and globalization is not straightforwardly a consequence of the fact that the latter constrains national sovereignty. There are ways in which external constraints – as with democratic delegation – can enhance rather than limit democracy. But there are also many circumstances under which external rules do not satisfy the conditions of democratic delegation. See the discussion here.

AEP believes that European rules clearly lie within the latter category. In addition to the European bureaucracy (and its treatment of the euro crisis), he is especially bothered by the broad authority the European Court of Justice (ECJ) has over national policies, without right to appeal. As for Britain’s opt-out: “Need I add too that Britain’s opt-out from the Charter under Protocol 30  – described as “absolutely clear” by Tony Blair on the floor of the Commons – has since been swept aside by the ECJ.”

I do not have a clear view on the substance of AEP’s argument – as to whether Britain’s self-government is sufficiently impaired by the EU, or its opt-out has been nullified by the ECJ. But it is clear that the EU rules needed to underpin a single European market have extended significantly beyond what can be supported by democratic legitimacy. Whether Britain’s opt out remains effective or not, the political trilemma is at work. In AEP’s evocative language,

“The [European] Project bleeds the lifeblood of the national institutions, but fails to replace them with anything lovable or legitimate at a European level. It draws away charisma, and destroys it. This is how democracies die.”

I first thought of the globalization trilemma when I was asked to contribute to a special millennial issue of the Journal of Economic Perspectives (in 2000), where I was asked to speculate about the nature of the world economy in 100 years’ time. I presented it as the political analogue of the macroeconomic trilemma of the open-economy well known to economists (we can have at most two among monetary independence, free capital flows, currency pegs). I thought then, and still do, that it will increasingly shape the evolution of world’s political economy.

At the time, I viewed the EU as the only part of the world economy that could successfully combine hyperglobalization (“the single market”) with democracy through the creation of a European demos and polity. I expressed the same view, somewhat more cautiously, in my 2011 book The Globalization Paradox.

But I now have to admit that I was wrong in this view (or hope, perhaps). The manner in which Germany and Angela Merkel, in particular, reacted to the crisis in Greece and other indebted countries buried any chance of a democratic Europe. She might have presented the crisis as one of interdependence (“we all contributed to it, and we are all in it together”), using it as an opportunity to make a leap towards greater political union. Instead, she treated it as a morality play, pitting responsible northerners against lazy, profligate southerners, and to be dealt with by European technocrats accountable to no one serving up disastrous economic remedies.

As Brexit opponents keep reminding us, the economic costs of Britain’s departure could be indeed sizable. Reasonable people have to make up their own mind as to how those costs stack up against the damage to democratic self-government. EAP is fully aware that his choice entails taking a “calculated risk.”

My generation of Turks looked at the European Union as an example to emulate and a beacon of democracy. It saddens me greatly that it has now come to stand for a style of rule-making and governance so antithetical to democracy that even informed and reasonable observers like AEP view departure from it as the only option for repairing democracy.

This article originally appeared on the author’s blog.