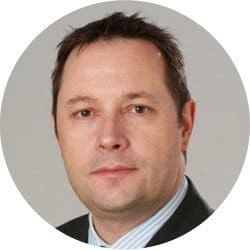 Careers are alive and well. Despite the widespread opinion that we are witnessing the end of careers and flexibilization of working life as a whole, the data does not bear this out. In fact, a large majority of people seem to be in stable employment for most of their working lives.

The average duration of the most important job in a person’s life is over 20 years. Over 90 percent of those who are close to retirement have held a job for longer than 20 years on average. There are more and more workers who work longer and retire later, most of them not forced to do so by economic necessity. Yet there is the overall impression that employment is no longer secure and precariousness is increasing. In principle, most jobs end early but the longer a job has lasted, the less likely it will end. The first jobs a person holds in his or her life are short but a large majority of people will end up in a long-term employment relationship eventually.

It is true that the industrial age with large-scale companies, having quasi monopolies and offering lifetime careers to their workforce, is a bygone model if it ever really existed. Many companies are created every day but they also quickly disappear: you only have to think of start-ups, often created around an idea, or dot.com businesses or short-lived service enterprises. Only half of the companies born at one time survive more than five years (see here). They do, however, only represent a small fraction of the businesses and are usually small-scale enterprises employing typically less than five employees. For example around 5 to 10 percent of a country’s workforce work in Professional, scientific and technical activities (see here) as compared to one worker in four in industrial manufacturing. About ten percent of companies across Europe are new companies and around 13 percent of companies disappear each year. However, most survive and the larger they are the higher their chances of survival.

The apparent contradiction between high turnover on the labour market and long-term employment relationships is therefore only superficial. Nevertheless, it is of course crucial that workers as well as employers become more aware of dynamics such as new skill demands related to the introduction of new technologies necessitating more and more frequent career changes. Career change, however, does not necessarily mean the end of an employment relationship. It is best understood as a joint effort between employers and employees to commit to a mutual investment in a better fit for the future. This is also necessary as there will be labour and skill shortages due to demographic aging, only mitigated by the so-called industrial revolution 2.0 and the large scale robotization of manufacturing.

Case studies have shown that most of the efforts to introduce mid-career reviews (MCR) have not been as successful as expected. A MCR is a systematic check of the fit between the worker and the workplace, that should enable employers and their staff to think about career flexibility well ahead of time (see here). The MCR is a structured interview where employees review their career achievements critically to reflect on the years to come, focusing on strength and weaknesses and trying to find an optimal fit between their expectations and the necessities of their employer. Career reviews, with the role of identifying strengths and weaknesses of workers, need to be done within an employment relationship and not as a part of active labour market policy for the unemployed, as at that stage intervention is more difficult. Further, if done inside companies by HR departments, a trust relationship is lacking. Pilot programs in the UK and Flanders have shown that career intervention for the unemployed have not been as successful as expected (see here, P49FF). The following table critically reviews and summarizes three MCR projects that were carried out. The UK and the Flanders (Belgium) projects were targeting mostly job-seekers and employees with difficulties. The approaches taken were highly professionalized in the Flemish case and much more varied and not standardized in the UK case. Only in the French case, which was not a pilot study, is the MCR carried out by HR professionals or line managers, but is often seen as a performance appraisal. Each of the cases offers lessons to learn: the professional standards of the Flemish study, the company-based approach in the French case and the legal obligation to carry out MCR if the employee requests this and the involvement of external objective actors such as in the UK case with Unionlearn, all deserve to be taken as good practice examples for bringing this valuable tool further forward. 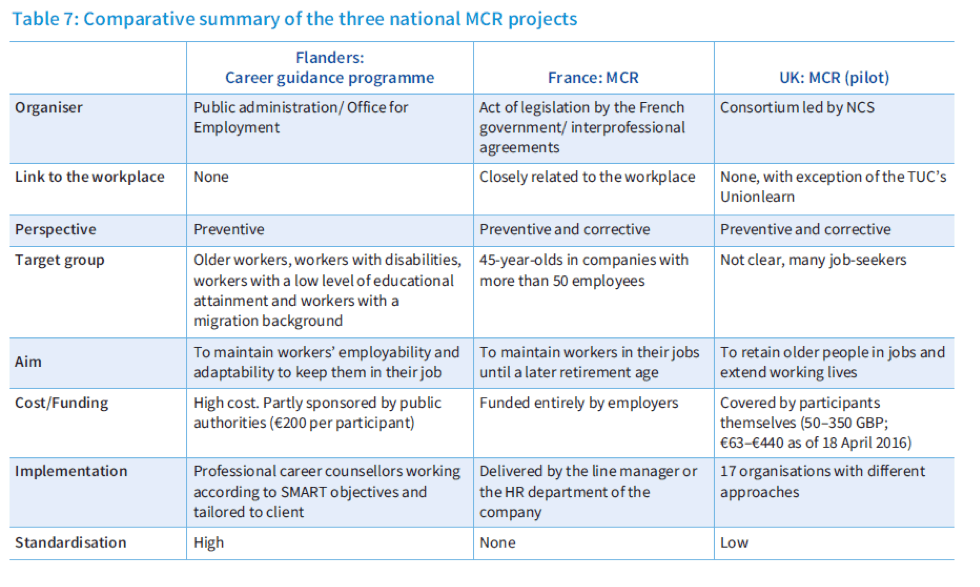 The best solution for employers and their employees is to think of the employment relationship as a long-term mutual investment and to undertake career revisions early on in the relationship, typically after the first ten to 20 years, when employees are in their forties. The MCR should be done with regard to health, skills, financial situation, personal/family situation and motivation. The outcome should be open, but in principle aim at a mutually agreeable work relationship. The assessment should be objective and carried out according to high professional vocational standards and, if possible, involving employee representatives. In fact, the way this was done in the UK with the involvement of trade unions seems highly promising as a model. A person’s entire life is the subject of a MCR: finances, health, values, interests, skills, relationships and networking. The interview is carried out by a trusted trade union intermediary in the workplace and takes place in three stages: The starting phase establishes the infrastructure, builds trust with employers and informs workers on MCR; the second phase consists of one-to-one or group sessions where issues and themes are explored aims set and actions planned; and finally the review and follow-up stage where further individual support is given as well as engaging employers in the process.

The main idea is that even if all goes well, there is no reason for not thinking ahead and anticipating changes, because if one waits until it is too late, changes might become impossible. Just as for companies it is risky to stick to the same products, not innovating and not thinking ahead, as this may lead to business failure, not being attentive to one’s career development, skills and life in general can lead to job loss. In particular for workers aged 50+ losing a job can be catastrophic as the likelihood of finding another is very low. The MCR can help prepare workers to be more resilient to challenges they face in the future, when it is still time. There is no reason to think that this could not mutually beneficial for workers and their employers, in particular in an age where the most precious resource of companies is their pool of human capital. Companies that do not take this on board fail to realize their full potential or, worse, go out of business.

Jean-Marie Jungblut is a research officer in the Social Policies unit at Eurofound. Since joining Eurofound in 2009, he has contributed to the annual reports of the European Restructuring Monitor and the European Jobs Monitor.