I grew up in Texas where state and local judges are elected, not unusual in the United States. In most states minimum legal qualifications are required for a person to stand for judge. Not so in Texas, where we had the saying:

in some places you need a law degree to run for judge, but Texas is more democratic – any damn fool can run.

Somewhat the same principle seems to apply to economics reporting in Britain.

Is the UK economy about to experience a strong recovery and if so, can Chancellor George Osborne claim credit as he does in his spring budget statement? In pursuit of “balanced” reporting, what should a journalist do when the position on one side of the argument is utter nonsense? Does one follow the “damn fool” principle and dutifully report it as if it were credible? It would appear that Larry Elliot adheres to this approach (“With George Osborne’s 2014 budget comes the hope of speedy recovery“).

The facts are the following. First, if the UK economy has begun a recovery, this will be the slowest recovery ever recorded (i.e., back at least 50 years, see chart below from the Office of National Statistics). Second, George Osborne claims that his deficit reduction program has prevented so-called financial markets from pushing up public sector borrowing rates. However, no one has produced any empirical evidence of a link between public borrowing and interest rates (demonstrated in my new book). Third, deficit reduction has been a failure. Again, according to the Office of National Statistics public sector borrowing for the first ten months of this fiscal year is over £15 billion more than for the same ten months of fiscal year 2012/13. 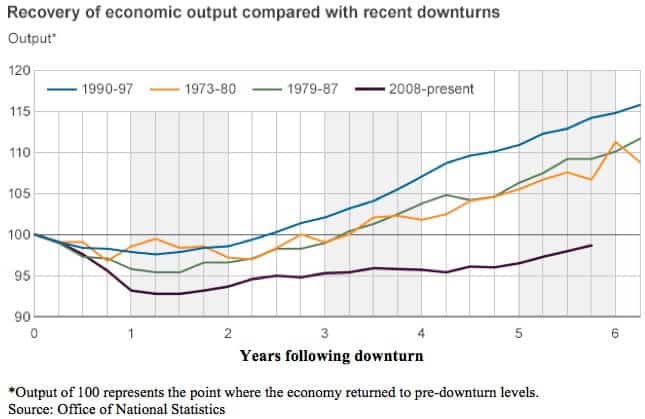 Slowest recovery, no impact of austerity on interest rates and public sector borrowing up, not down. So what do we make of the following passage from an article by Guardian’s economics editor?

The case for the chancellor is that he did the best he could in the circumstances. Had he not shown a willingness to get tough with the deficit, the financial markets would have punished Britain. It would have been more difficult to sell government bonds, and this would have pushed up the cost of long-term borrowing.

As it is, the commitment to austerity has kept the bond market vigilantes at bay, allowing the Bank of England to keep official interest rates at a record low of 0.5% for the past five years. The pick-up has been slow, in part because the British economy is dominated by financial services and in part because of the crisis in the eurozone.

While every reader should hope for fair and balanced reporting, readers also have a right not to encounter absurd misrepresentations presented parallel with fact (note the Guardian motto, “Comment is free, but facts are sacred”). The Chancellor’s commitment to austerity has not kept “the bond market vigilantes at bay”. Or, if there is evidence to support that unlikely assertion, the reporter should present it.

Add to that the absence of any evidence in the article that the size of the financial sector and the euro crisis are major causes of dismally slow recovery. For the last four years the problem of the UK economy has been inadequate aggregate demand. No one disputes that. The argument is over whether that inadequacy should be overcome by stimulating private investment through some unverified link between austerity and expectations, or via the obvious and direct route of public expenditure.

Imagine that the Chancellor attributed the slowness of recovery to a particular astrological alignment of stars and planets. Would the Guardian report it alongside other explanations? Perhaps, because it is no less absurd than suggesting that austerity policies, which have not reduced borrowing over the last year, have prevented a speculative run on UK bonds.