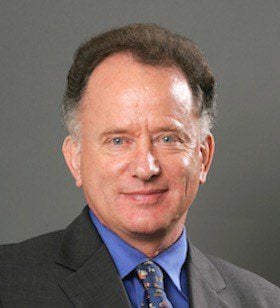 How has the European Union’s influence on the global stage changed since the turn of the century? Douglas Webber presents findings from a study of Europe’s power in seven key policy areas. He finds that on every area with the exception of regulatory policy, the EU’s power has either remained steady or declined since 2003. While some of this decline is attributable to the economic problems associated with the Eurozone crisis, it is also a mark of the difficulty EU leaders have experienced in negotiating common positions at the European level.

The United States of Europe. The European Superpower. Europe: The Quiet Superpower. Europe’s Promise. Why Europe Will Run the 21st Century. These books and journal article titles reflected the confidence of their authors, as the 21st century dawned, that the European Union would become a world superpower or even the dominant power in world affairs. In a recent study, I try to assess how, in the first 15 years of the new century, the EU’s world power has evolved and to what extent these optimistic prognoses have materialised.

For this purpose I define ‘world power’ as (in this case the EU’s) capacity to cause other actors to behave in ways that the EU wants and they would not do otherwise. I distinguish between three fundamental types of power resources or capabilities: Military power, which involves the use or threat of the use of physical force; economic or financial power, which involves the use or threat of the use of negative or positive material sanctions; and ideological (‘soft’) power. Ideological power may be exercised either directly, as when an actor persuades another of the inherent desirability of the values that it purports to advance, or indirectly, in as far as it constitutes a ‘model’ that other actors strive, because of its attractiveness, to emulate. Except in the latter case, the exercise of power typically requires the mobilisation and deployment of one or some combination of these three different kinds of resources or capabilities.

To assess trends in the EU’s world power, thus defined, I compare and contrast developments and the outcome of international conflicts in several issue-areas in which the EU has been a protagonist during roughly the decade preceding and the 15 years following the turn of the century. Most issue-areas are the ones – regulatory, environmental (climate change), trade policy, and the promotion of democracy, human rights and regional cooperation – in which the advocates of the ‘European superpower’ thesis (and, in some cases, the EU itself) anticipated that the EU would play a central if not dominant international role. Two others – monetary and security and defence policy – are issue-areas where, as a result of the launching of the euro and the European Security and Defence Policy in 1999, numerous observers expected the EU to become an increasingly powerful international actor. My findings, summarised in the table below, show that overall the EU is a declining rather than a rising power.

Table: Assessment of the change in EU power in key areas since 2003 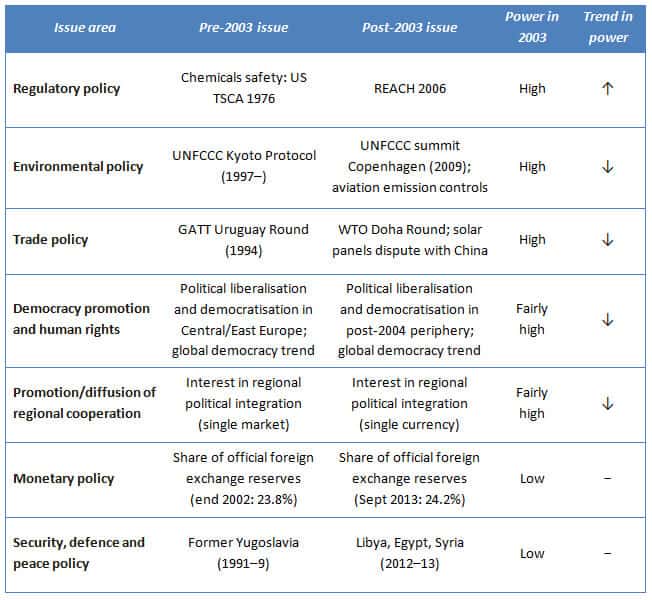 Note: The table shows a summary of the study’s findings across seven different policy areas. Each assessment of how the EU’s power has changed from 2003 until the present is shown in the column on the right, based on a comparison of the EU’s actions in the issues shown in the second and third columns. For more information on the calculations see the author’s longer paper.

Within this overall trend, the EU’s power varies significantly by issue-area. Of the issue-areas covered, regulatory policy is the only one in which the EU’s power has risen and it can fairly be labelled a dominant power. It remains an important actor in international trade and environmental politics, suggesting that its power is greatest in those issue-areas where it can deploy its economic and financial resources, in particular its control over access to the EU market. As other scholars have noted, its power also varies significantly by geographic location. Beyond its periphery, where it cannot deploy its ‘accession card’ as an instrument of power, its power weakens rapidly. It is far more a regional or continental than a genuine world power.

Even on its periphery and in most of the issue-areas where the EU is best equipped to wield influence, however, its power appears to be receding. It has not had the same ‘transformative’ impact in the Western Balkans, North Africa and Eastern Europe during the last decade that it arguably had prior to 2004 on Central Europe. Nor has it been the powerful actor in international trade and environmental politics so far in this century that it was in the 1990s.

This judgment applies all the more for the world outside Europe and other issue-areas. In those areas where the EU is frequently rated a major ideological or ‘soft’ power, relating to democracy, human rights and regional cooperation, its gravitational pull has weakened. Regional monetary cooperation has found far fewer emulators elsewhere than did regional trade liberalisation in the wake of the launching of the Single Market project. If the EU cannot be said actually to have declined (but rather stagnated) as a world security or world monetary power, this is only because it was neither at the start of the century.

The decline of the EU’s power may be attributed primarily to its relative economic decline, which the Eurozone crisis has accelerated and accentuated. The diminished size of the single market relative to that of far more rapidly growing ‘emerging’ countries, especially the BRICS, has weakened the EU’s bargaining power – and not just on economic and financial issues. Economic decline and crisis have diminished the volume of financial resources that the EU can deploy abroad to promote its objectives relating, for example, to climate change and human rights. They have also reduced the capacity of member states to maintain military spending, thus curtailing the EU’s capacity to project or credibly threaten to project military power. And they have made the EU a less attractive model for other regions to emulate, thus damaging its ‘soft power’ as well.

The decline of the EU’s power is nonetheless not a function of the diminution of its material power resources alone. Still only the US has a comparably large market. Collectively, the armed forces of the member states dwarf those of any country in the world apart from the US. If its power is declining, then this is attributable partly to the nature of the EU’s politico-institutional structures and processes, which have frequently made it impossible for the EU to adopt and implement common policies.

Whilst this has been most evident and dramatic on international security issues, it has also manifested itself in some issue-areas, such as international trade, where the EU has very strong competences vis-à-vis the member states. As the EU’s relative economic decline is likely to prove inexorable, even if the Eurozone crisis should one day have been resolved, its capacity to arrest its declining world power will depend heavily on the extent to which it can – in fact – integrate more closely politically. After the last decade, only a very optimistic observer could be confident that the EU will be equal to this (more modest) challenge, let alone that the current century will turn out to be ‘European’.

Douglas Webber is Professor of Political Science at INSEAD.