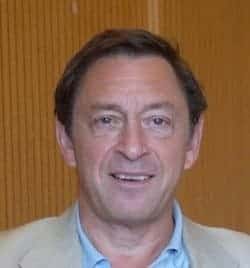 With much fanfare, Mario Draghi announced on January 22 that the European Central Bank (ECB) would be pumping â‚¬60bn a month into the financial markets until September 2016, in what is euphemistically called â€œquantitative easingâ€ (QE). This amounts to 10% of Eurozone GDP and 10% of its gross public debt. Many observers guess the flow will go on for longer than the promised 19 months..

The ECB President is described as â€œindependentâ€, i.e., he can do this without democratic consent. Indeed, the country whose population will be required to contribute most is vehemently opposed to the policy. Whether Germans are right or wrong does not alter the fact that it shows just how undemocratic economic policy has become in Europe.

A yawning democratic deficit is prompting people to oppose the neo-liberalisation of Europe. It is ominous that Mr Draghi, formerly employed by Goldman Sachs, is calling for more power to be handed to the ECB so that it can force countries to undertake structural reforms – a thinly coded message for curbing social policy and for allowing more insecurity for their citizenry.

When the QE scheme was announced, those in the financial markets described the plan as â€œbold and convincingâ€. They would say that, wouldnâ€™t they! They will be the chief beneficiaries.

QE is a blunt, inefficient, inequitable instrument ostensibly intended to revive economic growth, partly by imparting a little inflation, partly by inducing currency devaluation. However, while buying government bonds reduces government debt in the short-term, it would be better to have an EU-level fiscal injection to boost growth, especially as QE is showing signs of becoming a modern form of protectionism, inducing beggar-my-neighbour currency devaluations. These will soon be factored into financial market reactions.

Two months earlier, again with much fanfare, the new President of the European Commission (EC) announced a â‚¬315bn euro â€œinvestment plan for Europeâ€, which is mainly a means of helping investors, and particularly the European Investment Bank. None of the direct beneficiaries of either policy could be described as among those suffering from the economic crisis. And Jean-Claude Junckerâ€™s vague talk of prioritising â€œstrategic infrastructureâ€ points to long gestation periods that will do little to alleviate the suffering in the near future.

We must remember there are three EU crises â€“ insufficient demand and investment, growing inequality, and dangerous populist reactions to migration. As even the OECD has now admitted, inequality is itself an impediment to growth. It is also a cause of migration from south and east Europe to north and west.

This growing inequality has been documented to death. Every proposed economic policy, including QE, should be subject to a stress test. Will it increase inequality? If Mario Draghi answers that in the affirmative, which he must in the case of QE, then he should look for an alternative. Any further increase in inequality could do more damage than just stymy growth. The people of Europe have had enough, and the authorities would be remiss if they took todayâ€™s simmering disquiet as the worst it can get. More days of rage will do more than dent growth and send the financial markets into a tizzy.

More inequality will also tend to raise governmentsâ€™ budget deficits, because the very rich, particularly those active in financial markets, find it easy to avoid and evade taxes. Growing inequality also tends to enlarge balance of payment deficits, since the rich spend disproportionately on imported goods and services, rather than on domestic ones. 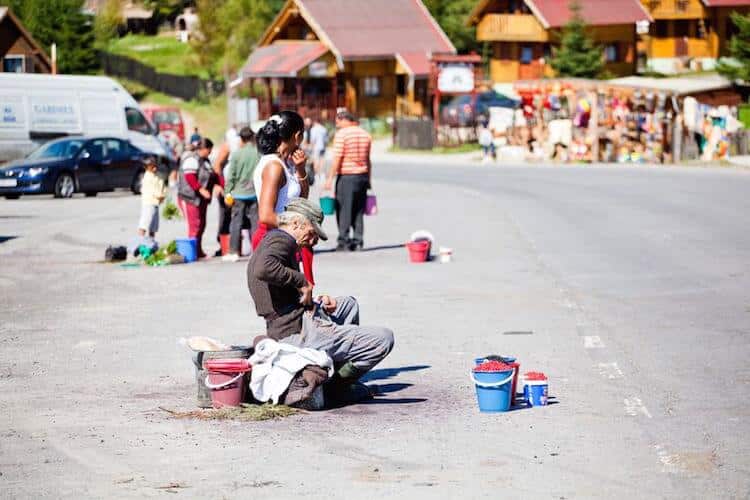 Poor people selling berries to tourists in Romania. Guy Standing argues that providing a basic income in Europe’s poorest regions would do more to heal the European economy that QE.

The crisis around migration may be based on an erroneous interpretation of its level and impact. After all, many parts of the EU need more, rather than less, migration, because the birth rate is below the reproduction rate and increasing longevity is producing an ageing population. However, sadly, what matters most is the populist reaction across the EU. It is that which must be defused. Again, the drift to the populist neo-fascist right is a reality.

A way of addressing all three crises â€“ inadequate aggregate demand, inequality and migration â€“ would be for the ECB and the EC to channel some of the funds earmarked for QE and some from Mr Junckerâ€™s â€œinvestment planâ€ in a novel direction. They could direct, say, 1% of the total (better, much more) to several of the lowest-income regions from which out-migration is high – draining them of vital human skills and energies. The transfers could be paid in the form of EU dividends (basic income, under another name).

Bear in mind that while raising aggregate demand or growth is desirable, it should be done in a way that would be most likely to stimulate local investment and demand for local goods and services. QE will not do that; direct transfers to people would.

Monthly payments could be provided to every man, woman and child in, say, four areas on a pilot basis, with the sole condition that they would only continue to receive them if they were residing in those areas. People would still be free to move. However, it would help them to be able to stay. Such payments could be made for a period of 12 or 24 months.

Many areas of the countries of out-migration have average incomes hovering around â‚¬400 a month. If every resident in selected areas was given half that for twelve months, just think how many could be helped if just â‚¬2bn were spent in this way.

This would have three positive effects. It would reduce pressure to emigrate. It would boost growth by stimulating aggregate demand, much more directly and effectively than QE. And it would modestly reduce inequality within the EU.

Unlike QE, the direct transfers would not reduce pressure on governments to cut budget deficits, if that is considered important. It should also be more palatable to German politicians, bankers and voters. It would also be consistent with a moral migration policy, ameliorating the conditions that induce impoverished Romanians and Bulgarians to try to go to countries where anti-migration sentiment is dragging governments towards illiberal posturing and policy.

By contrast, QE will intensify inequalities, have little effect on growth and will only foster a global competition of currency devaluation, with the Japanese, Chinese and even the USA allowing or encouraging depreciation in their currency in response to the decline in the euro. That would be a dangerous path to a 21st century form of protectionism. Why not use some of that new money to boost desirable growth and reduce inequality instead?

It has been estimated that the USAâ€™s QE of $4 trillion could have provided every non-millionaire household in the country with $40,000. Instead, it fostered a new round of asset bubbles. Inequality is continuing to grow.

Similarly, had the UKâ€™s QE been diverted to pay every British resident a basic income, everybody could have received about Â£50 a week for two years. Income inequality would have been reduced, economic security improved, domestic growth boosted. Instead, asset bubbles have grown, notably in the property market, along with personal debt, homelessness and resort to food banks. As cuts to social spending mount, the politicians and financial establishment should not be surprised if the anger turns on them.

An alternative approach is needed desperately. A pilot scheme would give policymakers a wonderful opportunity to see if it would work. It is not as if feeding the bankers has done more than restore bankersâ€™ bonuses to disgusting heights.