On May 1st 2004 ten countries joined the EU in the biggest enlargement of the Union to date. Moreover it was a step heavy with symbolism. Eight of the ten – the exceptions being the two Mediterranean island economies Cyprus and Malta – had until just over a decade earlier been part of the Warsaw Pact and indeed, in the case of the Baltic states, part of the Soviet Union itself. There was considerable fanfare in the media about the healing of the historical East-West rift across the European continent. In some cases immediately, in others with a delay, west European labour markets were opened to people from the new member states seeking employment. Two further eastern European countries, Bulgaria and Romania, followed in 2007, amid greater concern about these countries’ poverty and democratic credentials.

Given all this, what is striking about the tenth anniversary is that it appears to have been widely ignored by the media. The English language newspaper with the best European coverage, the Financial Times, has not reported on it at all as far as I can tell. In the German print media I was hard pushed to find anything beyond a short piece on Poland in Die Zeit.

This is all the more surprising given what has been heavily reported on, in the run-up to the European elections: the rise of anti-immigrant and more generally anti-EU parties in countries like the UK (UKIP) and France (Front National). The freedom of movement of labour, especially from central and eastern Europe, is a key plank in their opposition to the EU. On May 1st the FT reported extensively on the launch of the Front National’s electoral campaign. It quoted a supporter waiting a rally for Marine le Pen to speak, who opined: “I think we should leave the EU. It has too many countries. It doesn’t work.” One might have thought that the tenth anniversary of eastern enlargement that same day would have been a particularly good occasion to examine this claim.

The 2004 EU Enlargement Has Been a Success

The fact is that eastern enlargement has to date, and despite the damage wrought by the global economic and financial crisis, been a considerable success. The most lastingly important achievement arguably concerns the entrenchment of democracy and the rule of law (while there are currently serious concerns in this regard about Hungary, one needs to keep in mind the counter-factual of what might have happened had Orban had accumulated power but had not been constrained by the obligations of EU membership). But let me focus here on something else: the convergence of living standards.[1]

In 2004 the GDP per head[2] – a broad measure of material living standards – of the ten new and two or soon-to-be member states was considerably less than half (44.8%) of the figure for the 15 existing EU members. Ten years later the corresponding figure is 57.3%. In other words, each year the new entrants have closed the living-standards gap by an average of just over 1.25 percentage points. 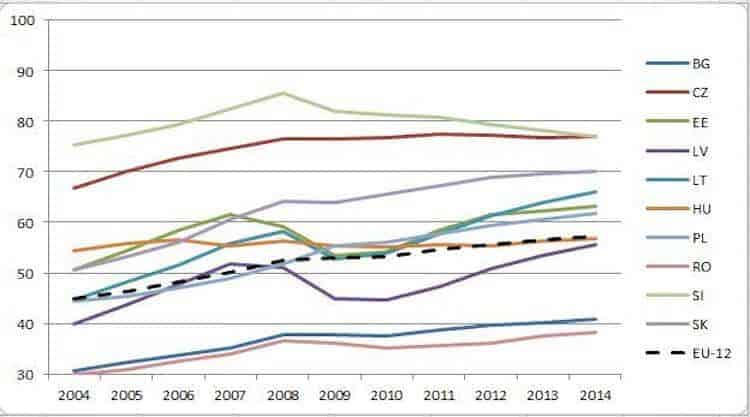 That is no mean achievement, especially when one considers that the considerably larger gap between Mexico and the USA has remained virtually unchanged over the past ten years. Mexico, linked to the US through a free-trade agreement (NAFTA), that lacks elements of a political union, still records GDP per capita of less than 30% of the American level. (It is true that the US has performed better than the EU15 since the crisis, so the benchmark is harder to achieve for Mexico. On the other hand the larger initial gap should mean more scope for income convergence).

As can be seen from the chart, convergence by the accession countries as a whole was achieved in each year, although the pace of convergence was temporarily much reduced in the crisis (0.2pp in 2010 compared with 2009). We also see a convergence within the accession group. Per capita income growth in Romania and Bulgaria has taken them from around 30% to more than 38% and almost 41% of the EU15 average, respectively, while the considerably wealthier Czech Republic and Slovenia enjoyed much smaller improvements relative to their west European peers. Consequently the gap between poorest and richest declined from around 45 to 38 pp of the (higher) EU15 income level. Lithuania and Slovakia made the most noticeable progress, Hungary and (comparatively rich) Slovenia had the least success in closing the living-standards gap.

The crisis proved a convergence setback for all the countries considered (although hardly noticeably in Poland). The losses were very substantial in the Baltics and Slovenia, although this has been followed by accelerated catch-up in the former, but not the latter. Overall the convergence dynamic has slowed in recent years.

Soul-searching about Europe and the EU is understandable given the events since 2008, and the income and job losses caused by the crisis and the inept policy response to it. Populist parties have sought to channel frustration with falling living standards and economic insecurity, not least by blaming enlargement. But the figures clearly show that eastern enlargement has been a substantial success, not least in one of its key goals, namely facilitating relatively rapid growth in material living standards in the central and eastern European accession countries. This is in marked contrast to the stagnation in relative per capita incomes recorded across the Atlantic. It is disappointing, but arguably symptomatic, that these important findings have seemingly not been considered newsworthy by the European media

[1] An important issue not considered here is the impact that eastern enlargement has had on west European economies through migration, trade competition and the scope for developing more intricate supply chains.

[2]The figure and following discussion use per capita GDP data expressed in purchasing power parities; that is, allowance is made for differences in the cost of living between countries and over time. The data are from the European Commission’s AMECO database and the 2014 figures are based on the latest EC forecast. EU-12 refers to all ten accession states from 2004 plus Bulgaria and Romania. Cyprus and Malta are so small, however, that they barely affect the figures. 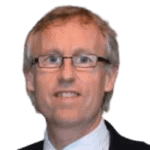