Led by the IMF, the main body of mainstream economists is now aware of the danger that debt deflation is raising for several Euro Area member states. This awareness is surely a good thing.

However, what is conspicuously absent in this discussion is the link with wages. It is as if ‘lowflation’ (as the IMF is calling it) is coming out of the blue. There is hardly, if any, recognition of the fact that too low inflation is directly caused by the strategy of internal wage devaluation that policy has been pursuing over recent years in the Euro Area.

Given this tendency to ignore the link between wage cuts and falling inflation, it does not come as a surprise that recent statistics published by Eurostat on the evolution of hourly labour costs have hardly been noticed.

Indeed, in the first quarter of 2014, the Euro area’s labour cost index, which is a measure of hourly wage costs, has barely gone up. From the graph below the continuing trend of weakening of wage dynamics can clearly be noticed. And again, why should it come as a big surprise that inflation is as low as 0.5% if hourly wages dynamics have come down to just 0,9%? 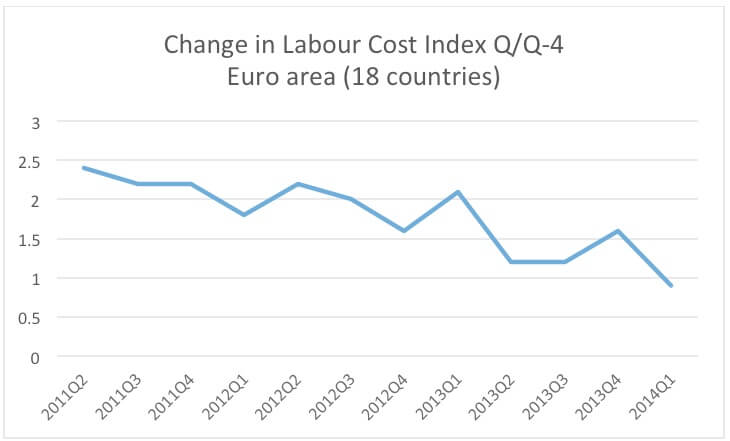 Moreover, splitting this Euro Area average out over the different member states shows that this weakening of wage trends is a widespread phenomenon. Hourly wage costs are falling in Ireland, Greece, Cyprus, Italy, and Croatia. They are barely increasing in Spain, Belgium and the Netherlands. Even in Germany, where the crisis is hardly being felt, first quarter wage dynamics are also down, just reaching 1.1%. 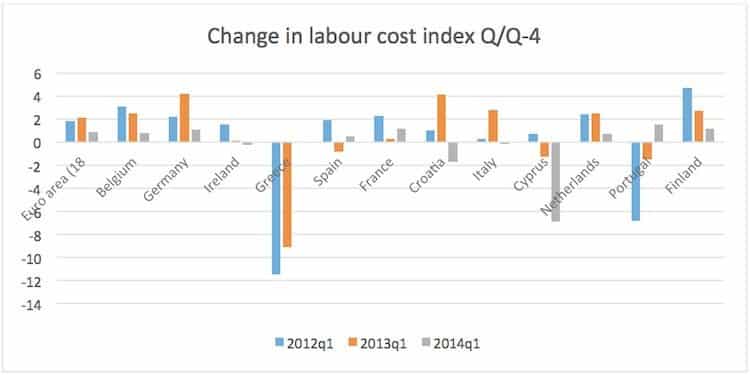 Of course, quarterly figures can be volatile and should not be taken as conclusive evidence on their own. The trend however is worrying and, together with other indicators such as falling producer prices, this is another sign on the wall that the threat of debt deflation is all too real in the Euro Area.

Money As A Veil?

The mainstream does not only fail to comprehend wage deregulation as a cause for debt deflation, it also refuses to recognise that the opposite is also true and that restoring wage formation systems so as to prevent wages from falling through the floor is key to getting back to price stability.

Instead, it seems that they are placing their hopes on monetary policy, with many calling upon the ECB to go beyond the recently decided measures such as negative interest rates and new repurchase operations. They call for massive quantitative easing. Not a single economist however (to my knowledge at least) is raising the question whether printing masses of money will really get us further away from deflation if at the same time wages are falling through the floor.

It is as if all of them have become monetarists, believing that inflation is purely a monetary phenomenon which has nothing to do with the real economy so that a central bank simply has to push the money printing press in order to get the inflation it wants. Empirically however, this is not correct as has been vividly shown by the experience of the last years when central banks have injected loads of money into the banking sector without this liquidity being transformed into credits for investment and consumption.

The drama that is unfolding at this moment is that European politics, after the electoral backlash delivered to mainstream parties, seems to be dead set on exchanging one erroneous policy (austerity) with another one (deflationary structural reforms). Politicians, irrespective whether they are centre-right or centre-left, still have not grasped the fact that if they continue to undermine wages and collective bargaining systems they will only make things worse. Low inflation will get even lower and more member states will sink into outright deflation and get caught in the depressionary trap of rising real debt burdens.

Since the economic mainstream in Europe is, once again, failing to provide correct economic policy advice, European politicians would do well to look for inspiration in Japan. There, big business, the Japanese trade unions and government jointly called on companies to negotiate big pay rises so as to end two decades of deflation. In Japan with “Abenomics”, there is at least the intellectual understanding that wages have an important role to play as an anchor for stability, an understanding that is unfortunately still missing in Europe.