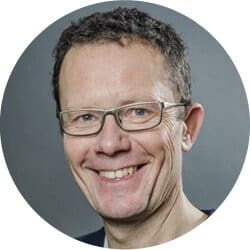 More EU citizens work than ever recorded. Twelve million moved into work in just the past four years. That is more than the total population of Belgium or Greece. That’s the exciting news. But what will it mean for Europe’s poor? At the latest count, some 119 million or 23.7 % of the EU population are still at risk of poverty or social exclusion.

Europe’s leaders have set themselves the target of ‘lifting at least 20 million people out of the risk of poverty or social exclusion’ by 2020 compared to the year 2008.

That target is not in reach. Nowhere near.

Perhaps the Great Recession offered an acceptable excuse for putting this ambition on the backburner. But what about now? Surely all those new jobs will bring vast improvements for Europe’s poor.  But will they?

The idea that – to use a ubiquitous political slogan – “the best protection against poverty is a job” remains the mantra in the corridors of power right across Europe and indeed in Brussels. It is, alas, more tenet of faith than a statement of fact.

Of course, there is understandable intuitive appeal to the notion that job growth reduces poverty. People with jobs are far less likely to live in poverty than people who do not have jobs. If there are more jobs and poor people take them up, then surely poverty must go down?

Unfortunately, things are not as simple. Employment growth never yielded the hoped-for reductions in poverty in the past (see here). There is no reason to expect that things will turn out any different this time.

Remember that prior to the Great Recession job growth was strong everywhere in the EU. Yet few countries saw dramatic drops in poverty. In more than one instance poverty went up.

Two big reasons why jobs are not enough

First, many of the poor live in households where no adult has a job. Such “jobless households” often face severe financial hardship, including any children. In the past, employment growth never produced anywhere near commensurate drops in household jobless rates. Instead it tended to boost the number of double- or multi-earner households. As a consequence, job growth has tended to result in rising living standards around and above the middle, but not in the lower segments of the distribution, increasing the gap between the poor and the rest.

Figure: More people in work does not mean fewer people in poverty 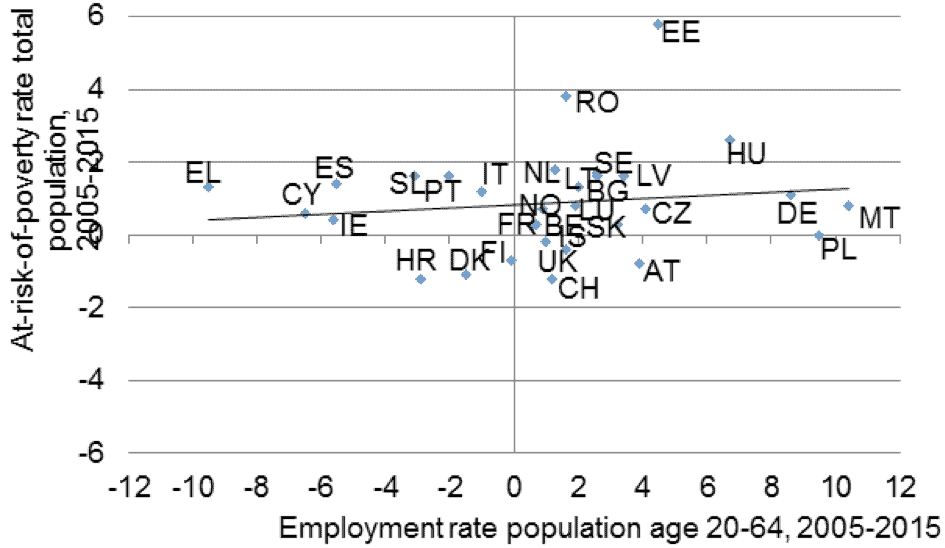 A second reason why more people in work does not automatically bring less poverty is that getting a job may not be enough for a household to escape poverty. Long considered a typically American phenomenon, there is now ample evidence that the “working poor” are to be found in significant numbers in every European country. There is an important overlap with child poverty. In some European countries, about half of children growing up in poverty have at least one working parent.

What does all this mean? It means that there is no room for complacency. There are no excuses for inaction, if the goal of reducing poverty is to be taken for real.

Of course, jobs are important. People do have better chances for progressing in life when they have jobs, even if they see little immediate improvement in living standards.

That said, while efforts to move people into jobs is crucial, the reality is also that many of them will not. That is my core message. The past has taught us that is not the poor who benefit most from economic expansions and buoyant job markets – it is the already well-off.

Moreover, and at the same time, there is a need to expand income support to working households. The core of the working poor in Europe are single person households with dependent children (see here).

Maintaining minimum wages at levels at which they do not harm employment is important but there are limits to what can be expected here. Minimum wages have become inherently constrained in securing decent living standards for sole earners in an era in which dual earner living standards set the tone.

For low-earning households, only direct household income supplements can offer a reasonable prospect to a poverty-free existence, especially when there are dependent children. One option is Anglo-Saxon-type “tax credits” which support households on low earnings through the personal tax system (see here). But these are not easy to implement everywhere, especially now that countries are moving away from joint taxation. Also, in order to be effective as an anti-poverty device and remain affordable, such tax credits need to be strictly targeted. But that implies serious disincentives for beneficiaries to increase working hours, to move to better paid jobs or to bargain for more pay. And tax credits have serious issues of non-take-up and timeliness (see here).

By contrast, more universal income supplements, such as child benefits, can have an immediate impact on poverty among working and non-working parents alike without adversely affecting employment incentives. But for such benefits to be effective as an anti-poverty device they need to be substantial, which inevitably comes at a cost. A good compromise could be to have universal child benefits as a first layer of income support and to put in place supplements for specific segments at particularly high risk of poverty, e.g. lone parents.

In conclusion: it is time to remind Europe’s politicians of the promises they made to bring poverty down. They seem to think that Europe’s buoyant labour markets will do the job. They will not. It is time for politicians themselves to get down to some meaningful work if they take their own promises seriously. 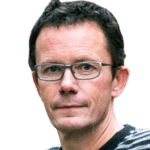 Ive Marx is director of the Centre for Social Policy Herman Deleeck and professor of social policy at the University of Antwerp.