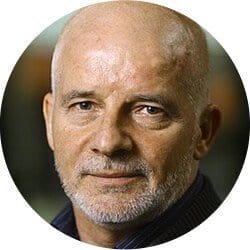 Do you still remember the story about the New Machine Age? Figure 1 (below) can help you stop dreaming: Growth rates of labour productivity (i.e. value added per working hour) in the US, Japan and Europe have never since 1945 been as low as during the past ten years! Remember that value added is identical to National Income that can be distributed between labour, capital and government. The productivity crisis will hence put pressure on wages and/or on profits and/or on government revenues, which is not a good message against the background of demographic change. 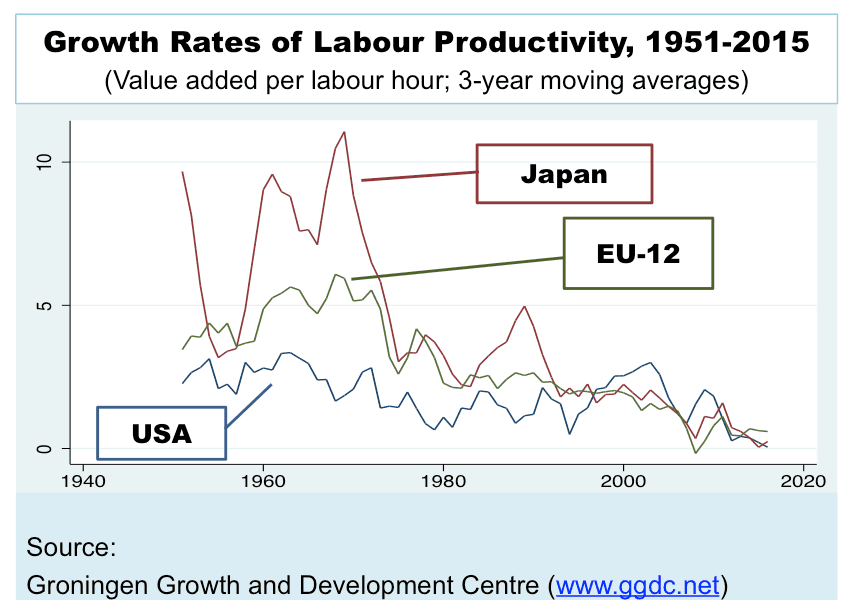 Searching for explanations of the productivity slump, we should address the powerful plea of supply-side economists in favour of deregulation of labour markets through structural reforms. Insofar as such structural reforms have taken place, they have changed the power balance between capital and labour. The consequences are sluggish wages and precarious jobs. We have argued elsewhere that sluggish wage growth impedes the diffusion of labour-saving technology. And the effects are substantial: On average over 19 OECD countries and 44 years, we find that a one-percent wage increase (decline) leads to an 0.32 – 0.49 percent increase (decline) in value added per labour hour.

Moreover, making labour markets more flexible and ‘dynamic’ (e. g. by easier firing) results unavoidably in higher labour turnover. The latter hampers the working of what we call the ‘Schumpeter II’ innovation model, also referred to as the ‘creative accumulation’ (or the ‘routine’) model of innovation. The Schumpeter II model is particularly relevant in the production of knowledge-intensive and complex products and services. ‘Creative accumulation’ means: the long-run accumulation of bits and pieces of knowledge for the continuous improvement of products, processes or systems. Higher personnel turnover makes such knowledge accumulation more difficult, especially if part of the knowledge is firm-specific or ‘tacit’ (i.e. ill-documented, based on personal experience). Moreover, with higher labour turnover, manpower training becomes less attractive and an organization’s historical memory can weaken. Under shorter job tenures, the loyalty and commitment of workers can vanish, resulting e.g. in a quicker leaking of trade secrets and technological knowledge to competitors. Lack of trust and loyalty also increases the need for thicker management bureaucracies for monitoring & control. There are more such arguments of why structural reforms of labour markets are bad for innovation and productivity.

There is one upside, however, to a slower speed in innovation and technology diffusion: it’s good for employment. With lower numbers of robots, you need more personnel. In other words, neoclassical theory is right: The mix of deregulation of labour markets and moderation of wage claims leads to more jobs. An example is the German Hartz reforms (2003-5). After their completion, job growth (especially of precarious jobs) went better than before, but growth rates of German labour productivity were reduced by more than half.

From a Walrasian perspective, you can make strong pleas for structural reforms of labour markets. Only, from a Schumpeterian innovation perspective these pleas are deadly wrong. What is good in a Walrasian view (‘how to allocate scarce resources efficiently?’) is often counterproductive from a Schumpeterian view (‘how to make resources less scarce through innovation?’). Walrasian thinking is still dominant in economic policy advice. Unfortunately, the (post-) Keynesian challengers of neoclassical orthodoxy show little or no interest in innovation theory. This is one more reason why I expect that the pattern in Figure 1 is likely to occupy our attention for many years to come. 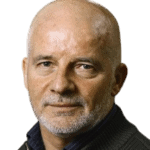 Alfred Kleinknecht is emeritus professor of economics at TU Delft and visiting professor in the School of Economics, Kwansei Gakuin University, Nishinomiya, Japan.