With the repeal of the 8th amendment Irish women and their partners will have a choice if and when to have children later this year. This choice will have major implications for social policy and the development of a family-friendly welfare state in Ireland. From my own experience Irish people are extremely child-friendly but Ireland as a country offers little support to families. It will be the first time that women will make these choices on this island, so services and income protection will have to be attractive for families.

While the marriage equality referendum came cheap with no effect on social spending, family services will require substantial public commitments. Right after the referendum this was also acknowledged by the Taoiseach, Leo Varadkar, when he promised “to make Ireland a better place to raise a family”. This is a major challenge: Families are largely left alone and receive little public support.

But how does Ireland fare compared to similar advanced economies on public support or families?

Ireland has relatively high public spending on family benefits, but mainly in cash transfers such as child benefit and lone parent payments. In contrast, spending on services is relatively low. For instance, public spending on childcare is at 0.5 percent of GDP. Ireland would have to spend three times more to catch up to front-runners like Sweden or Denmark. And not to mention lack of public investment in other basic social services such as housing and health that are crucial for a happy family life.

What are the effects of these spending patterns on families?

Ireland has, despite significant cash transfers, a very high child poverty rate at 27 percent, belonging to the bottom third in the EU on this indicator. On average enrolment rates in formal childcare almost achieve the European target of one-third but these are highly stratified. Children from a poor and disadvantaged background have less access to childcare, depriving them of educational and social opportunities for their entire life.

Moreover, Irish families are faced with one of the highest childcare costs in Europe. The fees for two children attending full-time childcare are at about 50% of gross average wage. After taxes and expenses for work, working women hardly break even on average wages. For lower income earners and in particular lone parents, work without childcare subsidies is a net loss.

Related to these high childcare costs, the maternal employment rate in Ireland is low. For women, it is a choice between continuing a career or being a mother. Compared to continental neighbours like Denmark or Germany, about 20 or 10 percent of mothers drop out of the labour market, respectively. The only silver lining is that compared to Germany a relative high share engages in full-time work. 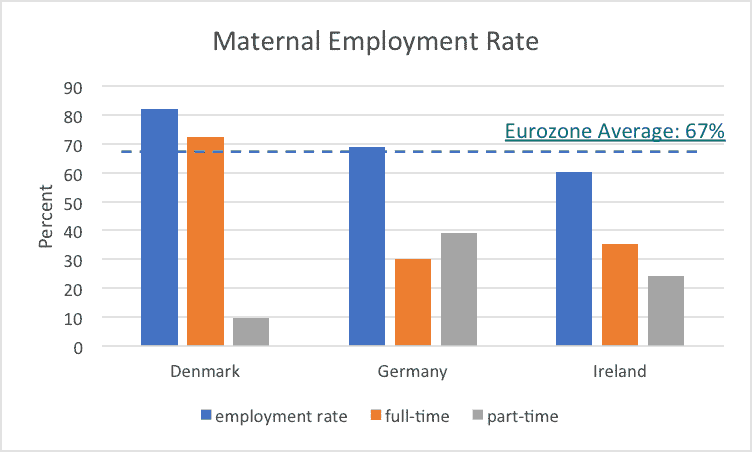 Finally, fathers have little opportunities to be involved in child rearing. With the introduction of paternity benefit in 2016, we see now about 50% of new fathers taking leave. Yet, it also means the other half continuing to work in a crucial period of family formation. Low statutory wage replacement rates make it hard for fathers to take leave, when the family depends on their income as we know from the low maternal employment rates. Moreover, parental leave is limited to two weeks, whereas other countries like Germany offer two months at two-thirds of previous salary solely reserved for fathers.

Back in 2012, when Ireland had no paid paternity or parental leave, already 30 percent of respondents said that leave should be evenly split between parents. Again, an indication that attitudes in Ireland are much more modern than the institutions and politicians that govern such family choices. The abortion referendum has revealed that attitudes in modern Ireland seem socially much more progressive than the dominant parties and their policies would suggest. Germany showed how a centre-right party like the CDU could introduce a major expansion of parental leave and childcare provision within a decade. Ireland’s political system is dominated by centre-right parties and conservative policy development (including Sinn Fein despite its much more liberal rhetoric). Yet, a progressive family policy agenda has held Angela Merkel in government for more than a decade and could be a model for Varadkar and his Fine Gael party.

Real choices for mothers and their partners requires a social investment state that supports families throughout their life course. Ireland has to invest much more in services, but also put more into benefits at key life stages, otherwise women will face these hard decisions between founding a family and continuing their career. Moreover, women don’t want to raise their children alone, they want supportive fathers and not only for two weeks. In essence, Ireland requires a New Deal for Families to make it a society that truly welcomes and supports families.