Today’s profits are not tomorrow’s investments

A picture can say more than a thousand words. This is certainly true for the set of graphs (see below) that the OECD published in its latest Economic Outlook and that show the rate of return on fixed assets – a proxy measure for the rate of profitability on capital investment.

A quick glance reveals high rates of return in OECD countries. Indeed, across the body as a whole, the rate of return on fixed assets is back at its pre-crisis level and as high as 10 percent. While in the US and the UK the rate is higher (12 percent), Germany and the Netherlands have hit record highs of 13 to 14 percent profitability. Moreover, these rates only reflect returns before any financial leverage effect operates when companies take out loans and pay a lower interest rate cost than the return on assets. This indeed implies that returns on equity would be even higher and a multiple of the returns shown below. 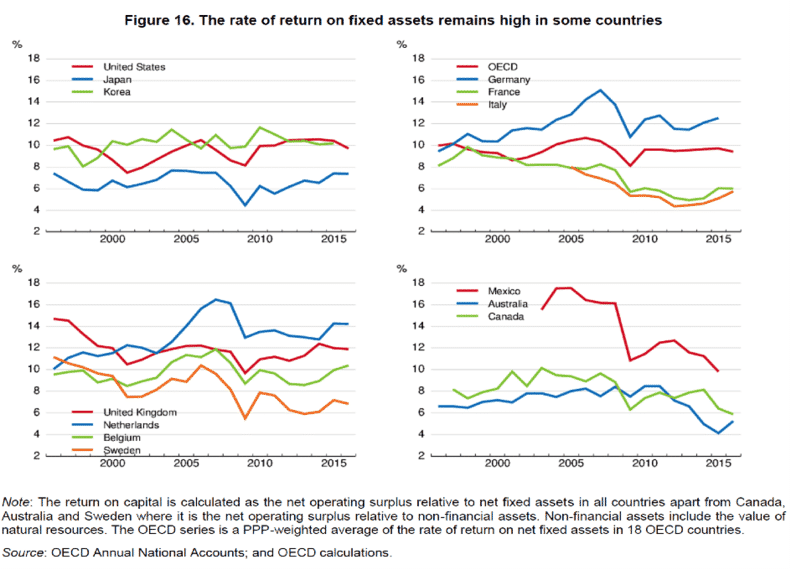 With returns on investment this high and the return on risk-free financial investment at historic lows, business investment should be booming as management can realise a much higher return on investment compared to the financial cost of such investment. This, however, is not the case. According to the OECD Outlook, investment spending in 2018-2019 is expected to be around 12 percent below the level required for capital stock to rise at the same pace as in the decade prior to the crisis. Firms are not making the marginal but profitable investments that low interest rates should encourage. Interestingly, the OECD refers here to sticky corporate hurdle rates that are as high as 14-15 percent as an explanation. In other words, management, when deciding to invest or not, still requires high and rigid nominal profitability thresholds, even though the cost of finance or alternative risk free investment has gone down substantially. In fact, the OECD takes this argument one step further by claiming that corporations, particularly in the US, are using their profits and resources to merge with or acquire competing companies instead of adding new capital to the aggregate stock.

All of this brings into question the validity of a traditional structural reform agenda that showers business with all sorts of incentives and “treats” in the hope that investment and jobs will follow in return. An alternative narrative for economic policy is necessary, some of whose contours are sketched out below.

First, one implication is that the role of fiscal policy in reviving aggregate demand in a downturn becomes even more important. Monetary policy does not just ‘push on a string’ when interest rates are hitting the zero nominal bound. The existence of corporate hurdle rates in the form of high and rigid profitability requirements means that monetary policy is always ineffective in injecting new demand, because the business investment channel is not working as it should. In downturns, monetary policy should therefore not be the ‘only game in town’. Fiscal policy needs to be used to directly support the economy by expanding public investment. This in turn implies that, especially in downturns, fiscal policy should not be restrained by all sorts of rigid rules. It also underlines the necessity of having a ‘golden rule’ that allows public investment to be debt-financed.

International economic institutions such as the IMF, the European Commission and the OECD tend to share the view that technology is driving the trend decline of the share of labour in total national income. This is because robots, automation and ICT are making the production of goods and services more capital-intensive. As more capital is being used, the share of profits has to go up (and the share of labour has to go down) in order to maintain profitability rates at an appropriate level. In this way, the distribution of income between labour and capital is cast as a technological issue – far from a political economy agenda calling for strengthening of trade unions and collective bargaining.

The data produced by the OECD allow us to refute the dominance of this technological view. With return rates not reacting to the trend decline in nominal interest rates, and in some cases even increasing, the decline in labour share has gone much further than would be warranted by technology making production more capital-intensive. This conclusion is also backed up by recent research from the University of Greenwich, finding that the weakening of union density and/or collective bargaining coverage is a more important factor in explaining the trend decline of the labour share than technology.

While the current OECD Economic Outlook does not fall into this trap – indeed it actually advocates useful reforms that benefit both workers and business such as investing in education, skills and public infrastructure – others could take the – perverse – view that more business investment should be obtained by lifting return rates over existing corporate hurdles of 14 to 15 percent. This would imply pursuing the old agenda of structural reforms of more labour market flexibility, more deregulation, more weakening of the bargaining position of workers.

Doing so would not only magnify inequalities (see below), but would also be self-defeating. Corporate hurdle rates, while downward rigid, are likely to be upward flexible, especially if finance and shareholder value dominate the economy. Once financial markets in general, and investment fund managers in particular, realise that structural reforms have made it easy to achieve profit rates higher than 15 percent, they will in all likelihood adjust their expectations and push company managers to deliver these higher returns.. In this way, financial market forces create a kind of level playing field, not to protect workers from downwards wage competition, but to impose even high and rising return rates on investment across the entire economy. In the end, investment performance will continue to disappoint while the distribution between capital and labour and between the top incomes and the rest will deteriorate.

“Capital in the 21st Century”

Perhaps surprisingly, the OECD’s estimates on the rates of return on investment provide support for the central claim made by Piketty in “Capital in the 21st Century”. Picketty argues that inherited wealth will always rise faster than earned wealth in an economy where the rate of return on capital is systematically higher than GDP-growth. In such an economy, wealth will become concentrated to levels that are incompatible with social justice and democracy. Moreover, inequality then becomes self-generating as the high concentration of income and wealth allows the richest in society to capture policy and regulatory processes and so obtain an even higher share of national income. By reporting rates of return on fixed assets as high as 14 percent in the Netherlands, 12 percent in Germany, the US and the UK and 10 percent on average in advanced economies, the OECD is testifying to the existence of this structural and powerful inequality-generating mechanism.

Finally, the OECD’s analysis of high rates of return, corporate hurdle rates, and insufficiently dynamic business investment lends support to the case for an economic policy with aggregate demand and economic growth fuelled by rising wages. Instead of showering business with financial resources, which are not used to expand productive capacity, and then offsetting the resulting aggregate demand deficit by engaging in new waves of private or public debt, economic policy needs to stage a wage-led recovery. By rebalancing the bargaining power of labour versus business (see here from The Economist), and this in combination with financial market and corporate governance reforms aimed at long-term business models instead of short-term profits, income can be transferred back to workers. Business may then register profits that are lower than current record levels. However, with more demand coming from households, business will be forced to invest in expanded production capacity. This scenario of a wage-led recovery would be a ‘win-win’ situation as it combines stronger demand and growth in the short-run, higher production capacity and growth potential in the medium and long-run, with lower inequalities.