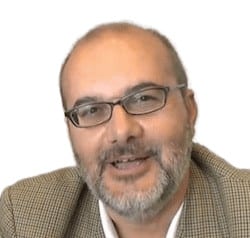 Recent discussions about the “advent of robots” have some rather unusual features. The threat of robots replacing humans is seen as something truly novel, possibly changing our civilization and way of life. But in reality this is nothing new. Introduction of machinery to replace repetitive (or even more creative) labor has been applied on a significant scale since  the beginning of the Industrial Revolution. Robots are not different from any other machine.

The obsession with, or fear of, robots has to do, I believe, with our fascination with their anthropomorphism. Some people speak of great profits reaped by “owners of robots”, as if these owners of robots were slaveholders. But there are no owners of robots: there are only companies that invest and implement these technological innovations and indeed they will reap the benefits. It could happen that the distribution of net product will shift even more toward capital, but again this is not different from the introduction of new machines that substitute labor—a thing which has been with us for at least two centuries.

The first is the fallacy of the lump of labor doctrine that holds that the new machines  will displace huge numbers of workers and people will remain jobless forever. Yes, the shorter our time-horizon, the more that proposition seems reasonable. Because in the short-term the number of jobs is limited and if more jobs are done by machines fewer jobs will be left for people. But as soon as we extend our gaze toward longer-time horizons, the number of jobs becomes variable. We cannot pinpoint what they would be (because we do not know what new technologies will bring) but this is where the experience of two centuries of technological progress becomes useful.  We know that similar fears have always existed and were never justified. New technologies ended up creating enough new jobs, and actually more and better jobs, than were lost. This does not mean that there would no losers. There will be workers replaced by the new machines (called “robots”) or people whose wages will be reduced. But, while these losses may be sad and tragic for the individuals involved, they do not change the entire society.

Even the best among the economists, like Ricardo and Keynes (in “The economic prospects of our grandchildren”) thought that human needs are limited. We should know better today: the needs are unlimited and because we cannot forecast the exact movements in technology, we cannot forecast what particular form such new needs will take. But we know that our needs are not finite.

The third “lump” fallacy (which is not directly related to the issue of robotics) is the lump of raw materials and energy fallacy, the so called “carriage capacity of the Earth”. There are of course geological limits to raw materials simply because the Earth is a limited system. But our experience teaches us that these limits are much wider than we generally think at any point in time because our knowledge of what earth contains is itself limited by our level of technology. The better our technology, the more reserves of everything we discover. Yet accepting that X is an exhaustible energy source or a raw material and that at the current rate of utilization it will run out in Y years is only a part of the story. It neglects the fact that with the rising scarcity and price of X, there will be greater incentive to create substitutes (as inventions of sugar beet, synthetic rubber or fracking show) or to use a different combination of inputs to produce the final goods that now use X.  Indeed, the cost of the final good may go up but here again we are talking about a change in some relative prices, not about the a  cataclysmic event. Earth carriage capacity which does not include development of technology and pricing in its equation is just another “lump” fallacy.

Some famous economists like Jevons who collected tons of paper in the expectation that the trees would run out entertained the same illogical fears. Not only did it turn out that, with many thousand (or million?) times greater use of paper, the world did not run out of trees—Jevons simply, and understandably, could not imagine that technology would enable recycling of paper and that electronic communications would substitute for much of what paper was used for. We are not smarter than Jevons because we too cannot imagine what might replace fuel oil or magnesium or iron ore, but we should be able to understand the process whereby these substitutions come about and to reason by analogy.

Fears of robotics and technology respond, I think, to two human frailties. One is cognitive: we do not know what the future technological change will be and thus cannot tell what our future needs will be.  The second is psychological: our desire to get a thrill from the fear of the unknown, from that scary and yet alluring prospect of metallic robots replacing workers in factory halls. It responds to the same need that makes us go and watch scary movies. When we do not go to a movie theater we like to scare ourselves with the exhaustion of natural resources, limits to growth and replacement of people by robots. It may be a fun thing to do but history teaches us that this is not something  we should rationally fear.

This article originally appeared on the author’s blog. This contribution is part of our project on the future of work and the digital revolution.