Will Michel Barnier save Theresa May’s bacon and will historians look back on a wasted three months soon after the UK’s June 2016 Referendum?

Catherine Barnard, Professor of EU Law at the University of Cambridge and a Senior Fellow of UK in a Changing Europe, tells the Cambridge Public Policy SRI (Strategic Research Initiative) what she thinks of the UK government’s Chequers Deal.

The SRI and the CBR, the Centre for Business Research, University of Cambridge, are holding a conference in November on Brexit with the aim of encouraging interdisciplinary discussion amongst academics and further research on the implications of the UK leaving the EU for public policy.

This is the first of a series of podcasts the SRI Public Policy has commissioned with key speakers involved in the Cambridge event.

In this 25 minute audio podcast Professor Barnard discusses the background to the Chequers deal and what agreement she believes will eventually be reached.

Barnard outlines how the Chequers deal was conceived, what the key negotiating points are, including the Northern Ireland back stop arrangement, why the EU 27 have stuck fast to their proposals and why she thinks Michel Barnier, the EU’s chief negotiator, will eventually save Theresa May’s bacon by making some concessions to allow the UK to leave the EU on the 29th March 2019 (Brexit day), but fudging some of the key issues in the political declaration which will form the basis of the future deal after we leave. 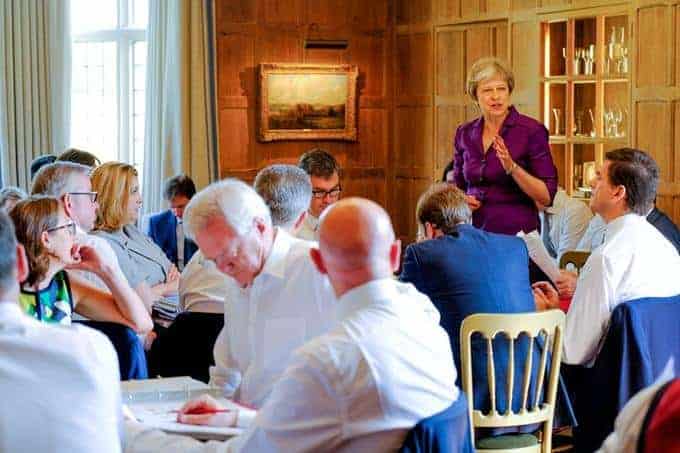 Barnard also comments on how she thinks political historians will judge the UK’s two years’ of negotiations and why she believes that a critical time was lost from July 2016 to October 2016 when Theresa May could have brought the country together but failed to do so.

Barnard explains: “I think historians of the future will look back with a degree of amazment at this period of time. How could a country that prided itself on having a very strong functioning civil service with a history of pragmatism and international relations experience have mishandled this so badly. Why do I say that? I think that the most damning indictment of what has happened in the 18 months since the withdrawal (leave) notice was triggered was that there was a window for Theresa May between July 2016 and the Party Conference Speech she gave in October 2016. In that window she could have taken the opportunity to think ‘how am I going to try and bring the country together’, on a vote that was so close on an issue that was of such fundamental importance? What could have happened in that time is that she could have set up some form of Royal Commission, or an advisory Cabinet of all the talents to work out the most sensible way forward.

“What is so remarkable is that our first attempt to put the UK’s position on the table in respect of the future deal didn’t come out until July 2018. Given that you only have two years in this process once article 50 was triggered the question was: what was going on in the previous 18 months? Now, in the scheme of history, 18 months is merely a pin prick but when you only have a two-year time scale [to deliver Brexit], to have lost so much time over in-fighting and over actually a deep dive learn into what the EU is really all about, historians will say: what on earth was the UK doing in that precious period.”

She points out: “The UK civil service is smaller than at any time since the war. It has taken a significant cut and lost a huge amount of talent in the last five years, as part of the austerity measures, and it is now having to expand rapidly to take on a lot of the jobs that the EU had done in the past.

“What is so striking is that it is the EU’s negotiating team, Taskforce 50, which has really led the way. It is Taskforce 50 that has come up with the draft Withdrawal Agreement, we expect it also has a draft political declaration in its back pocket as well, and the UK has been responding to that rather than actually setting the agenda itself with its own text of what the Article 50 [deal] might look like. Many people are critical of the EU too and say it is demonstrating a lot of inflexibility but Michel Barnier, the lead negotiator, has his hands tied by the EU mandate that was given to him by the European Council and the Council of Ministers. He therefore doesn’t really have that much flexibility.

“What is striking is that in the news recently it is said that the EU Council meeting at Salzburg is going to loosen those ties somewhat to give Barnier a bit more flexibility to try to come up with some sort of solution, at least on the Article 50 Withdrawal Agreement, to help Theresa May get over the line of the 29th March 2019. Then, maybe, if the Brexiteers see we have formally left the EU they will become less on edge about what is happening and a bit more constructive about what the future relationship may look like.“

Barnard continues that she doesn’t think Article 50 could be extended, as some commentators have suggested, because of the forthcoming European elections, and that she felt voters, politicians and academics now knew far more about the EU than when the June 2016 Referendum was conducted, when there was a vote to leave by a narrow margin of 48 to 52 per cent.

Barnard explains: “The politics are so against extending Article 50, people are expecting us to leave, it would be unacceptable to many leavers and deeply problematic to the EU, because of the EU parliament elections and the UK seats probably will have been allocated elsewhere.”

She ends: “There will be concessions on both sides, but if it’s seen there are not just concessions from the UK but also concessions from the EU, it will be an easier message for Theresa May to sell to Parliament. It maybe the EU will try to save Theresa May’s bacon and that some of the ideas from Chequers will be built into the political declaration which will form the basis of the future deal which will be negotiated after we leave on 29th March 2019.”

Catherine Barnard is Professor in European Union Law and Employment Law at the University of Cambridge, and Senior Tutor and Fellow of Trinity College. She specialises in EU law, employment law and discrimination law.