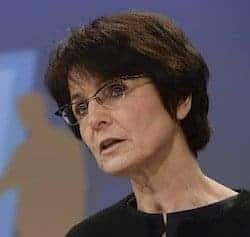 In 2012, the Four Presidents Report mentioned a European unemployment insurance as a possible mechanism to achieve greater fiscal stability at the EU-level. What do you think about that?

In his political guidelines, President Juncker stated that he wants a deeper and fairer Economic and Monetary Union (EMU). The Commission’s Blueprint for a Deep and Genuine Economic and Monetary Union and the Communication on the Social Dimension of the EMU state that, in the long term, an autonomous Euro area budget could be foreseen, providing fiscal capacity with a stabilisation function to support adjustment to asymmetric shocks, shocks that impact on regions differently.

This Commission will continue to reform the EMU. Enhancing the convergence of economic, fiscal and labour market policies between Member States is the key answer to many problems.

Mr Juncker will report on this matter to the European Council in June of this year. Our Work Programme for 2015 also announced that the Commission will present legislative and non-legislative initiatives in the course of this year.

Why have so few funds of the youth guarantee been released to date? What do you think works well, what needs to be improved?

For me, it is really unacceptable that today almost every fourth young person on the labour market cannot find a job. Despite being the generation with the highest education attainment ever, today’s young have paid the highest price for the crisis. The Youth Employment Initiative (YEI) was adopted to address these unprecedented levels of youth unemployment, with some regions of the European Union facing a particularly difficult situation. Promoting youth employment is definitely one of my highest priorities.

In 2014 most Member States received country-specific recommendations on further reforms needed to implement the Youth Guarantee and to improve the functioning of their labour markets.

The European Union actively supports Member States in implementing the Youth Guarantee. With regard to EU financial support, the Youth Employment Initiative, with a budget of 6.4 billion euros for the next few years, and the European Social Fund, are of key importance.

These instruments will not be sufficient to fully roll out the Guarantee schemes but they provide important support, which has to be used swiftly and to the best possible result.

So far, the Commission has undertaken a number of steps to support Member States in the programming and implementation of the Youth Employment Initiative, including frontloading the initiative. In addition, the Commission intends to launch – very soon – an additional proposal to increase pre-financing payments to Member States under the YEI. This measure is intended to address difficulties some Member States may have to implement the YEI on the ground due to lack of liquidity. I am determined to speed up the implementation of the YEI and to make this work.

Labour mobility within the EU is hotly debated at the moment in many member states. What is your view on this issue?

The Commission announced that it will present towards the end of 2015 a mobility package, focussing on the social security coordination and on the posting of workers.

The overall aim is to contribute to more efficient and fairer labour mobility. I am deeply convinced that labour mobility is an opportunity, not a threat. Free movement of workers and of services is a pillar of the internal market and we need to continue facilitating it. The internal market has for decades contributed to growth and jobs across the EU – in East and West, in North and South. All Member States stand to gain from it. We should not give up on the internal market now that we need it more than ever to get our economy back on track.

However, we cannot turn a blind eye on problems. The internal market must be fair and must be perceived as fair. This is why we need to analyse and report objectively on mobility flows and their consequences on national labour markets and social security systems, both in sending and receiving countries. We need a correct picture of the situation, based on facts and figures.

We also want to support public authorities in preventing errors, abuse and fraud. A timely and quality transposition of the newly adopted Enforcement Directive on Posting is crucial and we will continue to work intensely with the Member States in this regard. The proposed EU Platform to fight undeclared labour will help to avoid social security fraud. It is even not excluded that we need to go beyond enforcement and also take another close look at some key provisions of the existing rules. We may have to adjust or update them.

What are your key priorities for your term in office?

My top priority is to contribute to the Commission’s commitment to put Europe back on the path of sustainable job creation and economic growth. The new investment plan presented by President Juncker, aiming to mobilise over € 315 billion of additional public and private investment over the next three years pursues these very objectives. As recommended in the Annual Growth Survey for 2015, our economic and social policy should be based on boosting investment, advancing structural reforms and pursuing fiscal responsibility.

The employment and social situation continues to be a serious concern. In order to reverse the high levels of unemployment, my goal is to focus on people’s skills and to promote apprenticeships and entrepreneurships, with a particular attention to the long-term unemployed and young people.

For the latter, the implementation of the Youth Guarantee continues to be a top priority to facilitate school-to-work transitions. Labour mobility across the Single Market can also help tackle the current imbalances in unemployment levels among Member States. The objective is to develop a dynamic and integrated EU labour market, instead of 28 diverging ones, while preventing abuses and distortions.

Finally, we need to keep working to reduce the rising trends in poverty and social exclusion. Social protection has a key role to play and therefore we need to continue modernising our social security systems to make them more effective and efficient.

Marianne Thyssen is a Belgian Politician and Commissioner for Employment, Social Affairs, Skills and Labour Mobility in the Juncker Commission.