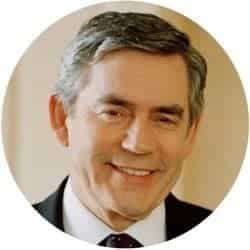 Just days ago, Abdul al-Kader, his four-year-old daughter, Abdelillah, draped over his shoulders, was photographed standing at a dangerous intersection in Beirut, trying to sell biro pens to feed his family. The image of this Syrian refugee family’s plight, tweeted by a Norwegian, Gissur Simonarson, immediately went viral.

Within a day or two, £100,000 ($154,000) was raised to help Abdul, Abdelillah, and her nine-year-old sister, Reem. When asked what he would do with the money, Abdul said he would use it to educate his children and their friends.

The story of Abdul and his children highlights an obvious, if overlooked, truth: Far from seeking to scrounge off Europe, thousands of Syrian exiles are desperate to return home as soon as it is safe. It is sheer desperation that is forcing them to embark on life-threatening voyages.

And they are not alone. An astonishing 30 million children are displaced around the world: two-thirds to other parts of their countries, and the rest forced to flee from their homelands altogether.

Some refugees are victims of natural disasters – for example, the one million children recently made homeless by the earthquake in Nepal. Others are displaced by climate change. But the main reason for the rising number of refugees is violent conflict. Five years ago, war and fighting displaced roughly 5,000 children per day; today, that number is more than 20,000.

Aside from Afghanistan since the 1970s, Somalia since the 1980s, the Democratic Republic of Congo since the 1990s, and now Syria, the past year alone has seen refugees fleeing the Central African Republic, South Sudan, Iraq, Libya, Yemen, and Burundi. And, because the average time a refugee is away from his or her homeland is ten years, millions of refugee children could go without education for most of their childhood years.

That scenario – life on the streets, with some children trapped in slave-labor conditions, others trafficked for prostitution or forced into unwanted marriages, and all vulnerable to extremists who seek to exploit their suffering – is so unacceptable that it forces us to act. While food, medicine, and shelter come first, education must be a high priority.

I found that out a few weeks ago while visiting a refugee center in Beirut, where mothers pleaded with me to get their children into school. They understood that while nutrition and health care are vital to survival, education – which enables young people to prepare and plan for the future – is what gives them hope.

Yet, despite the efforts of international agencies, these vulnerable children will continue to fall through the cracks unless drastic action is taken now. Refugee children lose out because they benefit mainly from humanitarian aid, which maintains a short-term focus on shelter and food, and development aid, which is by its very nature long-term. Only 2% of humanitarian aid currently goes to schools, and aid agencies struggle to cope with emergencies.

To address this, plans are underway for a humanitarian fund that can provide money to keep schools operating through an emergency or to build new ones in refugee camps and settlements. Indeed, the real test for such a fund is in countries such as Jordan, Lebanon, and Turkey, where services are at a breaking point and some two million children – the majority with no schooling – are languishing in shacks, tents, huts, and squalid camps.

Last week, the Global Business Coalition for Education and the charity Theirworld outlined a way forward that is economical and can be implemented immediately. The plan is simple: double shifts in existing schools, with local children attending during the first half of the day, and refugee children attending during the second half. The plan could ensure that one million refugee children are not condemned to lose their chance at an education.

Over the past year, thanks to international donors around the world and a determined education minister, Elias Bou Saab, 106,000 refugee children in Lebanon have been enrolled under a double-shift system. Starting with the new autumn term, the total is set to rise to 140,000.

But the funding for this year is $30 million short – and 60,000 of the students cannot be accommodated. And then there are the 300,000 children in Lebanon alone whose education needs remain to be met.

Normally in an emergency, there are no facilities, buildings, or staff to keep children in school. What is missing in Jordan, Lebanon, and Turkey, however, are not classrooms or trained teachers – there are plenty locally and among adult Syrian refugees – but the money to pay for them.

The sums are not large relative to the scale of the problem. For just over $500 a year, or $10 per child per week, we can provide school places that would allow parents and children to do what they would prefer to do – be educated in the region.

Later this month in New York, I will ask the international community – old donors and potential new donors alike – to add another $250 million to the $100 million that we have already raised for Lebanon. If an impoverished refugee father is willing to give all he has to help children go to school, surely $10 dollars a week is not too much for the international community to offer to keep a refugee child off the streets.