In 2012, I became rapporteur of a directive aimed at addressing the under-representation of women on boards among European Union member states. It was a proposal to create a level playing-field.

Since then, numerous attempts, mostly by social-democratic governments, failed however to persuade a majority among member states to go ahead. The main reason? The German conservatives and liberals did not want a European rule.

After the arrival of the Ampelkoalition in Germany in December 2021, we tried again and worked closely with the French presidency of the Council of the EU to secure a council majority. This was achieved in March. After intensive negotiations, the co-legislators, the European Parliament and the council, reached a preliminary agreement on the directive in June.

After some back and forth with the liberals in the German coalition, support held and a majority in council was reached in the middle of this month. Now the last step is approval by the parliament—which I am sure will come by the end of November.

It is thanks to the Socialists and Democrats that the directive has not been put aside. Many moves were made to drop it, since it was deemed too difficult to ever win a majority among the member states. Perseverance on the part of many (mostly female) colleagues and myself proved necessary. I am proud to say: we did it!

Yet some might ask: why keep fighting for a rule focused only on the top-notch jobs in our societies? There are many reasons but equal chances for all, from the ground up, are only possible if we break the glass ceiling.

And the gap remains. In the EU, fewer than one in ten chief executives and board chairs are female (8.5 per cent and 7.8 per cent respectively in October 2021). Women make up only about one-fifth (20.2 per cent) of senior executives.

Why is it then important to close this gender gap in top management? It is widely recognised that the presence of women in management improves corporate governance by enhancing team performance and the quality of decision-making, through a more diverse and collective mindset incorporating a broader range of perspectives. Companies do better. To ignore this would not only be short-sighted—it would be bad management.

The ‘women on boards’ directive will address the quality of board members—executive and non-executive—of listed companies. At its heart lies the process of selection. If the process is flawed, the best qualified candidates will not be shortlisted—to the detriment of the company as well as the candidates. This is why the directive focuses on transparency and qualification in selection.

Where candidates have equal qualifications, the candidate of the under-represented gender—in most cases women—must be selected to meet the target of 40 per cent of non-executive board members or 33 per cent of non-executive and executive board members combined. (So if a company happened to have 65 per cent women already, a man would have to be hired since he would be of the under-represented sex.)

We shall check if these targets are achieved throughout the EU by June 2026, via reporting and ‘effective, proportionate and dissuasive’ penalties. The data show clearly that binding measures are imperative for such legislation to be effective.

Of course more women in decision-making positions is only one of many measures which need to be taken to achieve gender equality in the workplace. This directive opens a door—a door to better companies, where the selection of decision-makers is based on competence and transparency and where the toxic features of internal corporate culture are addressed top-down. Again, the data show that this actually works once the management level is diverse.

This is, however, only the first and already very heavy door on to these important issues—and it has taken a decade to open. Much more needs to be done to achieve a discrimination-free workplace and gender-balanced corporate boards. Pay transparency is currently under negotiation among the European co-legislators (the parliament and the council) and more effective measures against sexual harassment are also on the table. All this will lead to a change in workplace culture, combining top-down and bottom-up approaches.

But for now the women-on-boards directive is a first ‘foot in the door’ for women—and it cannot be slammed against us any more. 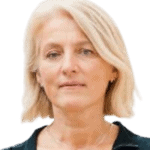