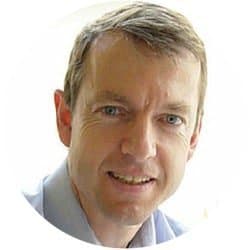 Without anyone quite noticing, Europe’s internal balance of power has been shifting. Germany’s dominant position, which has seemed absolute since the 2008 financial crisis, is gradually weakening – with far-reaching implications for the European Union.

Of course, from a soft-power perspective, the mere fact that people believe Germany is strong bolsters the country’s status and strategic position. But it will not be long before people begin to notice that the main driver of that perception – that Germany’s economy continued to grow, while most other eurozone economies experienced a prolonged recession – represents an exceptional circumstance, one that will soon disappear.

In 12 of the last 20 years, Germany’s growth rate been lower than the average of the other three large eurozone countries (France, Italy, and Spain). Although German growth surged ahead during the post-crisis period, as the graph shows, the International Monetary Fund predicts that it will fall back below that three-country average – and far below the eurozone average, which includes the smaller high-growth countries of Central and Eastern Europe – within five years. 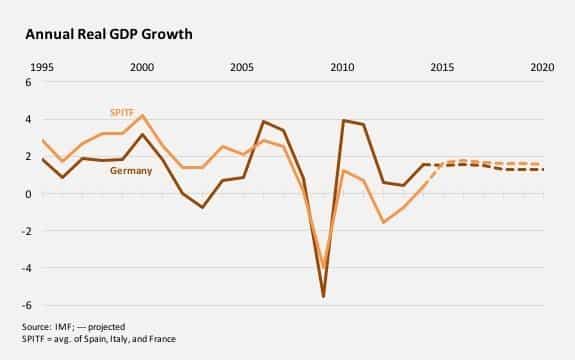 To be sure, Germany still has some apparent advantages. But a closer examination shows that they are not quite as positive as they seem.

For starters, Germany is close to full employment – in sharp contrast to the double-digit unemployment rates that prevail in much of the eurozone. But the combination of full employment and low growth rates actually points to an underlying problem: very slow productivity growth. Add to that a shrinking pool of workers capable of meeting the needs of Germany’s labor market – the country’s population is aging, and the arriving refugees lack the needed skills – and the German economy seems set for a protracted period of sluggish performance.

Another apparent advantage is Germany’s large financial reserves, which not only cushioned it from the crisis, but also conferred upon it considerable political sway. Indeed, because German funds were indispensable in bailing out the eurozone’s deeply stressed periphery, the country became central to all efforts to address the crisis.

Germany’s consent was needed to create Europe’s “banking union,” which entailed the transfer of supervisory powers to the European Central Bank and the creation of a common fund to resolve failing banks. And German resistance contributed to a delay in the ECB’s intervention in bond markets; when the ECB finally did launch its bond-buying program, it did so with Germany’s tacit approval.

But now that interest rates are at zero, Germany’s large savings are no longer doing it much good. And with the financial storm having largely abated, Germany lacks new opportunities to demonstrate its political clout, both within and outside the eurozone.

Indeed, whereas Germany, owing to its deep involvement in Central and Eastern European economies, was a key player in the Minsk agreements that were meant to end the conflict in Ukraine, it has little influence in the Middle Eastern countries that are occupying the world’s attention today. While many have highlighted Germany’s political leadership in the refugee crisis, the reality is that being thrust into the front line of that crisis, without having much influence over the factors that are driving it, is placing considerable strain on the country. Germany is now, for the first time, in the position of having to ask its EU partners for solidarity, as it cannot absorb all the newcomers alone.

As usual, however, perceptions are lagging behind reality, which means that Germany is still widely viewed as the eurozone’s most powerful force. But, as the global business cycle accelerates Germany’s return to the “old normal,” the power shift within Europe will become increasingly difficult to ignore.

Germany, which exports a large volume of investment goods, benefited more than other eurozone member countries from the investment boom in China and other emerging economies. But emerging-economy growth is now slowing considerably, including in China, where demand is shifting from investment toward consumption. This tends to undermine German growth and benefit southern European countries, which export more consumer goods.

The ongoing shift in Europe’s economic and political power dynamics is likely to have a major impact on the EU’s functioning – and especially that of the eurozone. For example, without a strong Germany to enforce the eurozone’s fiscal strictures and urge the implementation of difficult but necessary structural reforms, countries may lose their motivation to do what is needed to ensure fairness and stability in the long term. If inflation remains low, the ECB might feel freer to pursue further rounds of monetary stimulus, undermining fiscal objectives further.

In short, we may be headed toward a less “Germanic” economic policy in the eurozone. While that might enhance the EU’s popularity in the periphery, it could increase resistance to EU membership in Germany – a country that, despite its waning economic strength, remains an important piece of the integration puzzle.