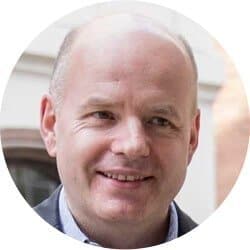 The French journalist Alphonse Karr once observed that we can either complain because rose bushes have thorns or rejoice because thorn bushes have roses. Karr was writing in the mid nineteenth century against a backdrop of industrialisation, revolution and cultural change in Europe, when human progress was both terrifying and exciting in equal measures. The world emerged, eventually, into the light and things took a turn for the better, vindicating, for a time, the optimists. Today, we face a new set of threats, or opportunities, depending on whether you’re a glass half full or half empty kind of person. Globalisation, technological change, demographic transition and climate change are just four of the ‘megatrends’ preoccupying policymakers.

Each of these is daunting on its own. It may be why they tend to be analysed separately; as problems of managing negative externalities, for example, or of upskilling workers to prepare them for the digital age. But a case can also be made that these momentous developments share key features which make them worth studying together as one multifaceted transition – we could call it ‘the future’ – to see if common elements and solutions emerge.

For example, is the switch to a low carbon economy, or a digitalised workplace, say, likely to involve a gentle transition, or sudden tipping point? Can most facets of these transitions be safely left to the market, or is there a role for government in managing change? To what extent is rapidly advancing technology a problem (entailing the mass automation of routine occupations) or a provider of solutions (a means to switch to clean fuels, or tackle labour market bottlenecks caused by shifting demographic patterns)?

Let’s begin with technological change, particularly digitalisation. We know from Schumpeter and others that technology both destroys and creates jobs. Up to now, the race between job creation from new products and job destruction from new processes has worked in favour of expanding wealth and opportunity. Pessimism about the future often stems from our inability to imagine the new industries it will bring and there is no reason to think this time is any different. Cautious optimists therefore point to the role of the state and enlightened employers in investing in training to ensure skills are continually upgraded to match the needs of advancing technologies. Pessimists, though, point out that the demand for ‘routine’ jobs, whether they require brawn or brain, has declined sharply, leading to job polarisation and precarity.

Job precarity is being compounded by our second megatrend – globalisation or, specifically, the application of information technology to the management of global supply chains. By allowing companies to disperse production into separate geographic segments, globalisation obliges national economies to raise their game in order to compete for inclusion in the more lucrative parts of these chains. The upside is cheap and plentiful consumer goods. But the emergence of China as the world’s factory and India as its back office has stripped rich countries of many low-skilled jobs which they struggle to replace.

There are also disquieting signs that global production chains encourage the parallel development of ‘global wealth chains’, or the recycling of profits from multinational businesses through tax havens. The lack of transparency in these havens, coupled with growing ambiguity about where precisely wealth and value are created, makes tax avoidance easier and starves governments of revenues for public services, including the education budgets they need to equip their populations for the new economy.

Globalisation has been consciously fostered by policymakers who are only now becoming fully aware of its downside. Climate change, on the other hand, represents an existential crisis that must be tackled head-on. But the policy challenge is similar – the need to maintain social cohesion in countries managing the transition to sustainability in a way that doesn’t involve a net destruction of jobs.

The ILO estimates that at least half of the global workforce – the equivalent of 1.5 billion people – is affected by the transition to a greener economy. This is not something politicians feel they can ignore, as attested to by Donald Trump’s kept promise to coal-mining states to pull the US out of the Paris climate accords. The exact impact of the Green transition on jobs and the political preferences of those doing these jobs hinges on the composition of growth in the countries undergoing it and their institutions for managing change. Here, technology can be on the side of the optimists if it ensures that the loss of ‘brown’ jobs in polluting industries is outweighed by the creation of new ‘green’ ones in cleaner sectors.

Finally, demographic change. Ageing populations and the fiscal pressures they can bring are proof that welfare states work, not their death sentence. But low birth rates in many countries are altering family structures and creating bottlenecks in labour markets. Migration to Europe from poorer, younger countries is a possible remedy but can be politically contentious with existing populations who may feel left behind. Whether migration helps to plug gaps in the labour market or exacerbates existing cleavages over access to benefits and the dwindling supply of entry-level jobs is something that can only be solved by the widespread upskilling that governments, trade unions and employers have been loudly calling for.

Several things stand out from all this. First, the Janus-faced nature of technology, as both disruptor of production systems and labour markets, and possible solution to environmental destruction. Second is that these trends tend to reinforce each other in their impact on society leading, in the case of Brexit, Trump and Italy’s new coalition, to eventual backlash. Third, and most important, is the critical role of governments, in partnership with employers, in managing a fair and prosperous transition to a high-skilled, low carbon and globally-integrated economy not dependent on cheap migrant labour.

The necessary transformations will be large, system-wide and structural. Only governments can provide the necessary strategic direction. Contentious? Yes. Time for a big discussion? Absolutely. These ideas will be discussed at a major conference, the World(s) of Work in Transition, to be held in Brussels on 27 – 29 June. Experts on the green economy, industrial policy, training, labour markets, occupational safety, technology and migration will gather to analyse and synthesise these megatrends. Thinking systematically about them together, and in one place, will force experts and attendees to confront the policy implications of these transitions in a joined-up way.

Steve Coulter is head of communications at the European Trade Union Institute and a visiting fellow in the European Institute of the London School of Economics and Political Science.