The new US congresswoman Alexandria Ocasio-Cortez has kickstarted a debate on taxation. Arguments for high income tax rates are not punitive—but they are political as well as pecuniary.

When people complain that ‘neoliberalism’ is a meaningless concept, I point them to what has happened to the top rate of income tax since around 1980, not just in the United States and the UK but elsewhere, as the first graphic shows.

The second is a chart of the US top tax rate over the last century. The Republican president Dwight Eisenhower had top earners paying a 91 per cent marginal rate.

No doubt there are complex reasons for these reductions, but key among them has to be a neoliberal belief that cutting top rates would lead to more dynamic CEOs, who would produce more dynamic companies—and the benefits of this would trickle down to the economy as a whole. Low top tax rates would encourage entrepreneurs to take more risks that were socially beneficial and so on. The argument is so familiar, trotted out routinely by right-wing think tanks, that it hardly needs elaborating. It is a classic example of neoliberals using a bit of simple economics to justify policy that is advantageous to themselves or their paymasters. 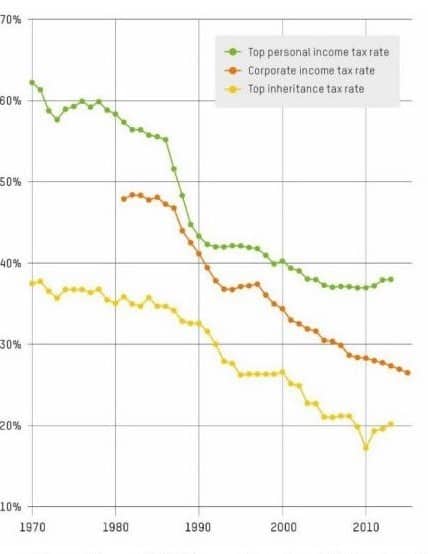 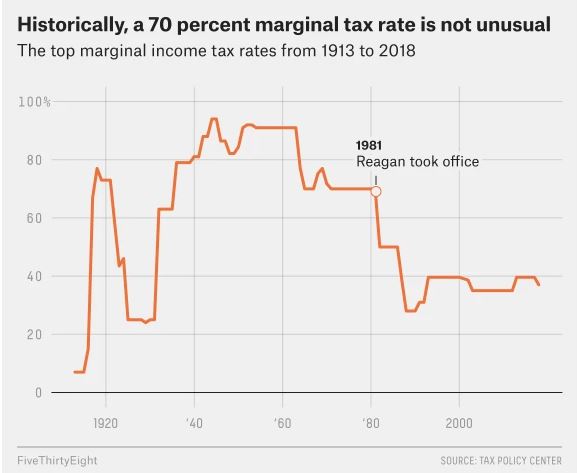 Yet the evidence for such an effect is weak, at best. The intuition for why it should be weak is straightforward. Above a certain level of income, other incentives beyond the purely pecuniary become important. Top CEOs, like top footballers, want to be successful at what they do, and more successful than others. They will want success whatever the overall financial rewards of being successful.

Another bit of basic economics that neoliberals hardly ever mention is the diminishing marginal utility of consumption. This implies quite the opposite of low tax rates at the top. It is socially much more beneficial to tax those to whom one dollar is not worth the effort of picking it off the sidewalk and transfer it to those who are poorer. A well known paper by Diamond and Saez found that, after allowing for disincentive and avoidance effects, the optimal top rate of income tax in the US should be 73 per cent.

There are two reasons why even 73 per cent might be an underestimate. Piketty, Saez and Stantcheva have argued that giving CEOs lots of money can have negative incentive effects. The CEOs start putting effort into increasing their salary rather than improving their firm. Part of one’s status comes from what one can afford. When all CEOs are taxed a lot at the margin the size of their salary has little impact on that, but when their salary is not taxed so much they can increase their salary, and therefore status, by extracting more from their own firm. To use some economics jargon, a low marginal tax rate on top incomes can be a good example of an incentive for rent extraction rather than for increasing social output.

But while an extra dollar for a CEO is not going to incentivise them in a positive way very much, one could argue that it incentivises those with talent to aspire to be CEOs. CEOs are always going to be among the richest in society, because a lot of their income will be taxed at lower rates. A paper by Lockwood, Nathanson and Weyl however turns that argument on its head. High salaries are associated with activities, such as finance and law, that have what economists would call negative externalities—they do much less good for society than the size of the salaries paid might suggest. A lot of finance, for example, is about trying to take money from other people rather than growing the size of the overall pie. If high post-tax salaries incentivise talented people into those professions, that is negative for society, which would benefit if they worked in different jobs. One can reduce this misallocation of talent by having higher tax rates on top incomes.

Neoliberals have one last line of defence against raising top tax rates in a single country, and that is migration. The argument is that talent, which could be quite mobile, will move to where it is most rewarded. There is clear evidence that this is true, to an extent. This concern does not however mean we should leave top tax rates where they are or even reduce them—simply that we might not put them up as high as they should otherwise go, while some countries that are attractive to talent continue to have low tax rates on top incomes. Sweden seems to do pretty well with a 70 per cent effective top tax rate nevertheless.

This danger of a race to the bottom with top tax rates makes it all the more important that the US raises its top marginal rate, along the lines recently suggested by the Democrat Alexandria Ocasio-Cortez. For various fairly obvious reasons the US does not need to worry too much about a talent drain if it raised top rates.

And there is a final argument for high tax rates at the top which seems particularly relevant to the US and UK at the moment. In a political system such as that in the US where money easily buys political influence, one will find some of those who earn very high salaries trying to do exactly that. This creates a kind of plutocracy. Because money can also help to buy votes, democratic elections may continue without in any way threatening the plutocracy. Even when there are laws limiting the amount that can be spent on elections, the UK shows there are ways for the rich to get around that, particularly if they control large sections of the press.

This is the argument made in an excellent New York Times op-ed by Emmanuel Saez and Gabriel Zucman. They wrote: ‘An extreme concentration of wealth means an extreme concentration of economic and political power. Although many policies can help address it, progressive income taxation is the fairest and most potent of them all, because it restrains all exorbitant incomes equally, whether they derive from exploiting monopoly power, new financial products, sheer luck or anything else.’

In a short response, the economist Greg Mankiw said: ‘[M]ost rich people I know would have been happy to spend vast sums of money to keep Mr Trump out of the White House. And many tried. The Trump phenomenon is not an argument that the moneyed elites have too much influence on politics. If anything, it is an argument that they have too little.’

But this misunderstands (as some on the left do) the nature of the plutocracy that super incomes and wealth create. It does not create a kind of committee of the very rich that between them decide who rules. It is much more erratic than that. Instead, it allows small groups among the very wealthy, who may be quite unrepresentative, to hijack a democratic system. Donald Trump and Brexit are clear examples. Mankiw is right that one way to avoid that would be to create a more representative kind of plutocracy, but a far better way of avoiding disasters of this kind is to deal with the problem at its source—by reinstating high rates of tax on top incomes.

This first appeared on the author’s Mainly Macro blog.