Broad opposition in Europe to the Trans-Atlantic Trade and Investment Partnership has prompted its supporters to summon the “protectionist” spectre. In response to the criticism of TTIP by US presidential candidates and progressive politicians in Europe they, according to media reports, are talking up the end of “free trade” that has allegedly brought so many benefits (to so few).

By contrast, we find little reporting of the considerably stronger spread of EU mercantilism, the witch’s familiar of fiscal austerity. Adam Smith defined mercantilism as government policy that seeks to “restrain imports and encourage exports”. It is as applicable to current EU austerity programmes as it was to Smith’s world three centuries ago.

In the 18th century governments used direct restrictions on imports and other market interventions in an attempt to achieve permanent trade surpluses. Governments implement the 21st century version of mercantilism with different policy instruments. In the place of direct restrictions on trade we now see real wage reductions, manipulation of business taxes, and currency depreciation through loose monetary policy (so-called quantitative easing and negative interest rates).

This “market friendly” version of mercantilism allows the ideologues to maintain the fiction of “free trade” while pursuing the mercantilist goal of persistent trade surpluses. This perverse inversion of rhetoric seeks to justify recovery in Europe based on beggar-thy-neighbour policies.

Few if any would contest the generalization that we should engage in production, exchange and distribution in response to the needs of society. Adam Smith held this view and it motivated his critique of the mercantile system that constrained the operation of market forces.

For over two hundred years opposition to mercantilist policies characterized the economics profession almost regardless of theoretical or political orientation. I can recall that when I took international trade theory many years ago at the University of Michigan, my professor (PhD under Milton Friedman) contemptuously dismissed concerns about a trade deficit. He considered a deficit a positive outcome, allowing a country to consume more than it produced.

How times have changed. The seizure of policy debates by advocates of austerity has rehabilitated trade surpluses from mercantilist delusion to competitive virtue. For the theologists of austerity the national equivalent of household prudence means consuming and investing less than a country produces. Contrary to common sense the new economic theology considers this squandering of national resources as “saving”.

The austerity theology arose out of the collapse of the eurozone economies at the end of the 2000s. Once the ideologues of austerity took control of the European Union’s macroeconomic policy, domestic demand stagnated across the eurozone. With the two sources of private demand growth excluded due to demand constraining “fiscal consolidation” (consumption and private investment), export expansion became the only possibility for recovery.

Germany provides the textbook example of export-led recovery in the era of austerity — stagnant real remuneration for the working class as a whole, a two-tier (“dual”) labour market that institutionalizes poverty-level wages, and persistently massive trade surpluses. The trade surpluses that seemed a rather curious German obsession in the 1950s and 1960s become in the age of austerity one of the major barriers to global economic prosperity.

An obvious characteristic of an export-led recovery needs emphasizing – the transition from a trade deficit to a surplus means that domestic income grows slower than GDP itself.

The table below shows two growth rates for Germany and five other euro zone countries over eight years, 2008-2015. The five are the infamous PIIGS, countries that showed varying degrees of resistance to European Commission pressure to undertake fiscal austerity in exchange for assistance to ailing financial institutions. The first column of numbers reports the usual measure of growth, gross domestic product. The second subtracts each country’s trade balance from its GDP. This might be called “domestic income”, what is left for residents after adding in imports and subtracting exports.

The last column is the difference between the two, which in all cases is negative and except for Germany substantial. The difference for Greece is the largest, overall GDP declining at an annual rate of 3.8%, while domestic income contracted at almost 6%. Ireland provides a striking case, especially because the EC austerity ideologues hold it up as a case of successful recovery. Even for this star pupil of austere recovery, the income available to Irish residents declined.

A supporter of austerity and export-led recovery might defend this growth gap with the argument that it represents a necessary “correction” after an era of profligate excess consumption thanks to the trade deficit. The chart below shows the cost of this “correction”. It gives the averages across the five PIIGS, total GDP in black and GDP minus the trade balance in red, percentage differences from 2008Q1. The nadir for GDP came after five consecutive years of decline in the first quarter of 2013 at 12% below the peak at the beginning of 2008. Three years later at the end of 2015 the average for the five had recovered to 6% below the 2008 peak.

The red lines for domestic GDP (GDP minus the trade balance) tell a different story. With household income falling in all five countries, imports declined to generate trade surpluses, first in Ireland then in the other four. As trade balances moved into surplus, domestic incomes declined much more than GDP, by 21% at the lowest point (second quarter of 2013). At the end of 2015 domestic income remained 17% below the peak, more than double the figure for GDP.

Austerity defenders might object that the chart gives a distorted picture of recovery by the inclusion of Greece with its extreme collapse – far worse than the others. Inclusion of Greece does indeed distort the results. Its inclusion leads to an understatement of the human cost impact of mercantilist recovery. 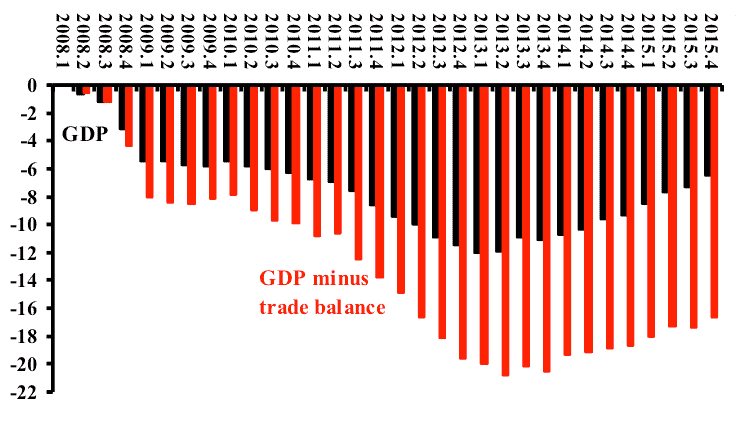 Unrequited cross-border resource transfer is the reality of export-led recovery in the eurozone. In a replay of the international debt crisis of the 1980s, the “adjusting” countries of the euro zone generated trade surpluses through compression of domestic demand. The trade surpluses functioned to service debts to foreign banks, debts incurred as a result of global financial crisis caused by many of the same banks. As in the 1980s, the solution to an unsustainable level of debt service is not unsustainable trade surpluses. The solution is debt reduction.

Export-led growth is the bad economics of the early 18th century. Reviving it in pursuit of persistent trade surpluses will fatally undermine the euro zone, then the European Union itself.