Paul Mason begins a series of columns for Social Europe on the theme of postcapitalism and society, stressing the urgency of a new economic model. What characterises the present moment in history is a pervasive sense of unrealism among elites. Official discourses are no longer used as guides to action, laws are not applied and regulations are ignored.

The ultimate symbol of the unrealism in the world is contained in two graphs. The first is the projection by the United States’ Congressional Budget Office of the ratio of debt to gross domestic product until 2048.

Figure 1: debt-to-GDP ratios in the US 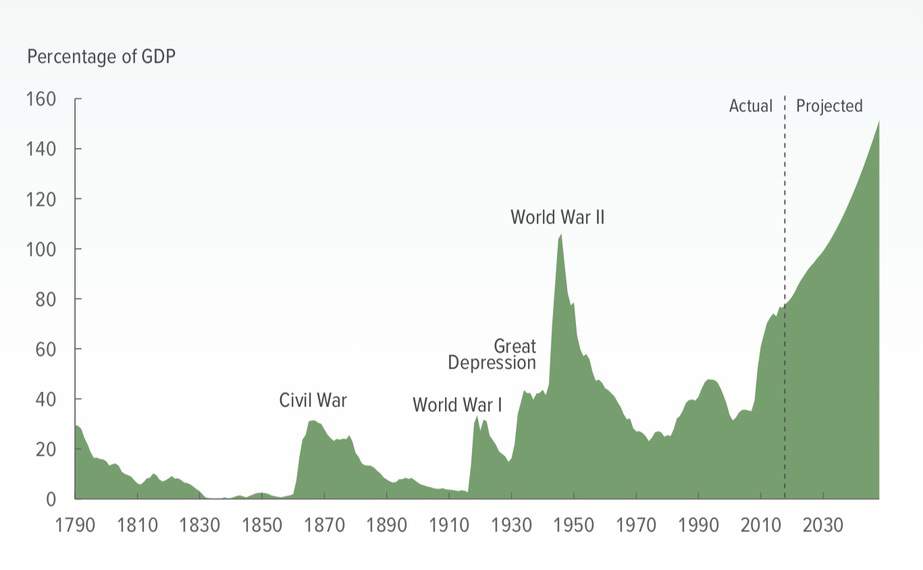 It projects wartime debt levels by 2030—except in peacetime—primarily driven by the US’ determination to go on spending on defence, social security and Medicare without raising taxes as a percentage of GDP. Unlike in the second world war, there is no realistic plan—or even stated intention—to shrink this pile of debt. For the first time in the history of industrial capitalism, a major economy is building a debt pile in peacetime which it has no realistic way of shrinking.

On the CBO’s projections, over the next 30 years US GDP will grow from $20 to $65 trillion, while its debt will mushroom from $16 to $97 trillion. The deficit would then stand at 8 per cent per year—prompting demands from mainstream economists for austerity on a scale unsustainable in today’s America. The underlying assumption is that the US population will accept a collapse in its living standards, the world will go on buying the USA’s paper or the state will print money as the way out of insolvency.

Now take a look at the second exhibit—a chart from the Intergovernmental Panel on Climate Change showing how dramatically we need to cut CO2 emissions over the next 20 to 35 years if we are to avoid catastrophic and uncontrollable breakdown. 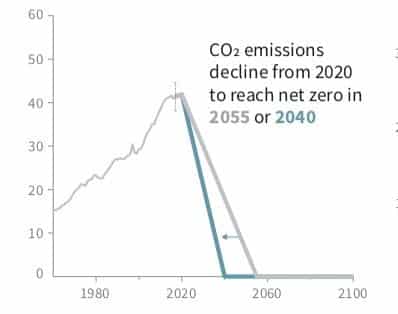 To achieve this, says the IPPC, ‘would require rapid and far-reaching transitions in energy, land, urban and infrastructure (including transport and buildings), and industrial systems’—requiring ‘significant upscaling of investments in those options’.

The single strategic question facing humanity is whether the heavily indebted countries of the developed world are prepared to find the resources to make this transformation. The subsidiary question is whether we’re prepared to destroy the political influence of fossil-fuel industries and tax-avoiding finance industries to do so. Until we answer those questions, we are perpetuating the culture of unrealism.

In the USA a powerful new movement has arisen which wants to achieve this. The Green New Deal, published as a bill in Congress by the new New York representative Alexandria Ocasio-Cortez, pledges ten-year spending commitments which its critics have totalled up to an extra $6 trillion per year. The proponents of the GND baulk at that figure. According to so-called modern monetary theory, they argue, the price is payable in all circumstances by issuing debt and printing money, and therefore the figure is irrelevant.

Though I applaud their chutzpah, it’s based in a way on the same assumptions as the fiscal policy of the president, Donald Trump—that fiat money allows the state to overcome traditional debt dynamics forever. Put another way, the internal dynamics of a capitalist market system—in which at some point high debt engenders instability and currency depreciation, and the government’s cost of borrowing spirals out of control—can be escaped by fiat.

The only way of injecting realism into this debate is to ask a question which neither members of the Davos economic elite nor progressive Democrats—nor even most of the environmental movement—are prepared to contemplate: are the solutions compatible with capitalism?

In Postcapitalism: A Guide to Our Future (2015), I argued they are not. The biggest problem for the debt sustainability of the US (or for that matter Japan and the eurozone) is not whether the finance system can be kept alive by fiat money. It is that information technology is in revolt against the social and economic institutions that surround it.

There is too little value generated in an informational-capitalist economy to justify the size of the current debt pile, the continuing deficits or the fiscal projections of major states. Infotech creates exponential falls in the production costs of information, information goods and some physical goods and services. It produces vast quantities of utility for free, through network effects, and tends to democratise and cheapen innovation.

It suppresses the normal adaptation mechanism, whereby innovation produces new goods with higher input (including labour) costs and which allow of higher-wage employment. In addition, automation has the potential to eradicate 47 per cent of jobs or 45 per cent of activities.

In the past 15 years we have built a highly dysfunctional system, which is unsustainable on all traditional assumptions. It is a system of permanent single monopolies, with massive rent-seeking and financial exploitation, the creation of low-wage, low-skilled jobs designed to keep people inside the system of credit and data extraction, and massive asymmetries of power and information between corporations and consumers.

As a result, the long-expected takeoff of the fourth industrial revolution isn’t happening. No matter how much Schumpeterian economists predict its imminent arrival, if only states would take a more active role in industrial co-ordination, it cannot happen inside a heavily-indebted and monopolised global market economy.

Thus, alongside the transition to a zero-carbon economy, we need a rapid system redesign—in which the market sector shrinks in relation to the public sector, a non-market collaborative sector emerges, money ceases to function as a store of value and there is a rapid reduction of hours worked within the wages system.

If you stare long enough at the debt projection for the US and at a chart like Figure 3—showing how rapidly humanity has screwed the world by using it as a wastepipe for carbon-heavy processes—it becomes obvious that capitalism has reached a crunch point. It is too indebted to go on as normal and too structurally addicted to carbon. Those who are owed the debt, and those who own rights to burn the carbon, are going to go bankrupt or the world’s climate will collapse.

In the medium term we need a different form of capitalism. But it will be neither stable nor permanent. Even this will have to be created through something that will feel like a revolution. It will need to disincentivise carbon use while massively redistributing wealth and allowing the global south to go on developing—and overcome the massive structural distortions created by tech monopolies, rent-seekers, financial speculators and data-hoarding states and firms.

Moving to postcapitalism does not entail eradicating market forces overnight or accepting the command-planning methods of Soviet economics. The aim is to design a controlled transition in which market forces cease to operate as the primary allocator of goods and services on the planet, in which the state shrinks and the debt mountainis are dismantled.

Information technology will facilitate a move beyond scarcity in large sectors of the economy. Climate change demands we eradicate certain forms of carbon use. The debt dynamics of the world, combined with the ageing problem, mean we need something more radical and sustainable than fiat money and a debt pile that will never be paid down.

When I warned, in Postcapitalism, that if we did not ditch neoliberalism it would break up globalisation, the Financial Times called this ‘unnecessarily shrill’. It was not shrill enough, it turned out.

With Trump pulling the US out of the Paris climate accord, his Brazilian counterpart, Jair Bolsonaro, prepared to torch the Amazon and powerful movements across Europe to protect lifestyles based on the diesel-fuelled car, only a new, big, global idea is going to turn the situation around.

In these columns for Social Europe I will outline what that means for the new progressive political alliances which need to form, how they need to fight the coming culture war intelligently and why the state—so long neglected by environmental and social-justice movments—stands at the centre of the solution.

The twin technocratic assumptions of our time—that the current social system can deliver zero carbon and that fiat money can offset rising debts forever—are what makes so much policy-making pervasively unreal. We need to get real.