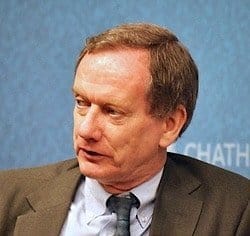 To what extent do the problems illustrated by the Greek debt crisis threaten the future of the Eurozone? Iain Begg writes that while the prospects for Greece continue to be deeply uncertain, the wider reforms that have been pursued across the Eurozone since the crisis ensure there is still reason for optimism about the future of the single currency.

Since 2009, when the extent of the problems in Greece’s public finances first became known, Europe’s leaders have struggled to contain the ensuing crisis. The latest episode culminated in an agreement last month on yet another bailout for Greece, on condition that Greece implement yet more public expenditure cuts and accelerate its programme of economic reforms designed to improve the growth potential of the economy. These reforms will be challenging and many critics are already predicting failure leading to a further round of difficult negotiations.

Against this gloomy backdrop, it is easy to be pessimistic about the chances of Greece staying in the euro and even about the long-term survival of the Eurozone. However, what is too easily overlooked is the strength of the political commitment to make a success of the euro, with both creditor and debtor countries agreed that an unravelling of the currency will not solve their problems. In addition, there have been significant changes in the governance mechanisms of the euro which give grounds for optimism. Even the UK, so often reluctant to participate in the deepening of European integration, has supported these initiatives, despite being outside most of them.

Several explanations for the Eurozone’s difficulties have been put forward, some focusing on fundamental design flaws, some on policy mistakes and others on political problems. Procrastination in confronting the crisis has also been evident, and even in the latest deal on Greece, it was clear that many euro members were torn between their own national interest and the common interest. The Greek leadership had not only miscalculated the strength of its bargaining position, but also upset many of its partners by the tone it adopted, especially towards Germany. But objections to the Greek demands were even greater from countries as different as (rich) Finland and (poor) Slovakia as from Germany. Quite simply, the others did not trust the Greeks.

An underlying explanation is that the architecture of the Eurozone was always an uneasy compromise between competing national views on what was desirable. Unlike other monetary unions, the Eurozone was deliberately set up without any formal system of fiscal transfers between members of the sort that could have helped to deal with divergences in economic performance. By contrast, in the United States, if a state experiences a sudden downturn in its economy, for example because one of its key industries faces difficulties, additional spending from federal programmes is triggered automatically. Such transfers mitigate the effects of the downturn. Europe also has relatively limited flows of labour between countries, and private financial flows are markedly lower than elsewhere, meaning that other potential adjustment mechanisms are inadequate.

At an institutional level, elements that were lacking when the euro was launched were a lender of last resort function from the European Central Bank (ECB), the absence of tools for crisis management and no source of loans for countries (initially Greece, but also Ireland, Portugal and Cyprus) which faced a liquidity crisis. In fact, one of the features of the euro’s design is what is known as the ‘no bail-out clause’, a treaty article that prohibits both the ECB and other governments from directly buying the sovereign bonds emitted by euro member governments. These deficiencies were, to a considerable extent, disguised by the rather benign global economic conditions of the period from 1998-2008, greatly helped by the growth of China – a period sometimes referred to as the ‘great moderation’.

The comparative success of the euro during its first decade, both in maintaining price stability and in facilitating steady growth, proved to be built on shaky foundations. In much of southern Europe steady economic growth seemed to have been achieved and, in one of the many paradoxes of the euro’s history, Germany was seen by many as the ‘sick man of Europe’ until as late as the mid-2000s. With hindsight, though, it is now obvious that southern Europe was becoming increasingly uncompetitive. Unit labour costs, a measure of the cost of producing goods and services, had been rising continuously in the Mediterranean countries between the launch of the euro and 2008, but had been stable in Germany.

The annual change was small, with increases of two to three percentage points, but over a decade, the cumulative effect was substantial. By 2008, the increase relative to Germany was as much as 25 per cent, so that it should not be a surprise that the balance of payments positions of countries like Greece, Portugal and Spain had become alarming, with all three reaching deficits of 10 per cent or more of GDP by 2008. Financial markets, however, did not seem worried, with bond spreads converging during the first half of the 2000s and more money invested in these countries. In addition, the monitoring of individual Eurozone economies by the European authorities was lax.

Spain and Ireland were also hit by speculative bubbles in the property market which resulted in bank failures and meant that the national governments had to bail out their banks. In the cases of Ireland and Cyprus, the cost was too high for them to bear and the state then had to be bailed out by the rest of the Eurozone. Spain narrowly avoided a similar fate, but still needed some support to rescue its banking system. These difficulties highlighted the absence of a Eurozone banking union and the inconsistency between a common currency and separate national banking systems.

How, then, can optimism about the future of the euro be justified? The answer is that Europe’s leaders have been introducing far-reaching reforms intended to improve the resilience and effective management of the single currency. Indeed, since 2009, another paradox of the euro is that while the rest of the world sees only dithering, denial and double-dealing, the pace of governance reform in the Eurozone has, at times, been frenetic. New measures have been introduced to strengthen national fiscal discipline and to improve the coordination of fiscal policy, and a procedure for identifying and, if required, correcting other sorts of macroeconomic imbalance – backed by the threat of financial sanctions for backsliders – has become law. A new loan fund to support countries in difficulty has also been established.

Significant steps towards creating a banking union have been taken with the agreement of a new structure for prudential supervision of banks (the single supervisory mechanism, with the European Central Bank at the pinnacle of a network of national supervisors), and a common approach to resolving failing banks (the single resolution mechanism). By taking on these and other new responsibilities, the European Central Bank is slowly becoming a fully-fledged central bank, rather than a mere custodian of price stability, and the first elements of a capital markets union are being introduced.

Many of these new measures remain to be properly tested and there are bound to be concerns about their effectiveness, not least because of past experience of non-compliance, including by Germany. Nevertheless, there are good reasons for believing that the Eurozone’s leaders have made such substantial changes that – to misquote the American author, Mark Twain – rumours of the euro’s likely demise are greatly exaggerated.