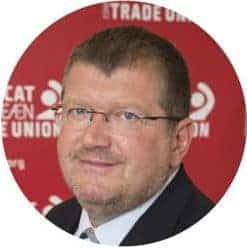 The German economy is flourishing, with growth expanding throughout 2017. Unemployment, at under 4 per cent, has never been lower since German reunification in 1990 and equals one of the lowest rates in the EU. Businesses are competing to recruit staff. The employment rate is second only to Sweden’s, and productivity, too, is above the EU average.

Germany’s largest union, IG-Metall, has therefore chosen the right moment to mobilise around its demands for a pioneering new collective agreement coupling higher pay with the right for individual workers to reduce their working time to 28 hours a week.

From April 2018  a pay rise of 4.3 % and a one-off payment of 100 Euros for Jan-March. From 2019 400 Euros plus 27.5 % of a monthly wage/salary. Workers with children in full-time education, caring for parents or working night shifts can choose whether they want to take the extra money or take eight days off. Two days are paid by the employers. In addition, all workers can reduce working time (unpaid cut in hours) to 28 hours for a two-year period. After that they have the right to return to 35 hours. The agreement is valid till 31 March 2020. The agreement has been signed in Baden Württemberg and will cover 900.000 metalworkers/engineering staff. In the event it is endorsed by the other negotiating districts in Germany (which usually is the case) it would become valid for 3.9 million metalworkers/engineers.

IG-Metall has shown it can mobilise tens of thousands of workers to take strike action in support of their demand for more flexible working hour, and for the right to invest time in families and private life (work-life balance), even if that means a slight reduction in salary. In total 1.5 million metalworkers came out on very visible action in front of company gates and in city centres. It was a decisive step that IG Metall directly consulted its members about the demands. This was a contribution to more ‘direct democracy’ that in turn guaranteed the reliable support of the members when strike action was needed and that sets a strong precedent.

Metalworkers have called a series of 24-hour strikes to back their campaign. The salary levels they have already achieved are in no small measure due to sound trade union organisation and collective bargaining. In other sectors, especially services, union organisation is much weaker and here – as Reiner Hoffmann, Chairman of the German trade union confederation DGB pointed out in a recent Financial Times interview – wages have stagnated or even fallen. Germany has the biggest low-wage employment segment in Western Europe, and consequently a serious problem of pay inequality. The European Central Bank and the IMF have already highlighted how low wages are holding back domestic demand and slowing growth across the EU, and that is why the ETUC’s ongoing Pay Rise campaign aims not only to tackle low pay but also to promote economic prosperity. It is unacceptable for taxpayers to be expected to subsidise poverty-pay employers through welfare benefits. German unions are demanding an end to precarious work and the growth of insecure, short-term employment. In 2017, one in every two new jobs was on a temporary contract.

Regardless of the favourable economic conditions, employers will always claim it is the wrong time to take strike action – there is never a right time for them to share profits, or invest in good, modern working conditions for the future. The metal industry agreement fits well into the framework of the European trade unions’ agreement with employers at European level on “fostering active ageing”, which calls for “measures and working conditions to encourage and enable older workers to remain longer in, or come back to, the labour market” – including flexible working. It is incomprehensible that German for the most part have been so stubbornly opposed to more flexible working. Indeed, they have made a pay offer, but refuse to budge on the issue of work-life balance.

The lessons workers and trade unions in Europe can learn from this successful round of bargaining are obvious. A prerequisite for all negotiations is the bargaining power which is generated by a well-planned strategy, high trade union density and, of course, a favourable economic environment.

In Germany not only trade unions, but also a considerable part of the public and media see the agreement as a landmark for a new type of collective bargaining approach. Certainly 24-hour strikes are novel. In the past “warning strikes” have been economic pinpricks (Nadelstiche) designed to underline the seriousness of union demands. In a situation where the order books are full, and companies are working at full capacity and some post even record output, a 24-hour strike does seriously hurt the balance sheet. To increase the pressure at the right moment is essential. Strategic planning and having reliable supporters able to deliver strikes helped bring about the successful negotiation. Important too was public acceptance of the demand for more flexibility in working time arrangements. A society where demographic change is challenging child care, education and elderly care systems trade unions asking for more sovereignty over individual working and time-off do have the sympathy and support of public opinion. Since the engineering industry in general is doing well a tangible pay rise is accepted too.

The agreement underlines once again how important it is for a trade union to have as many members as possible organised in the respective industry. Membership density counts. The ability to throw a spanner in the works is key. The demands must reflect the real needs of the members and what members are asking for. For the leadership it means having their ear as close as possible to what the members are saying. Membership involvement is the recipe for lasting support.